Black Lives Matter. Please, say it out loud if you have never before.

You and I are not special or noteworthy for being willing or able to say this. Saying it does not create action or change. It does not pledge our allegiance to a specific movement. To get to a place where America is ready to take action to protect and value black lives, we must first believe there is value. To believe a thing, we have to acknowledge it. To acknowledge it, we must say its name. 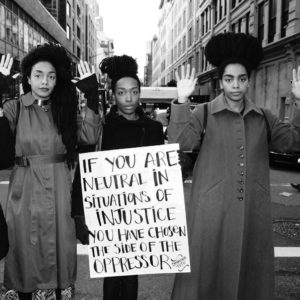 Let me stop some of you before you chime in with “All Lives Matter!” Indeed, all lives do matter! All of the time, all lives matter. Happily, we can agree on that. However, at a point some of those lives may be more critically endangered, more systemically oppressed, more widely undervalued than some others.

This is one of those occasions. I think it’s good and right to be able to say “Black Lives Matter” and to allow that to focus conversation and action. It doesn’t erase or neglect all lives, just as Feminism is about an end-state of equality for all, including men.

I really look forward to being able to say “All Lives Matter” in America and knowing everyone means it the same way. Until we get to that point, as a society of firefighters trying to quell the flames of injustice we need to turn the majority of our attention to the one house that has been burning brightest, hottest, and longest.

It is the house of that of the black community – perhaps too apt an analogy, considering that arson attacks against historically black churches are just one indicator that not everyone understands or believes that Black Lives Matter.

Because they do. Black Lives Matter.

Last night a terrible, heart-rending thing happened and for once the entire world saw it through the same objective eyes.

A black man named Philando Castile was driving his girlfriend and their daughter in his hometown of Falcon Heights, outside Minneapolis Minnesota, when he was stopped by a police officer due to a broken taillight on his car. Per his girlfriend’s account, when the officer approached the front of the vehicle, Castile advised him that he had a permit for a concealed weapon and that he would be reaching for his wallet.

The officer shot Philando Castile in the arm and kept shooting three more times. His girlfriend, Diamond Reynolds, began broadcasting the event to the world with steely calm moments later via Facebook Live. Here is an excerpt from New York Times television critic James Poniewozik’s review of the broadcast:

These are the first words that Diamond Reynolds speaks to her dying boyfriend, Philando Castile, in her video on Facebook Live. He’s slumped in the driver’s seat, blood soaking his white T-shirt, a police officer pointing a gun through the car window, as Ms. Reynolds’s 4-year-old daughter sits in the back seat.

First Ms. Reynolds calmly gives her description of what happened: They were pulled over on Wednesday for a broken taillight in Falcon Heights, Minn.; Mr. Castile told the officer that he had a licensed firearm and reached for his identification, and the officer shot him.

When the video begins, Mr. Castile is moving. A minute later, he’s still and slack. She worries that he is already gone.

Philando Castile died early this morning from his gunshot wounds. It is the day before his thirty-third birthday. END_OF_DOCUMENT_TOKEN_TO_BE_REPLACED