Wonder Woman has always been my favorite super hero.

I’m not sure how it got that way. I had her Super Friends toy. I had seen the Lynda Carter show in syndication.

The thing I remember most is a library book. I still have it, actually, on my now bookcase of comics. It was a collection of her earliest strips from the 40s. We had checked it out of the library so many times that I was under the impression it was my personal copy. I suppose my mother finally told them I had misplaced it somewhere and paid the fine so I could keep it.

(Don’t judge her too harshly – It wasn’t so easy to track down obscure books back then! Also, we didn’t really have the money for that sort of thing.)

My love of Wonder Woman never expired, but I’ve never loved her comics the same way, aside from a thrilling mid-90s reimagining by William Messner-Loebs and Mike Deodato, Jr. I know I’ve missed a lot of Wonder Woman comics in the interim, and if DC could get their heads out of their asses on reprints maybe I could catch up on them.

The relaunch is the perfect chance to launch Wonder Woman to the heights she belongs – equal to Superman and Batman, the holy trinity of the DC Universe.

Is her new number one issue up to the task? 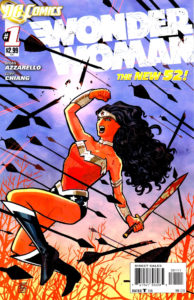 In a Line: “Failure… what a horrifying end to an endless life.”

Wonder Woman #1 is an interesting comic book, but it’s simply not worthy of the redebut of one of DC’s holy trinity of heroes when we’ve seen absolutely stellar books from her compatriots Superman and Batman over the past two weeks.

Brian Azzarello’s story is slight on script but full of action, both dramatic and in battle. It features a girl marked for death by a Pantheon of forces, a certain horror of growing centaurs out of horses’ necks, Hermes carrying around a Portkey to Wonder Woman, and a rogue son of a god who makes his own oracles from scratch. The elements hint at the possibilty of spectacular plots to come, but this issue is merely moving pieces into play on a chess board. 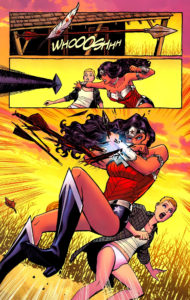 I had major doubts about Chiang on Wonder Woman. He acquits himself adequately, but I don’t know that he merits all the many unscripted panels he gets here. His figures have a certain plainness to them that’s half DC animated half hieroglyphic, with thin limbs and angular features. A lot of his edges have a rough, unfinished look, which looks great on environments but can be a little off-putting on characters.

What Chiang does get right is Wonder Woman – to a tee. He lets her look Amazonian while still staying svelte, and manages to convey coyness even when she’s standing bare naked in the middle of a room. The handful of panels of Diana in action will get your heart racing – Chiang is much better on action than conversation. It’s a pity she’s not in her own debut a little more, as whenever she is she’s magnetic.

As for the cover, I cannot bring myself to like it. Diana’s figure is too far left looking off the page – it feels like half of an image.

Azzarello might be the writer to pluck Wonder Woman from the rut she has been in for the past year, but it is going to take him a few issues to get there. Buy this first one only if you have the patience to hang in for the next few months.