Take The Flash, for example. On one hand, it’s a snap to translate him across mediums. No dark origin. No alien lineage. No link to Greek gods or convoluted weakness. The Flash is super-fast. That’s all you need to know.

The problem that arises is which way writers take that simplicity. Make a simple hero too pedestrian and he’s effectively a beat cop. try to craft too much mad science and mythology around a simple hero and the concoction collapses under its own way.

DC has visited both sides of the spectrum with The Flash, most recently using him as the impetus for their line-wide relaunch with their special event, Flashpoint. I have no interest in that Flash – running through time with his super-speed.

I refuse to believe that there aren’t enough challenges on Earth a little more complex than bank robberies but still not a synch to solve with super-speed alone. Surely there’s a place for a straightforward hero without making him boring or unbelievable. 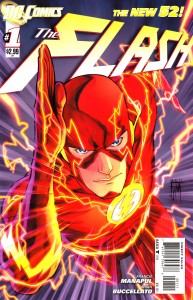 In a Line: “Somebody please tell me I don’t have a homicide with Flash’s fingerprints on it!”

The Flash #1 is a beautiful, energetic, fun first issue that frames The Flash as both a hero and a human, who is caught within tricky mystery his speed cannot immediate solve. 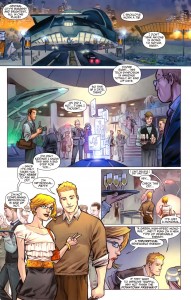 Francis Manapul and Brian Buccellato write a seemingly simple story that’s full of deft turns, introducing Barry Allen’s world in layers. First they set the place, then a name, then the nature of their hero, before finally evoking the red frictionless suit to get the adventure underway. You go from zero to Flash expert in a matter of pages – or, at least, expert enough to never feel left out even without a coddling origin story.

I realized all of that after my read was through. What struck me in just a single panel is the beautiful art of Manapul and Buccellato and the intrinsic, compelling link between the art and the script.

The issue practically glows, and I can’t explain why. It’s the mix of Manapul’s background elements that don’t seem to have any lines at all with slick foreground characters rimmed in thick black lines like mascara. They fairly leap off the page. 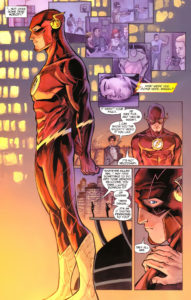 Meanwhile, Buccellato’s colors don’t look like typical comic colors, but instead seem like color pastels rubbed onto the page and then illuminated from below with a lightbox.

Maybe it’s the gala event Barry is attending at the beginning of the issue, but Manapul’s character designs have the retro simplicity of Mad Man – or, at least, their animated Mad Men Yourself app. His Flash is attractive out of costume, but stunningly handsome in it – a blue-eyed everyman Adonis you can’t help but cheer for.

Flash might be the fastest man on Earth, but that doesn’t make his world any simpler. His hot nerd first date with co-worker Patty Spivot is interrupted by masked mercenaries and he’s being hunted in and out of costume by persuasive reporter Iris West, but first he has to do his job and crime-scene-investigate the merc who mysteriously died after Flash kinda saved him from a deadly fall by throwing him through a building, except for the dead guy is an old friend of Barry’s, which makes their next conversation a little complicated.

Got it? And that’s just in the first half of the issue.

The Flash lives up to its hero’s name with a kinetic first issue that’s easy to consume in a blink, but both the story and the art warrant a more slow-motion read. It sets up a mystery without being a major brain-teaser like some of the other amazing books out from DC this month. What it is is good clean fun in comic form that you can love equally as a kid or an adult – which is exactly the best way to frame a Flash comic. Manapul and Buccelatto seem like they were born to bring this hero to life.