The tastes of many American snack foods have become a distant memory after five years spent living in New Zealand.

A few familiar American snack brands make it to our remote shores and supermarket shelves, usually via companies with an Australian outpost. We can buy Cheerios and the occasional Fruit Loops, and there are $13 pints of Ben & Jerry’s to be had for the big spenders, but the vast amount of familiar expat snacks are absent from most Kiwi grocery stores

Mostly I don’t mind. My solution has largely been to cook a lot more meals and to eschew snack foods like cookies, chips, and crackers entirely. Why start a fresh snacking habit when I can instead scan down an aisle of unfamiliar cookie packages and not know what a single one of them taste like?

Being oblivious to local brands is a terrific diet. 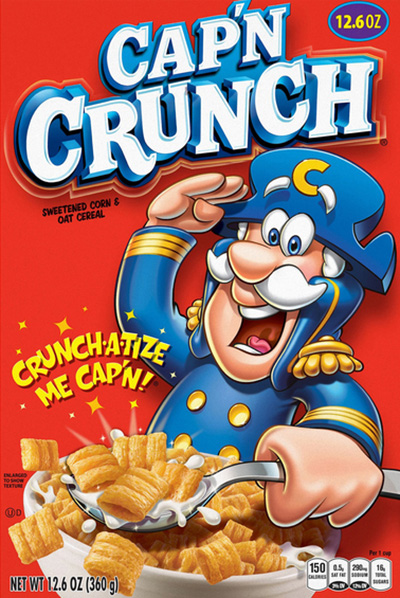 The one kink in this flawless snack free life is that I sometimes catch myself regaling the kid with one of my distant snack food memories. As she has grown older I’ve realized how many of my stories tie to specific foods, like the routine of buying Twizzlers every time I went to the movies (and how it’s essential to enjoy them when they are fresh) or the excitement of discovering I had a Tastykake Butterscotch Krimpet in my lunch (and the process of rubbing them against your shirt to make sure the frosting wouldn’t get stuck to the plastic).

While I don’t necessarily miss the indulgences I describe to her, I do sometimes regret that I can’t give her the same experiences. I don’t need her to like all of the same snacks as me, but being unable to give her the opportunity to turn her nose up at them makes me feel like I’m missing some essential aspect of the parenting experience.

One snack in particular, has come up again and again in these conversations: Captain Crunch cereal. Yes, I know the actual name is “Cap’n Crunch,” but I’m not typing that repeatedly. It’s undignified for a man of the Captain’s position and tenure.

I explained the mouth-shredding experience of eating Captain Crunch to the kid at least a dozen times over. I’m uncertain why Fruit Loops were able to make the ocean-spanning journey to our shores and stores while the good Captain – himself a seafarer of some renown – could not. New Zealand loves peanut butter!

(E’s theory is that Captain Crunch (actually, a Commander) is obviously modeled on historical colonizers, who aren’t as welcomed as junk food mascots here as they are in the states. My theory is that because Kiwis don’t dip cookies in milk, they simply aren’t interested in more cookie-esque cereals since there’s no built-in allure to eating a bowl full of them.)

Occasionally I’ll fall down the internet rabbit hole of looking into buying Captain Crunch by the case. Even in bulk, the cost of having it shipped to New Zealand is prohibitive. Plus, I’d be crushed to find out that customs had incinerated a case of contraband cereal for violating some form of border integrity (which has happened to E before while trying to import spices).

It was these memories (and cravings) for the Captain that found the kid and I staring into the tantalizing maw of US import store in our local shopping center a few weeks ago. It is tucked into an odd corner of the parking lot such that I don’t usually need to walk past it, but a rainy day of household errands had us scurrying from from awning to awning to avoid getting soaked.

There we were, slightly damp and slightly breathless, peering through the window. There was the Captain, his smiling face splayed across a row of familiar red boxes, smiling back at me. It was the first time I had seen him in person in almost five years. END_OF_DOCUMENT_TOKEN_TO_BE_REPLACED