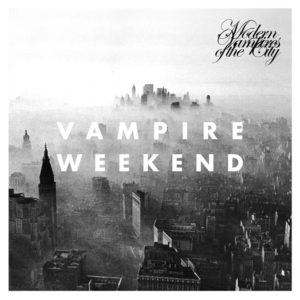 The first reason, and the most obvious, is that they visited our house to play Catan (which we bought for the occasion!) just a few hours before E went into labor. I’ll never be able to think of EV’s birth without thinking at least a little bit about The Crutchleys, Catan, and eating an entire Domino’s pizza all by myself in installments between E’s contractions the next morning.

The other reason is Modern Vampires of the City.

Two months earlier, we were paying The Crutchleys a visit in May for an evening of chat and games in May just after the LP was released. When the discussion turned to music, P said, “Oh, have you heard the new Vampire Weekend?”

I might have shrugged my shoulders in response. I liked the band’s second effort Contra well enough, but I had never had a particular epiphany with them like many of my friends did. Yes, they had an awesome vocabulary and plenty of baroque flourishes, plus an obvious affinity for Paul Simon. It was just that none of their songs really stuck to me.

(Also, I do give a fuck about the Oxford Comma.)

There was something different about Modern Vampires of the City from the opening notes and typewriter percussion of “Obvious Bicycle.” Vampire Weekend transformed from crafting baroque confection with endless streams of melody rocketing in all directions like silly string to wringing emotion from subtle veins of countermelody marbled through each of their songs.

That night, “Don’t Lie” stuck to me. I couldn’t remember the last time I heard something so beautiful and tragic, from the initial sigh of organ like the slow exhalation of breath, to the clipped heartbeat of massive-sounding kick and snare, to the elegiac slow surf guitar out of the outro, but nothing more than the chorus:

I want to know, does it bother you?
The low click of a ticking clock
There’s a lifetime right in front of you
And everyone I know

I feel that chorus thrumming in my cells. I’ve always held a nearly visceral terror of the click of a ticking clock, time made tangible as sound as it slips away never to be grasped again. One of my primary concerns during our pregnancy was time. How was I going to get by with so much less time?

Later in the song, that chorus transforms:

I want to know, does it bother you?
The low click of a ticking clock
There’s a headstone right in front of you
And everyone I know

Those are the dual truths of time, laid bare in a pair of chorus. Everyone you know has both a lifetime and tombstone in front of them, but the great Rorschach test of life is asking someone which one they see when they hear the ticking of a clock.