I’m back with a third installment of the ultimate X-Men omnibus mapping, finding a way to squeeze just about every issue of X-titles into a cohesive bookshelf of handy omnibus volumes.

Okay, they’re not actually all that handy. Most of them could probably be wielded as a deadly weapon.

Today’s era begins with Grant Morrison’s run on New X-Men starting on #114 in 2001 and ends with the final issue of Joss Whedon’s Astonishing X-Men, which is the last thing that happens to any X-Men prior to Messiah Complex. Of course, there are a lot of other series contained in that material – you’ll immediately note that neither of those historic runs address a single issue of Uncanny X-Men!

Every one of those issues is covered in this post. Why? To give you ideas for the The Most Wanted Marvel Omnibus Secret Ballot, where you vote for the comic runs you’d most like to see in an oversized format. Monday I covered all of X-Men from 1963 to 1991, and yesterday I covered 1991 to 2001.

There are 25 potential omnibus volumes in this material! Many of their contents are high debatable, but that’s part of the fun – collected edition mapping is a contentious pastime. Heck, I don’t even agree with how Marvel does things half of the time! If you have a correction or disagreement don’t hold back – sound off in the comments below.

Now, prepare to be fully educated in the seedy underbelly of this period of all-star X-Men writers, including some books I am sure you never knew existed unless you are a superfreak of a walking Encyclopedia-X like I am.

END_OF_DOCUMENT_TOKEN_TO_BE_REPLACED

The definitive, chronological, and up-to-date guide on collecting the original Chris Claremont era of X-Men comic books via omnibuses and trade paperback graphic novels. A part of Crushing Krisis’s Collecting X-Men: A Definitive Guide.Last updated April 2016 with titles scheduled for release through December 2016.

X-Men did not officially become Uncanny X-Men until issue #142. However, the cover bore the “Uncanny” adjective starting with #114. Ultimately, many fans and comics resources refer to the entire relaunch from issue #94 forward as Uncanny X-Men – a convention Marvel upholds with the titling of their Marvel Masterworks reprints. 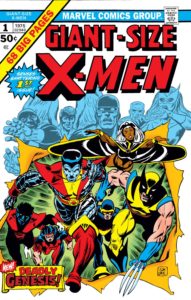 This era is indisputable as the most classic era of X-Men, as well as generally considered as one of the best comic runs of all time. The vast majority of thematic material later expressed in other forms of X-Men media including films, games, and toys originated in this run.

It all begins in 1975 with Len Wein and Dave Cockrum on Giant Size X-Men, which introduced well-known characters such as Wolverine, Storm, Colossus, and Nightcrawler. Chris Claremont took over writing duties just a few issues later. Under his pen, the trio of Wolverine, Storm, and Colossus would persist throughout a historic 16-year run that saw X-Men go from a marginal book returned from cancellation to the most-popular comic in America.

The latter half of Chris Claremont’s landmark run on Uncanny X-Men begins with Storm usurping leadership of the team from Cyclops, who leaves the team for X-Factor. That means none of the original five X-Men star in this period of the book. Storm, Wolverine, and Colossus have seniority, and the team features some lesser-known characters such as Longshot, Dazzler, and original-body Psylocke, while introducing Jubilee, assassin-body Psylocke, and Gambit.

That period bears a distinctly more dark and rebellious tone, with 21 issues passing with no X-Men team in existence! It also introduces the idea of both X-book and Marvel-wide crossovers with Mutant Massacre, Fall of the Mutants, Inferno, and X-Tinction Agenda.

This is Marvel’s most-collected run of comic books, which is both a blessing and a source of great confusion. There are a few specific formats of books that cover large portions of this title, and I’ll cover those first – Essentials, Epics, Masterworks, and Omnibuses. END_OF_DOCUMENT_TOKEN_TO_BE_REPLACED