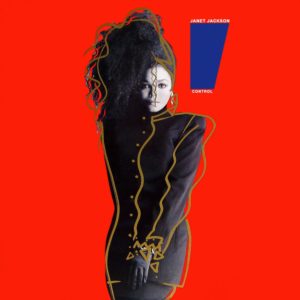 Her 1982 self-titled solo LP gained minor notice, but her 1984 pop follow-up Dream Street was an umitigated flop. Instead, she was known as the sassy little sister from The Jackson’s appearances on variety shows (including their own) who had blossomed into a talented TV actress on shows like Good Times and Diff’rent Strokes.

I have to think that Control’s lead single “What Have You Done For Me Lately”  hit radio like a bomb blast – especially in a Jackson void with Michael deep into a between-records lull.

Control was the perfect breakout album for 20-year-old Jackson – not mature so much as aware and outspoken with songs like “Control” and “Nasty.”

Also, the video for “What Have You Done For Me Lately” was Jackson’s first choreographed by Paula Abdul (who had choreographed Janet’s brothers on their Victory Tour), although I must emphasize that this is an early work.

Yes, the video is cheesy to the max – peak 80s with the slick cool of the 90s not yet in sight. Yet, it confirms Janet’s star power from her TV experience and presages her subsequent years of absolute video dominance. Her execution of Abdul’s choreography is tight and full of attitude.

And then there’s the sound. 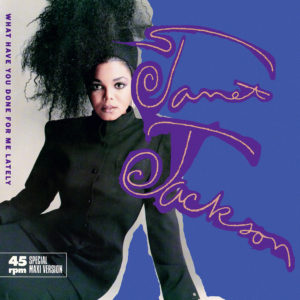 This song introduced Janet’s collaboration with Jimmy Jam and Terry Lewis, a sound dominated by layered, multi-octave vocals to make her voice sound bigger than it actually was. It’s driven by a two-note bass riff and relentless every-beat assault by drum machine snare and cowbell. The sparse, staccato keyboard chords barely register as anything but countermelody.

The chorus of “What Have You Done For Me Lately” is one of the most deadly earworms in pop music. It’s so simple. It pounds the 5th on “what have you do”, climbs to the minor 7ths “done for”, tickles the root on “me”, and descends. What solidifies the worminess is the “oo, yeah” – it ascends from a 6th to the major 7th instead. So, while neither line is as discordant with its surroundings as “always on my mind” in the verse, they combine to create a little mental dissonance for you as you repeat them back and forth.

Those aspects are so monolithic that I often forget the little touches of this song. Have you forgotten the hopelessly optimistic major-key bridge, so reminiscent of sunny 60s pop with its chiming synth bell rings, only to be deflated by the subsequent talk-rap? What about the later refrain of atonal jazz piano?

Then there is the control of it. While the lyrics are lightweight and almost a little silly, the delivery is anything but. This isn’t a young woman begging for attention. She’s demanding it.

Altogether, “What Have You Done For Me Lately” is a blueprint hat’s still followed today for a child star’s perfect pivot from a squeaky-clean, bubble-gum pop image into audaciousness supported by a hip, current sound. Compare Janet Jackson’s breakout here to subsequent moves by Christian Aguilera, or even Miley Cyrus and Ariana Grande – all bigger voices but each with the same problem as Janet.

A lot of other stars might have copied Jackson’s strategy, but none of them have come close to topping this as their breakout single.”