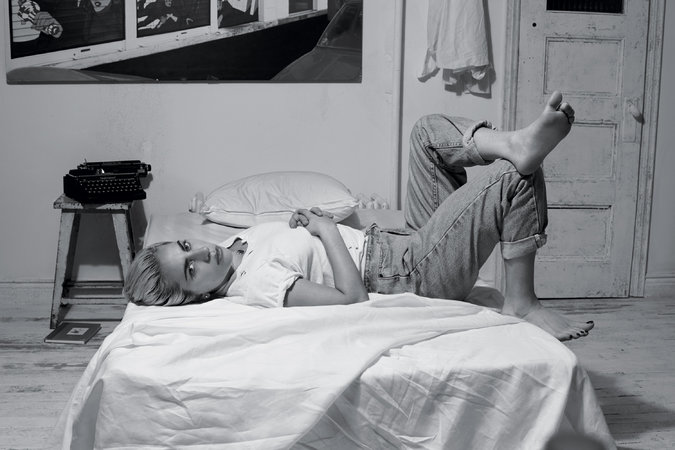 Lady Gaga continues her trip back through time with “Dancin’ In Circles,” a song that sounds ripped from The Fame Monster in more ways than one.

As soon as the song begins we hear a familiar sound – what we now know to be Gaga’s fake, swollen-tongued, pop voice, in which she talk-sings, “let’s funk downtown.”

That tiny voice was all over her first two efforts, as on the title hook from “Beautiful, Dirty, Rich” – usually contrasted against full-throated belting (also present here). Yet, it was banished as of Born This Way. It returns here, as if to say, “Do you remember when I was the newbie weirdo in your headphones? I do.”

Maybe it’s just a sign of my age, but any sort of reggae-by-way-of-pop tune like that always seems to be influenced by Ace of Base. Of course, this wouldn’t be the first time Lady Gaga has referenced the early-90s Swedish hitmakers. “Alejandro” on Fame Monster was an obvious sound-alike to their “Don’t Turn Around,” and “Dancin’ In Circles” could easily be Gaga’s version of “All That She Wants” (or the less well-known “Wheel of Fortune”).

If we weren’t already firmly in The Fame Monster zone within the first ten seconds of the song, the lyrics invoke yet another element. Gaga nearly quotes “So Happy I Could Die” with the lyric “[I] touch myself to pass the time” in the first verse.

I fool myself, swirl around as if I’m someone else. Your hands are mine
I do a trick , pretend that I am you until it clicks. I come alive, come alive

Are you with me on this? Between the lyrics and the pelvis-thrusting reggae rhythms of this song, the connection is undeniable.

The quick “baby don’t cry, baby don’t cry” refrain with its dressing of harmony is another memorable hook, which allows the “let’s funk downtown” refrain to stay quirky and memorable without the burden of acting as a chorus like the “discostick” chant from “Lovegame.”

Just as easily as Gaga let us believe she had made a country record with “A-YO,” “Joanne,” and “John Wayne,” the combination of “John Wayne” and “Dancin’ In Circles” quickly snaps Joanne back to dance-pop territory, making the title track seem like the sonic outlier. Not only that, but they virtually erase the memory of ArtPop by drawing a direct connection to Gaga’s vastly more-popular original trio of releases.

Like I said: she’s smart. It doesn’t hurt that every one of the songs so far has been great, despite my minor songwriter’s quibbles with “Diamond Heart” and “Joanne.” Can Gaga really deliver a full-length effort where every song is distinct and memorable the way she did on The Fame Monster EP?

I’ve got another week of Gaga in store for you to answer that question!