I’ve never understood how “Best of the Year” lists can come out in December. There’s a whole extra month of things that might be the best! There’s more year – more context – that hasn’t happened yet!

The lists should come out in January. I blame Christmas. Some might say I have declared a war on it.

I think “Best of Year” lists should come out in the following January, or maybe even March or April. Who can even know the shape of the year without a little time and hindsight? How many of these 35 songs would I have chosen right at the end their years rather than after? In many cases, I hadn’t even heard them year.

I don’t know what hindsight will tell me about 2016. It was tempting to pick “Blackstar” or “Lazarus” as a reminder of those brief first 10 days of 2016 when it seemed everything was possible before the sad, awful mess of this year set in. Maybe in hindsight one of those will be my song of 2016.

For now, my pick is a song from just two weeks later. Actually, it was the first thing I heard other than David Bowie after his death. The song is “Mountains” by Dirty Holiday, a moniker for one of the many projects of Philly singer-songwriter Katie Barbato.

It also happens to be EV’s favorite song of the year.

This will forever go down as the first song I discovered and loved at exactly the same time as EV. She was sitting at our dining room table the first time I played it from my laptop, and as she requested Dirty Holiday’s Nobody’s Sober EP again and again it grew to be our favorite song amongst a strong crop.

There’s something about how the song picks up from a bluesy, acoustic strum to something larger .The arrangement and production is a perfect fit for this tune. In particular, I’d describe those organ parts as “lurid” – so swirling and colorful that there is almost something prickly and sinister about them, lending a different meaning to Barbato’s tossed off “da dut da” above them.

One Wednesday over the summer I brought EV to the Academy of Natural Sciences to see the dinosaurs for the first time. However, in documenting the story on the blog this summer, I skipped my favorite part.

EV and I reached the intersection of 19th street and Walnut, where 19th is interrupted by Rittenhouse Square. As we crossed from the west side to the east, we very literally bumped into Katie Barbato and her husband Matt. We hugged hello, and then I leaned down to introduce EV.

“EV, this is Miss Katie.” Then, it dawned on me that EV knew exactly who Miss Katie was. “EV, it’s Katie Barbato.”

Here is an artist’s rendering of EV’s face in that moment: 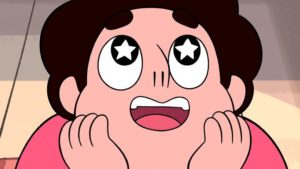 Katie, Matt, and I chatted about Katie’s record and my purple hair for a few minutes while EV hid behind my legs in awe. There we were in the middle of Center City, and her papa was talking to A ROCK STAR FROM THE IPOD. She did not say a single word to Katie or Matt, but as soon as we said our goodbyes the only thing she could talk about for the rest of the day was, “Did you know that I met Katie Barbato?”

Requests for “Mountains” saw an uptick after that, which I didn’t even think was possible.

You can buy the entire Nobody’s Sober EP at BandCamp for $4. It is five songs long and each song is way better than a dollar, so that is a steal.