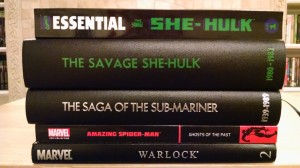 Top to bottom: Marvel’s B&W Essential She-Hulk Collection, my bind of the same issues, my Sub-Mariner bind, a color Spider-Man Epic collection of about the same length as my bind, and a color Marvel Masterworks collection of about half the length without its dust jacket.

Just a quick one today to share a project I completed earlier this year.

Even with my primary focus being on graphic novel collections of individual comic books, I have a ton of single “floppy” comics boxed up in my house. Some of them are from my original 1990s collection, which I’ve bought others to fill gaps between official collected editions. The rub is I am completely disinterested in reading single comic book. So much picking up and putting down, plus those annoying bags and boards to keep them safe. I love a book I can bring with me to bed or on my commute.

As a result, I took a spare low-grade run of The Savage She-Hulk plus some cheap Saga of The Sub-Mariner recap comics and sent them off to be custom bound per my exact specifications. Some people carefully clip out unnecessary pages and back covers, but I wanted to begin by just getting some whole comics bound.

Here are the results – the only difference between the two books is that the She-Hulk bind is oversewn (stitches pass through all pages a short distance in from the spine) and Sub-Mariner is sewn through the fold (each comic is effectively one signature of the book, with stitches through the fold of the book).

What I loved about learning about book-binding was that it wasn’t just about comic books. I didn’t get to work on anything with a hardcover in my years of print production, and this really opened my eyes to the types of binding methods used in the books we encounter every day. 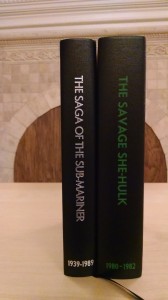 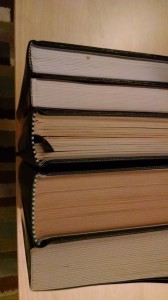 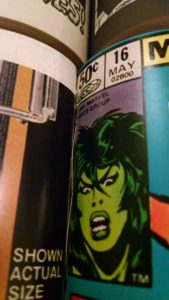 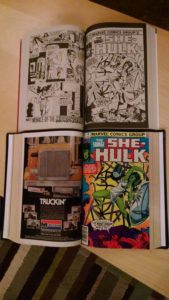 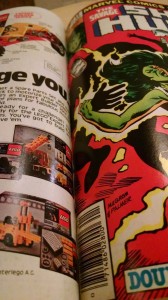 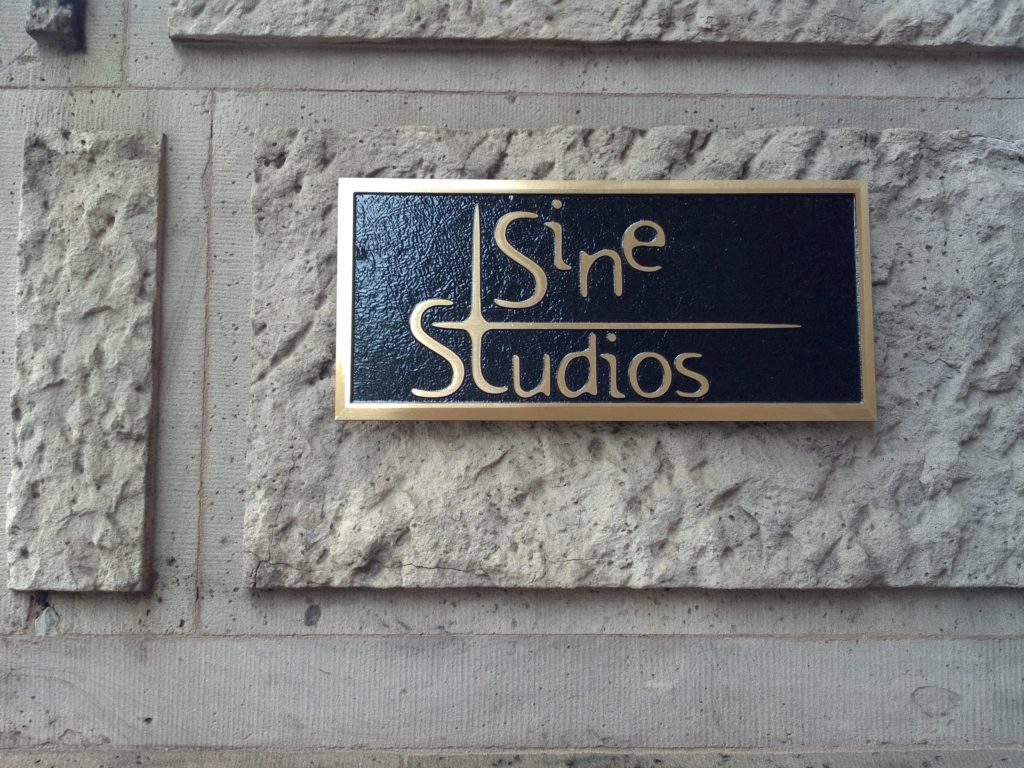 On a top-secret mission to Sine Studios at 127 S. 22nd Street in Philadelphia, just above Walnut.

I can’t get into the details of our journey just yet, but given the context of today it made me think about what independence and DIY really means to me – and to you.

For a long time I was DIY because I had to be – because no one else wanted to help me make music or publish my writing or code my website. I didn’t have the money or the clout to attract anyone to my projects, so I did them all myself.

I’m sure you’ve found yourself in the same place. Nobody would do it for you, so you did it for yourself!

That do-it-yourself know-how is a wonderful thing to have. I love that I’ve never been to a recording studio and that I’ve coded all my own websites from scratch or with open source. I love being capable and autonomous.

But being independent doesn’t mean you can’t ask for help.

This weekend in my JavaScript coding I got super-stuck more than once. Luckily, I am married to a self-taught JavaScript expert. I was happy to have her help. Last summer E laid down a set of beautiful new slate steps in our back yard, but mixing a new cement panel for our front walk was beyond her. We hired a local contractor, and they took care if it in a matter of hours a few weeks ago.

E and I never stopped being independent and capable. We still did our research and learned new things from the process. We just called in the experts when the time was right.

I have been working on recording projects for both Arcati Crisis and Filmstar over the past year. Recording a full rock band is a tall task. It’s not just about putting up a ton of microphones and rolling tape. You have to deal with noise, separation, splitting signals, phase issues, and tons of other aspects.

I can handle that myself as a recording engineer, but that takes a lot out of me as a performer. Add to that a fiercely played full drum set, and the hamster in my brain will run itself right off of his wheel.

That’s what lead to our top secret trip to Sine. I was asking for help from experts that I trust.

It doesn’t mean we’re not independent. It doesn’t mean I couldn’t do it myself if I wanted to. It just means that now I know when it’s time to reach out to someone I trust instead of suffering through difficulties on my own.

That’s what independence means to me today.

What does independence mean to you?

Every time we have an Arcati Crisis show I want to make it special.

I can’t help myself. When you play in the same city to largely the same crowd over and over again you have to keep it interesting. Spice things up a little.

Well, tomorrow night at the Tin Angel (7:30p, $10, you should come) is going to be spicy enough – it’s our first show with both Zina on drums and Jake on bass. It’s also my birthday show. It’s also our nearly annual Fall Extravaganza.

I decided that wasn’t enough special for one show, so it’s also going to be a CD release party… 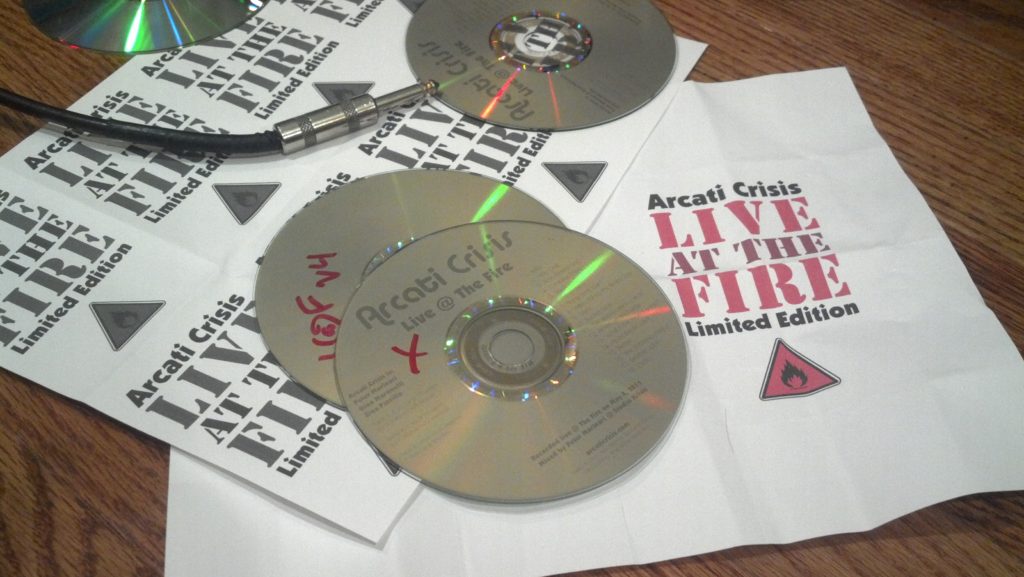 Thanks to brand new mixing software and a few quick car trips and a week off from work, Arcati Crisis is ready to release our fifth totally DIY album at tomorrow night’s show – and it sounds really, really, really good. I’m in a bit of disbelief that we played it or that I mixed it. It’s a 10-song, 18-track LP of one of our first shows with Zina on drums at Philly venue The Fire, and it’s only available as a fan appreciation reward from the band.

What that means exactly I’m not sure. I’m going to figure it out while I’m asleep.

Of course, even with a week off I’m going to be up until the wee hours of the morning before a show burning these suckers, but that’s the price I pay for instant gratification.

I am radically Do-It-Yourself when it comes to music.

Since Gina is also a dedicated DIYer we always go that route with Arcati Crisis with no questions asked. We record ourselves, design our own graphics and websites, rehearse at home, and are now working on creating our own merchandise.

Filmstar is different. They DIY some things, but not others. They’ve been to a recording studio, used a rehearsal space, hired a photographer, and are even discussing working with a manager.

I try not to unduly influence the band with my mutinous DIY ways, but when it came to dropping big dollars on studio recording when we had never been through the process before I couldn’t keep my mouth shut. The result was last month’s drum engineering session in our dining room, which I spent a big chunk of yesterday mixing down. END_OF_DOCUMENT_TOKEN_TO_BE_REPLACED 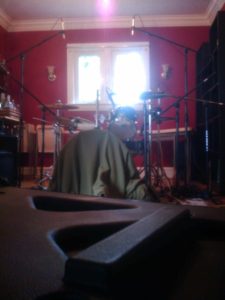 As if the Philly Geek Awards weren’t enough excitement for one weekend, I woke up on Saturday morning to face the daunting task of setting up our dining room as a drumming room for recording Filmstar.

After shopping around to some fantastic local studios last fall we realized we weren’t quite ready to drop major cash on pro recording for our first EP. To make studio time worthwhile you need to be playing solid takes of songs, know what you want them to sound like, and understand what you want to add.

Our first pass at that preparation was the Live @ Rehearsal style recording sessions for The Desperate Times EP last winter. For that session we recorded the band live with scratch vocals, going back to recut lead and backing vocals (plus acoustic guitar) on top of our full band takes.

I outdid my prior bests in mixing the EP, but I was flummoxed by the limitations of our recording process. Particularly, it was impossible to stitch together the best parts of multiple takes because we hadn’t recorded to a click track.

Thus, the mission for our new double A-side single: record perfectly in-tempo, click-tracked drums, as many times as we could withstand. END_OF_DOCUMENT_TOKEN_TO_BE_REPLACED