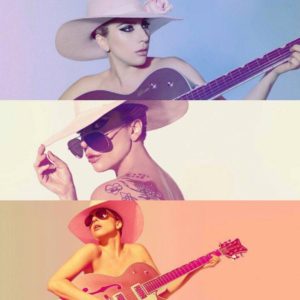 Lady Gaga’s title cards from tonight’s episode of SNL, where she is the musical guest.

Hearing “John Wayne” tracked after “A-YO” and “Joanne” made me appreciate just how canny Lady Gaga is.

A song title like “John Wayne” seems to clearly confirm the country bent of this album. Doubtlessly, some pop fans will be in a panic after the acoustic “Joanne” and another country-tinged tune could cause them to tune out.

What does Gaga do after the shock to reel us back in? Delivers a track named “John Wayne” with a decidedly country-fried guitar lick that’s more in line with her typical minor-key dance-stomp, so much that it feels ripped right from the back half of Born This Way.

Yes, Born This Way. Listen to Gaga’s vocal tone and intonation here. There are still shades of her country drawl from “A-YO,” but it also has the cooed alto notes of Born. Add the bass groove with minor synth work exploding into a big hook feels like it could be tracked right next to “Highway Unicorn (Road To Love).”

The stomp of the drums during that big hook make even more sense when you know that “John Wayne” is one of two cowrites with Josh Homme, of Queens of the Stone Age and Eagles of Death Metal (the other is “Diamond Heart”). Homme’s guitar work – muscular and sour – is usually his sonic signature (heard clearly on the chorus hook and outro solo), but many listeners don’t know he also plays drums. He’s the one behind the sticks here for the massive wallop of chorus drums with emphasized upbeats, which is another QotSA trademark. 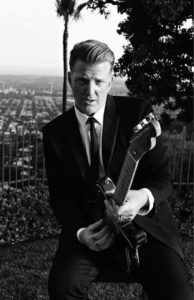 It’s hard to dissect Homme’s guitars from Gaga’s own wordless chants in the hook of this song, and I suspect they’re each doubling the other. Combined, they’re a sort of slow-mo version of a down-home fiddle riff, as you might be dancing along to in “Cotten-Eyed Joe” at half speed. Gaga can never attack a genre head on, so just as “A-YO” turned radio pop into a line-dance, here she perverts a line-dance into a modern rock song with Homme’s assistance.

On both “Diamond Heart” and “John Wayne” Gaga casts herself in the role of selling her body, there dancing for money and here proclaiming “Every John is just the same” (“John” is the noun that many sex workers use to describe a customer, basically a spin on “John Doe.”). While ArtPop was shameless sexual across its full length, for me the more specific callback is to Born This Way tracks like “Government Hooker,” “Judas,” and “Scheibe.” There, Gaga was toying specifically with the Mary Magdalene aspect of the “virgin/whore” dichotomy, versus the more generally sex positive ArtPop.

Yet, Gaga isn’t offering subservience here – she’s wishing for a better quality of man. “Every John is just the same,” she begins, “I’m sick of their city games. I crave a real wild man. I’m strung out on John Wayne!” Of course, Wayne is noted as a paragon of American masculinity. Yet, is Gaga talking about the literal, historical man here? Or, is John Wayne simply her nickname for any country man with rough hands who can take her on a “three-day bender”?

The answer doesn’t matter – it’s the question that defines this record. If ArtPop was a celebration of all things artificial that are crafted to be obsessed over, Joanne is about appreciating things that are authentic and tangible – anything that isn’t a “Perfect Illusion.”

More on that on Monday. Before then, we have another throwback track to discuss tomorrow.