A lot of parenting is storytelling about your own life.

Kids are endlessly curious about who you are and how you got to be that way. Or, at least, my kid is.

She also sometimes needs to be reminded that the seemingly all-knowing parental units she trusts to answer her questions and organize her life didn’t emerge from the sea on a clam shell, fully-formed. 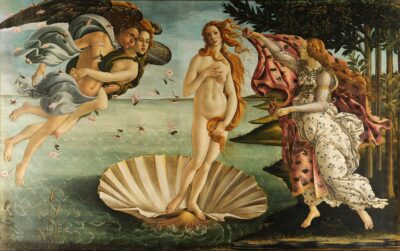 Recently, this has resulted in a lot of storytelling about how I got to be the me shows knows. A lot of that relied on me doing the thing.

“Doing the thing” is how I think about anything that I self-started without a nudge from adults or mentors in my own life. It’s personal entrepreneurship. Pure hustle. Unfiltered desire.

That’s how I got started performing on stage. No one encouraged me to audition for my first play. No one coached me on my monologue for my first audition. I wanted that for myself so just did the thing.

That’s how I became a musician. I begged for months for a guitar, which resulted in my receiving the cheapest, barely-tunable acoustic guitar that could be had. I had a few initial lessons. Then I did the thing. I taught myself “Ziggy Stardust.” I wrote my own songs. I put on concerts to an audience of no one in my living room.

That’s how I started this blog! No one ever asked me to do it or taught me how. I signed up for Blogger.com one day in August of 2000 and did the thing. I learned PHP because I didn’t like how Blogger organized its archives.

I could go on self-mythologizing, but CK picks things up from there. I got my minor in music, became an a cappella arranger and singer, a band leader, a comic guide curator, and made the jump to working in tech, among many other things no one else ever encouraged me to do.

I don’t deny that I relied on privilege to get into some of those situations, or that I had the support of peers once I starting doing the things. I had a stable enough home life that I could focus on wanting to be a performer. Family members bought me that first guitar and the computer I launched this blog with. Gina was there at that first theatre audition. Sara taught me to read sheet music over the phone the summer of 1998.

Eventually “doing the thing” became about jump-starting new things with friends, like organizing Lyndzapalooza with Lindsay and starting a cover band with Ashley. E and I moving to New Zealand was yet another example of doing the thing.

As I’ve recounted some of these things to the kid, I’ve been amazed by my past self. I would leap blindly into a new endeavor with the full belief that I could figure it out if I tried hard enough.

Having that unflinching self-belief is a privilege.

But doing the thing – sticking with all these things for all these years – is all my own.

I took a breather from my reshelving to record a special out-of-continuity episode of Crushing Comics, wherein I do not unwrap any new books but do express my gratitude for your support as I’ve posted 30 videos in the last 30 days.

For over a decade now I have a habit of making November a very challenging month for myself by setting a lofty goal around producing new content. I’ve recorded 30 songs in 30 days, blogged daily, written the first draft of a novel, and turned CK into a pro-level music and comics blog for a month.

In all of those cases I was challenging myself to do more of something I already really loved – writing or playing music. The hard part was finding the time and inspiration to do it with great consistency.

This year was different. In addition to blogging daily, I challenged myself to do something I am extremely uncomfortable doing – shooting and editing video. This discomfort stretches all the way back to college, where a Film & Video 101 class was the first one I ever dropped.

(Yes, I just searched my own archives for corroboration of that memory. And found it. Because this blog is ancient).

Sixteen years later and I’m still averse to video. There are so many variables to control – all of the potential pitfalls of audio recording, plus a whole new visual layer in which I can make mistakes. My past video efforts have been defeated by everything from bad lighting to out-of-sync audio, and the concept of adding graphics and chyrons was just beyond me. It’s something I’ve only ever done begrudgingly and with great difficulty.

This year changed that. My Crushing Comics episodes certainly aren’t masterpieces of short film, but in recording and editing them I surmounted every one of my prior video challenges and actually learned new stuff along the way. I replaced my own head with an animated version twice!

Here’s the thing: I had no idea at the beginning of the month this was going to turn into a daily endeavor. I had an initial week of videos prepped because I always like to launch a new content project with consistency, but after day eight I had no expectation of keeping up that pace. The initial video editing was taking four hours an episode.

Going 30 for 30 happened because of you. It happened because the view counts kept going up, because you left delightful comments, and because you contributed to my Patreon campaign along the way. I had no idea that daily videos were going to be my monthly challenge, but you kinda forced my hand.

Beyond finally learning some skills behind the camera, I also got the chance to be in front of it for over five hours worth of hosting. That’s more time on camera than most TV shows broadcast in November! For me, it was a chance to get back to being a live presenter after over a year away from fronting a band and almost two years away from emceeing events. That’s a part of myself I never intended to step away from when the stay-at-home parent part of my life began, but circumstances conspired to have it take a back seat. I’m so happy to have it back

All of that is why I felt moved to make a thank you video today. Despite my long history of aggressive personal goal-setting, some achievements require external motivation (even if that’s just eyeballs other than my own to consume them). I did the work, but you made it possible.

The one downside of these many high-effort Novembers is that I very rarely keep up the momentum after the month has ended. Usually I’m too worn out, plus whatever lofty goal I set for 30 days is something unattainable in the long haul.

This year is different – I not only used the month to shoot 30 videos, but to plan ahead for more. Unwrapping will continue on Monday, with new episodes every weekday – I already have the next two weeks in the can! Plus, I’m already brewing plans for Season 2, because eventually all of these books will be unwrapped.

That’s a whole lot of words to say “thank you,” but here are two minutes more. Eagle-eyed viewers may be able to spot some near-future unwrappings in the background!