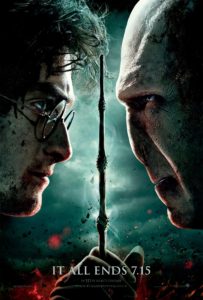 This weekend E, Amanda Nan, and I held our penultimate PotterThon – a 24hr sequential viewing of all of the Harry Potter DVDs that includes reverential silence, spirited debate, Mystery Science Theatre-style heckling,  and reading passages out of the books to prove each other wrong. We followed it up with a trip to the theatre to see Harry Potter & The Deathly Hallows, Part 2.

(The final PotterThon will be held around Christmas when the full set emerges on Blu-Ray, and will feature considerably more champagne than one typically finds in a movie theatre.)

We all thought Harry Potter 7.2 was an immensely satisfying conclusion to the film series. It hit all of the major moments from the book, sometimes enhancing them from Rowling’s rushed read on events in the back half of Deathly Hallows. Even if it lacked a bit of heart and turned a certain pair of good guys into terrorist murderers, I still think it’s about as pitch-perfect as possible.

That’s not true for the other seven movies, as we love to hash out during the rest of PotterThon. Each of them manages to leave out a few key moments from the books.

I’m not talking about things that are best left on the cutting room floor, either for content or just not making sense on screen. Viewers were better off without SPEW, a centaur professor, Dumbledore’s unabridged life story, a Death Eater with a baby head, Voldemort’s (in)breeding, and Nearly Headless Nick’s death day. No, these are the sorts of things that actually could have improved the movies.

Here’s what we came up with… END_OF_DOCUMENT_TOKEN_TO_BE_REPLACED