“Vogue” was part of a trend – maybe its apex – of bringing elements of popular club music to the mainstream (in this case, House music). The popularity lasted only a brief period and had few popular antecedents before going underground again thanks to the radio takeover by alternative rock in the following years. You could hear it again on Cathy Dennis’s “C’Mon Move This,” Ce Ce Peniston’s “Finally,” and all over the next albums by Paula Abdul and Prince.

While those tracks are all glossy, radio-ready examples, a lot of the significant songs of the period weren’t so polished. Some of those fell into the sub-genre of “hip house,” a subgenre born in Chicago which fused hip hop break beats and bassline samples with house elements. One of the bigger crossover hits was “Pump Up The Jam,” by Technotronic – who I saw open Madonna’s Blonde Ambition tour in 1990! 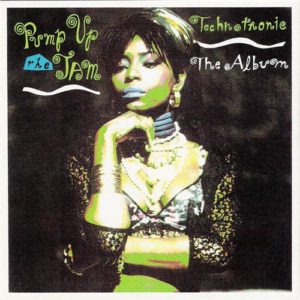 “Pump Up The Jam” is really stripped down. Its drum machine sounds cheap and is almost all snares and hi-hat rides. It eschews the clanging piano of House completely and inserts only the most passing of synths to dress up its bass loops. The vocals from Ya Kid K are half spoken and half sung, tinged by the inflection of a hip hop MC (though she does not appear in the video – the singer there is model Felly Kilingi, who also graced the cover of the LP).

I played the hell out of this song on tape in 1990 and I cannot explain why. I liked all of those House singles I listed above, but I wasn’t remotely into hip hop or anything with the bracing starkness of this song. But, as Mother of Krisis would say, “Does it have a good beat? Can you dance to it?” Both answers were yes.

Thus, at sundown I would drag my boombox out to the edge of my grandmother’s postage-stamp urban front lawn, pull on my denim jacket, turn this song up to 10, and execute my choreography in the middle of the street for all to see.

(Seriously, was there any doubt that I was going to be on stage later in life? What the hell was everyone in my family waiting for.)