Since arriving in New Zealand I have an ongoing anxiety about being an obnoxious American.

I’m constantly apologizing to native Kiwis – for my diction, for having so many questions, for not knowing how to tell apart their money, and for using idioms like “pull the trigger.”

In fact, I think I’ve only done two actually obnoxious things since I’ve been here, and one is driving too cautiously into roundabouts. 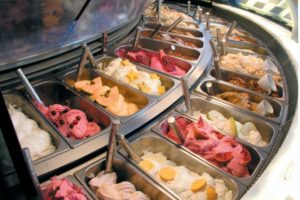 A typical day’s selection of fruit sorbettos at Capogiro.

The other is talking smack on New Zealand’s ice cream. Every time I do it I get a note from a new Kiwi friend on Twitter that very gently expresses their indignation.

Here’s the skinny (or, as the case may be, not so skinny): Ice cream is my favorite thing to consume on this planet. I can (and have) eat ice cream four meals in a day, starting with it topping my warm oat meal and enjoying it between courses at dinner.

Thus, I was pretty excited to try a whole new country’s worth of ice cream in New Zealand, about which I’ve heard some excellent things.

What I forgot about in all my excitement about new ice cream is that Philadelphia is an amazing place to live if you are obsessed with ice cream. It’s a sort of ice cream mecca! We could purposefully ignore four or five of the best icy treats in the city and the next one on the list would still be better than the ice cream in most other cities on the planet. 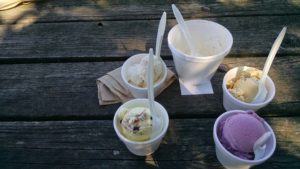 My first flight of birthday flavors at Merrymead Farm.

After that, there is my years-long addiction to Franklin Fountain‘s absurdly good hand-dipped ice cream served from in an old-timey soda fountain shop. Then Bassett’s Ice Cream, America’s oldest ice cream company, with their iconic Reading Terminal counter.

Plus, the fantastical small-batch flavors (and absurd marketing) of Little Baby’s Ice Cream! And the massive selection of local creameries, including Montgomery County’s Merrymead Farm, where I ate 22 flavors for my birthday last year!

That’s not even getting into Pop’s Water Ice or the now-ubiquitous Rita’s, which I am physically incapable of turning down. And we haven’t even been to a grocery story yet, where national brands like Edie’s and upstart Blue Bunny are shelved alongside Pennsylvania’s own Hersey’s or Turkey Hill, and upstart Halo Top is competing with my beloved Ben & Jerry’s. 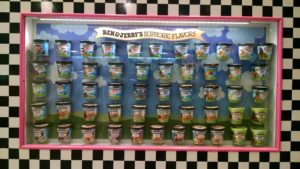 The flavor wall at Ben & Jerry’s this August.

Suffice to say, I was completely spoiled for ice cream choices in Philly, from the lowly generic carton to the high-end boutique brands.

That might explain why I’ve felt every sample I’ve had so far in New Zealand has been been a bust. Every flavor I’ve tried is too sweet. All of the vanillas have a sickly marshmallow note to their flavor that obscures the sweet bite of their bean. The salted caramels are too sugary to be salty.

(I have briefly considered that corn syrup just isn’t a thing here, and that my sweets-calibration might be totally off when it comes to things made only with natural sugar. That definitely applies to the cookies here (which is another post entirely), but given my wide-ranging taste in ice cream including a love for small creameries, and I’m pretty sure corn syrup and artificial sweeteners aren’t entering into the conversation here). 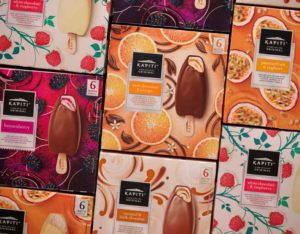 Each time this occurs and I whinge about it on Twitter, a kind Kiwi will bring up the same few “must try” ice cream brands that I am obviously missing out on, one of which is invariable Kapiti.

Here’s the thing: They are invariable $8 and up for less than a 2L container.

I came into New Zealand accepting that everything is more expensive here, but I refuse to accept that the only way to get good ice cream is to pay 2-3x what the cheapest brands in the store cost. That’s like telling an American to ignore every brand in their freeze aisle except for Ben & Jerry’s, Dove, and Häagen-Dazs.

Heck, you could never eat any of those brands and still eat ice cream fit for a king on a pauper’s budget. The store brand at GIANT was terrific. I’d never shell out more than $4 for a half gallon in the story unless I was buying a rare pint of Ben & Jerry’s, because some awesome brand would doubtlessly be on sale for 2-for-$7.

I’ve now sampled four or five different brands, and I’m ready to call it quits on my life-long affair with buying ice cream. If I can’t enjoy your ice cream at its cheapest blow-out price, I’m not interested in it when it costs a tenner.

As I described it to one new Kiwi friend, expensive ice cream occupies the same area of my brain as expensive jeans – something that only rich thin people ever buy.