Welcome to my review and power rankings of the fifth episode of Drag Race France Season 1 – Popstars, the Drag Race France girl group challenge accompanied by a “Night of 1000 Mylène Farmers” runway celebrating one of France’s biggest pop stars.

Often, the biggest challenges of a pop music theme on Drag Race aren’t for the queens but for production. It’s not easy to effectively parody pop music without seeming too silly, and harder still to fabricate a credible pop song on demand for a reality show. 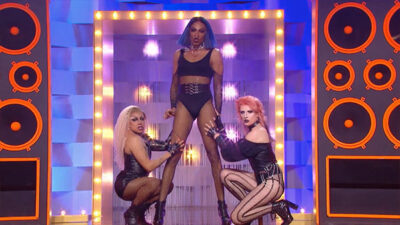 The American Drag Race franchise often absolves itself of this duty altogether by repurposing RuPaul songs for its many musical challenges. Ru produces a slew of charming dance music, but it doesn’t often line up with trends in pop.

I feel as though the success of “Break Up (Bye Bye)” for Drag Race UK in 2019 finally shook up this habit, showing that producing real, current pop music for the show could pay off in increased attention in other media. That worked in part because the UK has a voracious music market that celebrates TV pop stars more than America does, but it didn’t hurt that the song was damn good.

Since then, Drag Race has stepped up its musical game for its so-called “girl group” challenges – and, I’d say the two versions of “Boom Boom” on this episode are near the top of that staircase. This song songs exactly like the sort of high-tempo disco-influenced pop delivered by European girl groups (and even some K-pop).

Not only was the song good, but Drag Race France completely avoided the trope of having any artist singled out for her intense struggle as a newfound singer/songwriter and dancing queen. Even though Paloma did poorly in the challenge, at no point did the edit lean into a “I can’t sing at all” self-confidence spiral or a “I think I can sing, but I can’t” fit of delusion. While the queens had different levels of success in the challenge, none of them were an abject failure. The same is true for the “Night of 1000 Mylène Farmers” runway.

The strong performance from the queens this episode exposed that this season’s single weakness may be in its mercurial judging. We are now at the point of the season where all six of the queens are well-round professionals with an eye for detail. Yet, the judges are still finding minor – and often invisible – elements about them to critique. Nicky Doll seems to be giving the most practical and even-handed advice, but her companions Daphné Bürki and Kiddy Smile often seem to be critiquing a different competition entirely.

It can be hard to understand the nuance of Drag Race judging in a different language. Imagine trying to understand Michelle Visage’s pop culture references and promiscuity jokes in translation! Would we still understand that there is a layer of motherly warmth beneath her bitchy exterior if we were relying only on subtitles? 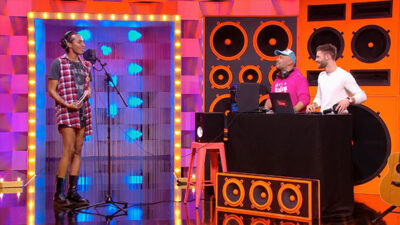 That’s the question I have about Daphné Bürki and Kiddy Smile. Daphné has given incisive critiques, but sometimes it feels as though she is expecting fashion modeling instead of drag. And, it is hard to tell if Kiddy Smile is naturally laconic or if he is holding back to make up for the extreme conflict of interest of La Grande Dame being his own drag daughter.

The inconsistent judging would be dragging this season down more if there wasn’t such a clear divide in the field of queens between the Top 3 and everyone else that has been evident since week one. Elips’ deep run into the competition might be the only true surprise of the season if things continue to play out as they have, which somewhat forgives the judges since the outcome will be the same regardless of what they say.

Now it’s time to rank the queens, dissect their performances, and discuss their runways! This results in a shuffle of the top three from last week’s Episode 4 power rankings, as well as a continued joust for 4th place.