There are DC heroes I’ve played with as toys, or seen in cartoons, or have some general inkling of the existence of.

Then there is Deadman. I’ve got nothing except for open contempt for writer Paul Jenkins, who seems to have the uncanny ability to let interesting plots lie just beyond the tip of his pen while he jots down page after snoozy page of circular interior monologues.

Even if he upholds his soporific reputation here on DC’s new superhero anthology title, at least we’ll only have to sit through it for a few months. 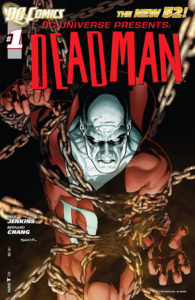 In a Line: “And so Johnny Foster becomes yet another living brick on my path to enlightenment.”

#140char Review: DCU Presents #1 features Deadman & way too much interminable chatter in the hands of Jenkins, who couldn’t find a plot w/a compass in hand.

DC Universe Presents #1 features Deadman in an issue that is totally dead on arrival.

There is recapping a character’s origin, and then there is over-explaining. There is using caption boxes to good effect, and then there is needing an editor to intervene. Welcome to the world of Paul Jenkins. He achieved the same soporific effect on this summer X-Men: Prelude to Schism mini-series.

Despite a witty introduction, this comic is one unending stretch of Jenkins’s dull version of Deadman’s internal monologue. Yet, after notching what is surely the highest word count of every new DC book so far, he doesn’t even manage to appropriately explain what Deadman’s power actually does. Sure, he can inhabit bodies and influence their actions, but is he in complete control? When he enters a body he’s assigned to can he leave willingly, or is he stuck like Scott Bakula on Quantum Leap? I’m not saying a first issue should try to explain everything – I’m just saying a first issue that does this much explaining should try to explain something the readers actually care about.

Instead, we get Deadman’s existential angst, worrying that haunting people isn’t as fun as it used to be, a four page chase scene to introduce a minor plot mcguffin, and a two page montage of previously inhabited bodies that just won’t end.

It’s a pity Jenkins writes this one into the ground, because Bernard Chang’s art is attractive. Or, it would be, if not for the overbearing, too-shiny colors. The colors make Chang’s pencils seem overly glossy, when they’re clearly pretty textured – at points evoking John Romita Jr. Only on Deadman’s otherworldly benefactor do the colors hit their mark.

Maybe Jenkins has a thrilling plot in mind for this opening arc of DCU Presents, but his recent track record points to a probable flatline. I don’t think I could stand to read through another overly-written issue.