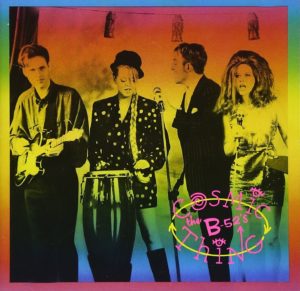 I was drawn to the B-52’s Cosmic Thing by the ubiquitous “Love Shack” and the magnificent “Roam,” the latter of which captured that Atlanta sound in a perfect female-lead analog to the increasingly popular R.E.M..

I didn’t like R.E.M. at the time, but I loved the B-52’s. They were whacky and whimsical. They wrote songs about aliens in the oval office and love shacks on the side of the road.

The thing I loved about them the most is that they were a real band – maybe the first rock band I really loved that wasn’t The Beatles. I was obsessed with reading liner notes at this stage in my life, constantly scanning the co-write credits and musicians.

Most of the artists I listened to were just singers, although by this point Madonna had wised up and garnered a co-write on every track of Like a Prayer.

The B-52’s were different. They wrote the songs and played the instruments. I pictured them in the studio, arguing over the sounds of their chiming guitars and high, sighing harmonies.

The leading edge of Gen-Xers were just graduating high school when Cosmic Thing was released, still several years away from the sorts of failures defined in Reality Bites. Yet, “Deadbeat Club” perfectly aligns to that misanthropic, listless future, constantly mocking the happenings “down in NormalTown.”

It’s a song full of atmosphere and images – dancing in torn sheets in the rain and heading down to the bar for their cheapest beer. None of these settings are pictured in the plain video for the song, but I can see them clearly to this day.

The B-52’s were also a band with caché. My family knew who they were and didn’t look down their noses at them the way they did my other 80s pop. I remember standing on the porch of my grandmother’s house, listening to my aunt and cousin talk about the B-52’s riotous earlier records.

“Ah, but it’s a shame about what happened with the guitarist,” one of them said.

“What happened?” I asked, wide-eyed. I hadn’t been aware that the guitarist in my liner notes wasn’t the original guitarist.

“Ricky Wilson, the blonde one’s brother. He was… you know. He died of AIDS.”

This was still early in the AIDS epidemic, but I knew what it was and the implication of the words. He was gay and he died. I filed that information away. Maybe it’s part of what lead to the blowout with my tiny, conservative Christian school a few years later, where in a debate about AIDS in biology class was told by the teacher it was a plague sent to punish the immoral.

I didn’t have a club to call my own when I first heard the song. My only friends were classmates of whom I was only close to one. Yet, as I think back on the clubs I joined and that formed around me in life, this could have been the theme song to many of them.

In my mind, this was what it was like to feel one with your friends – a group that would otherwise be outcasts. Sitting around, stalking through town, and looking over our noses at the norms.

If we were the deadbeats and reject, who’d want to be normal?