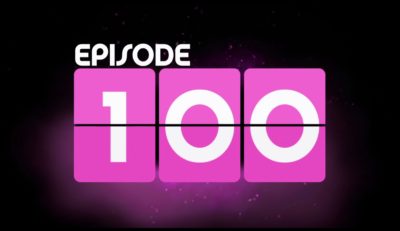 Twelve queens makes for a lot of men in wigs to wrangle, so rather than do a straight recap of this episode I’m going to describe the general structure, then break things down queen by queen through the judges comments, and finally handle the lip sync at the end.

The intro of the show counts up the most memorable moments from the first 99 episodes from the premiere of Season 1 right through Violet’s queening “Come Through!” at the end of Season 7. You certainly can’t accuse this show of not knowing its own viral moments.

After the 12 girls enter the room and introduce themselves. They aren’t too demographically unique from prior seasons with the exception that there is not a single big queen – Kim Chi is the curviest one, and she’s tiny!

Ru appears to the girls via a video that hits tons of the major catchphrases of the show, though no one quite catches on to the theme of guest stars from seasons past even when boy Ru comes into the room to say hello.

As for the past champions and their Mathu Anderson photo shoot? Bebe Zahara Benet is in high drag – a full-length purple gown, spectacular glittering make-up that draws attention to her eyes, and massive buns of silver costume jewelry and a big loop of hair atop her head. Tyra Sanchez is in basic Beyonce cosplay of black lace over a leather bikini with a ratty blonde wig, and at this point she really just ought to retroactively cede the crown to Raven. Raja is wearing some sort of Hannibal Lector as a Drag Queen in Space facial mask of jewelry that is perfectly weird over a sedate black ensemble. Sharon Needles is in a high-collared full-length velvet dress with big pairs of buttons, slightly masculine features, and bubble-gum pink bouffant. Chad Michaels is the vision of Cher in her 80s leather phase. Jinkx Monsoon is in peach old-film glamour with a stunning head of firey red-orange hair. Violet Chachki looks perhaps better than she ever did on the show as an all-pink Vegas showgirl with gray-lavender hair (I just had that look!)

Oh, and they brought a circus clown to stand in for Bianca! The ladies don’t do or say much during the shoot, although Sharon – ever the queen of comebacks – answers an “OMG” with, “Not really a god, but… close enough.” END_OF_DOCUMENT_TOKEN_TO_BE_REPLACED

Previously on RuPaul’s Drag Race, all of the queens returned but only Trixie stuck around, while long-time fashion victim Jaidynn Dior Fierce said goodbye with Tempest Du Jour lashed to her back.

The girls are disconnected from their departed twins and all wrung out. As Ginger approaches the mirror for the ceremonial wiping-away of the eliminee’s message, she owns up to how out-of-sorts she was for the twins challenge. “This was my wake-up call,” she interviews, “Ginger, you’re better than this, you need to make sure you pull it together.” She tears up a bit as a producer comforts her.

Trixie becomes the first queen in drag race herstory to be called back and then make it to the next episode! Trixie makes an attempt to laugh off the bad vibes from the other girls about someone coming back who skipped so many challenges, but the bad mojo is real from a few of them.

Katya interviews, “You can smell the resentment in the room as much as you can smell Violet’s BO.” END_OF_DOCUMENT_TOKEN_TO_BE_REPLACED

Alright, I’m wiped out beyond recognition right now (more on that tomorrow), but I promised reactions to the full episode of The Voice to accompany my Battle Round post.

The introductory recappery and previewing things that will happen in five minutes seemed crazily over-indulgent, but I guess if your new show is posting week-over-week ratings increases you have to catch up new fans. Your show is a commercial for your show.

There were voices, there were chairs, we had seasons in the sun. Et cetera. It’s very interesting that Emily Valentine got face time twice in the brief montage alongside top picks Jeff, Javier, and Kelsey. In a sneak peak at Team Christina’s room, Tarralyn gives great face – a crazy bitch face when X-Tina says “[only one singer] …survives.” It’s the first of many terrific faces she pulls this episode. END_OF_DOCUMENT_TOKEN_TO_BE_REPLACED 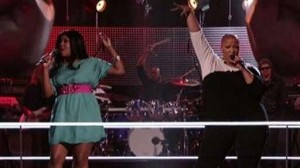 If they had pulled a big ballad Tarralyn might have eeked out a win, but on “Single Ladies” it was a blood-bath. END_OF_DOCUMENT_TOKEN_TO_BE_REPLACED