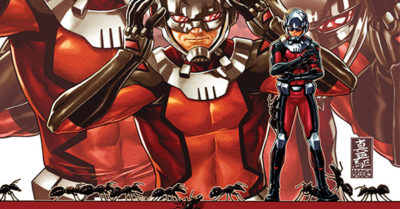 This is one of the handful of Marvel guides that have been stymieing me for months now. I think you’ll soon understand why.

The original Ant-Man was Hank Pym, who debuted in a late-Atlas-era monstrous one-shot story in Tales to Astonish just as Marvel’s Silver Age superhero universe was gaining traction.

He was quickly brought back as a superhero (rather than a mad scientist) to anchor anthology stories in that title as well as to found the Avengers, though he was immediately super-sized in Giant-Man while Wasp held on to the miniaturizing powers of the couple.

Hank Pym would go on to be one of the Marvel characters to hold the most different superhero names in the course of his career – Ant-Man, Giant-Man, Goliath, Yellowjacket – later he even took Janet’s name of The Wasp!

When Pym abandoned the Ant-Man name for good in the late 70s, Scott Lang took over. (There was a precedent for this – Pym’s lab assistant Bill Foster nabbed the Goliath name in 1975 when Pym and Hawkeye were through with it. He’s in the guide, too.) END_OF_DOCUMENT_TOKEN_TO_BE_REPLACED