I’m so happy to be getting my Crushing Comics guides back on track, and to kick that off I have a brief guide for a sentimental favorite to offer to all CK Patrons!
The Definitive Spider-Ham Guide 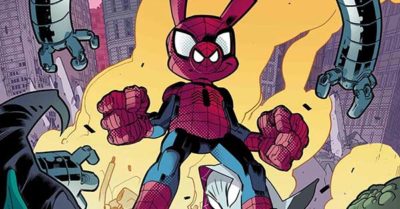 Long before I was a regular comic reader, I had a meager stack of comics from newsstands and spinner racks that sat on a slim bookshelf in my closet.

One was an old Conan comic from my father. Another was a random issue of Captain America. 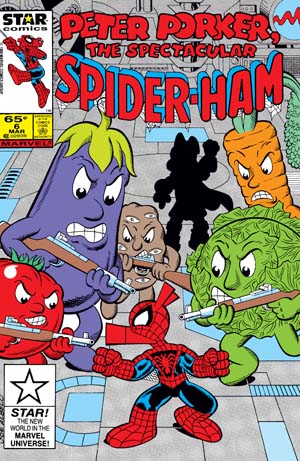 Possibly my first ever comic book?

I don’t know why I had it. I think people in my family assumed I would really love Spider-Man because I shared his name, but at the time (and, to this day) I was much more interested in Wonder Woman.

That one issue (which I still have!) meant I’ve always had a soft, nostalgic spot for Peter Porker. I never expected he would appear in a comic again other than as a one-off joke about the silly excesses of the 80s… until Spider-Verse.

Spider-Verse brought almost every iteration of every spider-character ever back into play for a brief, somewhat-bloody event, which included this Spider-turned-Super-Pig from Earth-8311.

Spider-Ham survived the carnage (not THE Carnage – lower-case carnage) of the event, befriended Spider-Gwen, Spider-Gwen become a hit, and the event inspired one of the most successful and awarded animated movies of all time.

The rest is (recent) history!

This might lead you to wonder: are there many Spider-Ham comic books to read? Are they anything like the zany version of the character who was cartoony even for a cartoon in Into The Spider-Verse.