Static Shock is the week one hero I know the least about. He’s young, his suit lets him manipulate energy, and he’s recently transplanted to New York.

That’s all I’ve got.

What makes it interesting is that it’s one of DC’s relaunched titles with an artist listed as a co-writer. That always intrigues me, as it doesn’t happen so often in my familiar home of X-titles. Does it mean a true writer/artist needed a minor assist on script-polishing? Or, that an artist with a solid connection to the character did more chiming in than usual in their collaboration with a writer?

More to the point: what does it say about quality. The one single-creator book this week was a knockout, but the other writer/artist collab was drab. Which side of the spectrum will this one fall on? 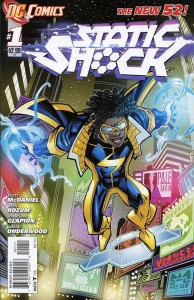 In a Line: “Not to sound all Keanu, but ‘whoah.’ This is definitely the coolest thing I’ve seen all day.”

140char Review: Static Shock #1 was the only DC reboot that felt like a comic for kids, with a Spider-Man-esque teen hero, explosions, and evil bad guys. Ok

Static Shock seems to be DC’s nearest analog to Spider-Man, thanks to his by-day geekery, teenage gumption, self-narration, and relocation to the actual city of New York instead of one of DC’s imaginary amalgamated places.

Does it work? Hero Virgil is charming enough. He comes off as much older in costume than out, and his quips aren’t Peter Parker witty. More interesting is that his in-costume confidence isn’t entirely founded. Unlike Spider-Man, who tends to luck into solutions, Static Shock is so sure of the science behind his powers that he doesn’t consider that he’ll decommission a bridge full of cars by using them. He’s a cocksure teenager who is clearly still a rookie, and there’s a lot of story to be played out there.

It seems like writers McDaniel and Rozum put a lot of thought into the mechanics of how his electrical powers work, but watching our hero explain them in detail as he chases down passive bubble of plasma isn’t the biggest thrill ride. However, that’s just half the issue, as a team of mysterious Power Ranger esque mercenaries are now on Static Shock’s tail. The pairing seems like it will yield interesting fodder; how will Virgil (who fled the scene of his co-worker being shot) deal with merciless killers? If the writers follow through on the shocking final panel we’re going to find out pretty soon!

As an artist McDaniel is strong on action, but his normal people look awkward. He mostly relies on a straight-lined approach that eschews curves on limbs and faces. It makes for solid costumed panels, but the visit to our hero at home looks like a mediocre Sunday comic strip. (And, what’s with the random appearance of a non-speaking Joker in the background of a scene with the villains? Intentional, or a coloring error?)

The element that distinguishes Static Shock is that it’s completely kid-appropriate. From the quick-moving action to the relatable hero, this is the first week one offering I’d hand over to a younger reader interested in comics.