(This post will be utterly spoiler free up until I give you a bold warning, below!) 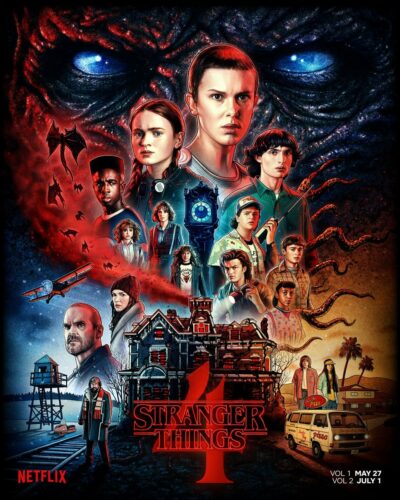 I didn’t meant to do it, but somehow I managed to binge all nine hours of Stranger Things Season Four within a single 24-hour period this weekend. Honestly, I just couldn’t turn it off, even if it meant almost completely sacrificing a day of sleep.

For a moment early in the season it seems like Season Four shared the same weakness as the past two seasons: The Duffers are convinced their breakout stars need their own storylines, which often feel like entirely separate shows within the show.

For a few episodes, it does feel like this story has become too big, too discursive. The core quartet of boys are fractured across multiple plots, and there are even more plotlines that don’t include them or Eleven.

Even as the plot feels bigger than ever before, Season 4 finally acknowledges that the show has never been about singular stars. It’s not a show about Eleven, Hopper, or even Hawkins. It’s about how your circle of friends grows and changes as you change how you define yourself. It’s about how things that used to be scary are now commonplace, and how the newest hurdle in your life always feels the highest.

Stranger Things could’ve become a horror anthology series returning to Hawkins again and again without our core cast of misfits. However, this time it really feels like a story about the misfits (like S1 did) as much as it is about the horror around them… and what caused it. The show’s ever-growing ensemble of actors makes it work the best it has since Season 1 (which I crushed on back in 2016).

Be warned: Stranger Things Season 4 is bloodier and scarier than any of the past volumes. There are fewer jump scares, but more outright gore and onscreen violence.

Also, the first few minutes of the first episode focus on the aftermath of graphic violence that might be triggering for some viewers – this week, especially. It received a special content warning in the states, but we didn’t get it here in New Zealand. If you’re sensitive to images of violence against children, you can safely skip from the big “knockout” blackout at the 7-minute mark to the end of the opening credits. You’ll see the same scene again in a less disturbing fashion later in the season.

(Continue reading if you want very minor spoilers about the characters and their arcs as of the beginning of the season.) END_OF_DOCUMENT_TOKEN_TO_BE_REPLACED

As with the release of any of Netflix’s “bing it all at once” television seasons, this weekend my social feed went from a stray mention of Stranger Things on Friday to a steady stream on Saturday as more and more people began to sample the eight-episode thriller.

I didn’t want to be a late adopter this time around (or: be spoiled!), so I jumped onto the bandwagon on Saturday night – and wound up finishing the entire show within 48hrs!

That’s not just because I love to binge on TV. In many ways, Stranger Things is Neflix’s most cohesive and successful original work yet. While the performances might not be of the raw caliber of acting as those in House of Cards or Orange Is The New Black, they all work perfecting in the unflinching service of this period 1980s thriller.

There are very light, “this is the concept, these are the characters, this happens in the beginning of Ep1” spoilers in the first section; a more spoiler-filled take for those who’ve already seen the show follows, below.

Stranger Things is a Netflix original that’s obsessed with the 80s work of Steven Spielberg, Stephen King, and Amblin Entertainment. It’s about a hidden horror, a terrifying secret, and how a group of kids bear the burden of both on the behalf of an entire sleepy town.

While Stranger Things is reverent of those influences, the show rarely feels derivative as it unfurls a sci-fi plot that is as human as it is creepy. The focus is always on the characters and rarely on the fantasy, even though the fantastical element are a seamlessly-executed success.

The opening frames introduce us to Hawkins, Indiana in November of 1983. We briefly glimpse a terrified scientist fleeing through the abandoned, flickering halls of a research facility on the outskirts of town before he is captured by an unseen creature.

The rest of Hawkins seems none the wiser to these events – it could not be more average. The geeky kids play Dungeons & Dragons and are obsessed with Star Wars. The teens are shot-gunning beers and talking about sex without consequence. The parents are stringing together jobs and cooking dinner without worrying too much about where their kids are hanging out and with whom. A surly sheriff hasn’t had to deal with any major crime – the last notable one was in the 20s!

Anything past idle teenage vandalism would be notable in this tiny ville. Yet, it’s also idyllic enough that a missing child can be chalked up to a wrong turn on a hike or deciding to take a Greyhound for an adventure to the city. That disappearance is accompanied by the appearance of a seemingly-mute young girl with a shaved head. She’s desperate to escape an anonymous group of men and women in black who want to haul her back to that same mysterious lab. When she encounters a trio of nerdy kids searching for their missing friend, it acts as a flashpoint that begins to unveil the horror that’s been unleashed on the small town. END_OF_DOCUMENT_TOKEN_TO_BE_REPLACED