This is the pilot for the fourth video series on my YouTube channel – Indie Series Spotlight!

After months of opening my massive collection of Marvel oversized hardcovers, I realized I was really missing talking about my love of comics not released by Marvel. Since returning to comic reading in 2012, I’ve become a massive fan of independent and creator-owned comics – they occupy a full third of my comic reading time, and they dominated my list of favorite comics in 2017.

In this new show, I’ll be sharing my indie comics love with you one series at a time. Each series will be something I strongly recommend to new readers – including folks who have never read a comic before in their lives! For each series, I’ll start by giving a general pitch of the title and then get into spoiler territory for readers who need even more convincing.

First up: Suicide Risk by Mike Carey, Elena Casagrande, & Andrew Elder. I picked this series up out of blind devotion to Mike Carey, who I love from his work on X-Men: Legacy and Unwritten, not realizing it would become one of my favorite indie comic runs of all time! It’s hard to discuss this series’ massive scope without spoiling it, but it spans genres from police procedural to massive action movie!

I hope you’ll enjoy this new show, because I’ve got over a year’s worth of indie series mapped out to discuss! 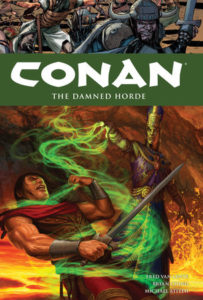 Hmm… now I kind of want to read Conan. This is how it happens. (Note that the awesome cover is not drawn by the interior artist Brian Ching, but I think his art is strong – it’s just not the cinematic style of the cover.) END_OF_DOCUMENT_TOKEN_TO_BE_REPLACED