“Closer” is a perfect song.

It would be amazing even without the f-bomb chorus and the deeply unsettling video, because it shows Trent Reznor in the height of his early powers. He effortlessly fuzed industrial rock with funk influences in a song that is always building, never retreating. 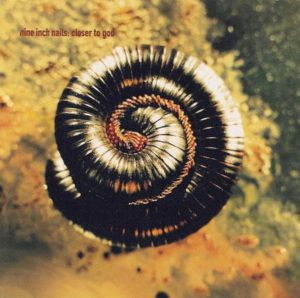 (Yes, funk – go and listen to the synth bass on verse and tell me that’s not influenced by funk. It’s a totally 70s bassline. Then close your eyes and let your booty shake to that chorus and try to tell me this isn’t a totally queer disco cut.)

It starts as simple as possible – kick and snare – though the kick is muffled so it sounds like the heartbeat coming from within your chest while the snare sounds like the sudden exhalation of air. It goes on uncomfortably long – 20 seconds, with no interruption.

Finally, just when the tension is getting to be to much, three new elements appear: the funk bassline, a 16th note ticking of a clock, and Trent’s soothing, almost too-pretty baritone voice singing “you let me violate you.” He sounds so close to us. Not only can we hear his inhales, but the messy little tatters of air that slip out at the end of his words.

Again, just as it’s getting almost too personal having Reznor slinking that far into your ear, more elements are piled on top – a sighing duo of Trents singing “help me” with sour harmony and a hi-hat riding every upbeat. Altogether it feels like a strange parade, and that’s before the debauched thrum of bass and spiral of synth that springs up beneath the guttural “I want to fuck you like an animal” that announces the chorus.

And then, another layer – what sounds like a pounded harpsichord plus the sci-fi warble of a theremin. They in turn are joined by the reemergence of the hi hat ride and a vibrating synthesizer that rises with the harpsichord, oozing into the cracks of its hammered strings. Trent is not so handsome-sounding now. 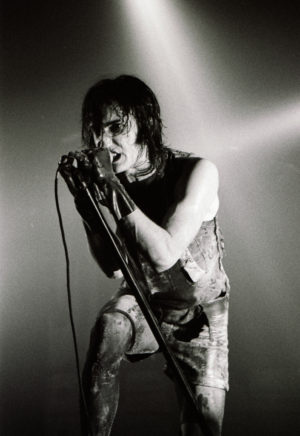 He sounds desperate. Not desperate to fuck – just desperate for anything he can get, and he’ll offer everything he has – all the good and bad:

The second chorus sounds the same, or at least you think so given the cacophony that now surrounds Reznor’s voice, but there is another element – an overblown low flute which occasionally rings dissonantly against the other elements. Finally, the bridge brings some relief, one chance to breathe, stripping everything away except the vibrating synthesizer, the heartbeat-exhale one-two of the drums, and a nasty synth bass hit. But, crawling from the depths of that comes a burning electric guitar, more synthesizers, obscured voices, and random stabs of brutal electronic noise, all heaving and panting towards a climax, that rising harpsichord with the synth entwined, the signature synthesizer, and finally the great chiming descending riff – really, the first riff that has done anything but climb the entire song.

Then, just as hard as it was pressed up against you, it’s all gone, leaving just a warbly electronic piano on its wake and you catching your breath.

And that says nothing of the masterful Mark Romanek video, which can speak for itself. It’s held by many as the best music video of all time. In fact, Reznor himself once said, “The rarest of things occurred: where the song sounded better to me, seeing it with the video. And it’s my song.” Its creepy vibe has always felt inextricably tied to the disturbing imagery in David Fincher’s Se7en, released the following year.

“Closer” is a perfect song.