Yesterday, Marvel kicked off the relaunch of it’s entire X-Men line of comics with X-Men Prime, a one-shot meant to reset the status quo of Marvel’s mutants in the wake of Inhumans vs. X-Men.

This issue represents the first time in many years that I can approach the X-Men as anything resembling a “new” reader. That’s because I’ve barely read a single issue of X-Men in Marvel’s All-New, All-Different era following Secret Wars. I usually trade-wait before reading, and in the middle of trade-waiting I was distracted from my Marvel reading by DC Rebirth and my WildStorm read.

What is X-Men Prime? Is it any good? Will it lead to me reviewing X-Men comics every week from now on? 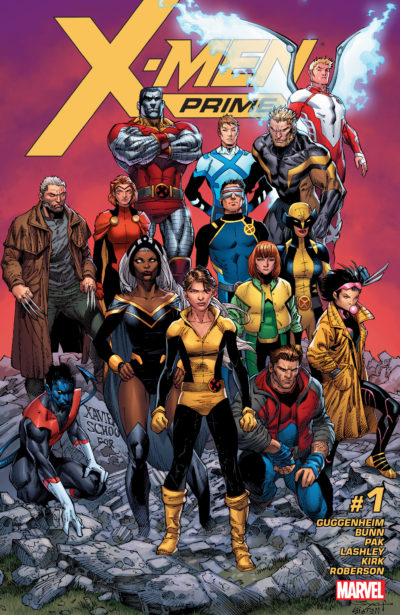 Bottom Line: This “Kitty Pryde: This Is Your Life” issue is an easily skippable recap, more about her as a character than about the last two years of x-comics. It would be a fine free comic, but offers little entertainment for a steep $4.99 cover price.

X-Men Prime is an insubstantial read that still manages to make a major change in the X-Men’s status quo. That comes along with a choice that may or may not work out in the end.

The choice is to make Kitty Pryde the leader of the X-Men, which explains why this issue could just have easily been called “Kitty Pryde: The Return #0.”

Now, let me be clear – Kitty Pryde is never disappointing to me. She is one of my favorite characters in all of comics!

That’s in part because Kitty Pryde is the eternal point-of-view character. That’s been true from her beginnings as the X-Men’s teen sidekick through her years in Excalibur and her return as an outsider first to Joss Whedon’s Astonishing X-Men and then to Matt Fraction’s run on Uncanny X-Men.

Even when Kitty is the heart of a given team, she’s also the rational, grounded character who speaks with the voice of the reader. That’s why it’s fascinating to see her step in to lead dozens of characters we’ve grown to love over the past half century. Can she remain our POV-character when she’s the one in charge of all of the X-Men’s comings and goings? Can she even credibly take charge of characters like Storm, Colossus, Nightcrawler, Iceman, Magik, and more?

This issue does little to explore that reality. It’s more of a “Kitty Pryde, this is your life” walkthrough that focuses more on her relationships than her (or the reader) catching up on the X-Men’s recent history. It also includes minor scenes of the original X-Men and Lady Deathstrike (more on those below).

The strategy of the main story, scripted by incoming X-Men Gold writer Marc Guggenheim, seems to be that Kitty’s emotional ties to the team are more important than detailing anything that’s happened in the past five or ten years, or giving any hint of what’s to come. Aside from the sparest of recaps of Inhumans vs. X-Men by Storm and an explanation of the unlikely location of the X-mansion, there’s honestly very substance little to this main story.

Despite the lack of content, the story still managed to be an emotional moment for me because it features Ken Lashley as the primary artist on a core X-Men title drawing Kitty Pryde. Lashley was one of my favorite 90s artists on Warren Ellis’s run of Excalibur, my favorite comics title of all time. He still makes for appointment reading whenever he shows up on a current comic. So far he’s not announced for any of the upcoming X-titles, and he will be one of the alternating artists on Gold.

More than the dialog, it’s Lashey’s art that reminds us that Kitty is still the heart and rational brain of the X-Men through scenes with Storm, Colossus, Magik, and the teen versions of the original X-Men. It certainly seems she might work as their leader when the issue ends with her saying, “We’re also going to show that world what we are. No mutants. Not freaks. Not homo superior. But heroes.”

Kitty’s words mirror the complaint of many major fans of the X-Men who have been disappointed with their recent status quo. We just want the X-Men to be heroes. Still mutants first, but heroes second before they are an endangered species. END_OF_DOCUMENT_TOKEN_TO_BE_REPLACED