This week EV got her own library card.

She was excited by the prospect. Maybe not in anticipation – even as a book-loving three-year old, I don’t think she really understood the concept of an entire building whose purposes was housing books which you could borrow. Yet, once we arrived and she witnessed the seemingly unending shelf of books she could choose from, the excitement became all too real.

I spent a lot of time at the library as a kid, partially owing to the fact we didn’t have the kind of money that made regularly visiting bookstores an option until I was older. My mother made sure I had books as a constant presence in my life, and though I was late to read I’ve been a voracious consumer of printed material ever since.

I don’t have a good excuse for abstaining from the library until now, other than the fact that E and I both really like owning books. However, three years into the children’s book accumulation endeavor and every possible shelf is filled … which makes this collection no different than our CDs, DVDs, graphic novels, guitars.

You get the idea. We like stuff. Or maybe I’m just a luddite, considering I could have a smaller collection of all of that (even the guitars) if I would embrace digital more.

Either way, E is a wonderful curator of great books for EV, and I’d like to start reviewing our favorites here – as well as covering picks from the library. Even if you’re not a parent, everyone has to get a gift for a kid every so often. I’ll do my best to steer you in the right direction, including noting challenging themes and bad behavior in books, which are both pet peeves of mine.

To start out, I want to highlight one all-star book in our collection which not only is parent-selected and toddler-approved, but also our go-to gift for other kids. 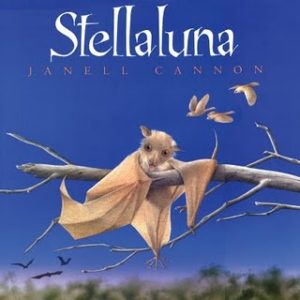 Stellaluna is a charming, positive story full of female anthropomorphized animal characters that includes several interesting hooks for discussion. We’ve found it to be a go-to re-read, not only for the depth of the tale but for its vocabulary and a clever secondary narrative.

Stellaluna is the story of a baby bat who loses sight of her mother and winds up raised alongside a trio of tiny birds in a nest. She has to endure such indignities as sleeping upright and eating worms (she’s a fruit bat), essentially losing touch with her bat identity while struggling to be more birdlike. She later finds her colony of bats, including her own mother. In the process, she learns to love being a bat, but also the differences between her and her bird friends.

The book is charming and attractive. Each 3-6 sentence page is accompanied by two illustrations – one large, colorful one of Stellaluna’s story, and a tiny inset of the untold parallel action of her mother. The main story panels are mostly illustrated in colored pencil and include finely detailed, realistic animals. They’d border on naturalistic if not for the expressive faces, especially of Stellaluna. Somehow author/illustrator Janell Cannon wrings a wide array of emotion from her little fruit bat face without ever crossing into the realm of the cartoonish.

We have the board book version, and it’s probably the longest read of all of our board books. However, it’s average or even a bit short in length for a hardcover kids’ book. It’s rated K-3 reading level, and there is a good assortment of vocabulary in the prose that has required some defining for EV like crooned, clambered, embarrassing, gracefully, anxious, and peculiar.

The confrontation between Stellaluna’s mother and the owl might be scary for young children, especially on first read when your kids don’t know that mom winds up safe in the end. Luckily, the inset second narrative gives you an easy way to diffuse any worries.Her first encounter with other bats could easily go in the direction of bullying, but the bats wind up being curious about her instead – great modeled behavior to remind young ones! 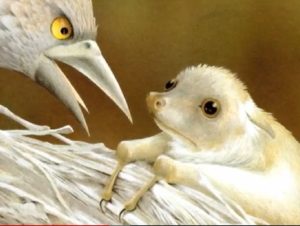 Stellaluna being admonished by Mama Bird. I giggle about Stellaluna’s face every darn time we read this.

Stellaluna is grossed out by worm eating, but manages to avoid “disgusting, ew, gross, I hate it” types of language in favor of simply calling them “awful.” It’s good for a laugh, but beware: she does later swear off bugs for good, so be sure not to make an analogy to broccoli!

A brief theme of authoritarianism with mama bird (“unless you promise to obey the rules of this house”) doesn’t strike me as objectionable. Mama’s request (and Stellaluna’s acquiescence) makes sense in the context of the story and is largely for the little bat’s own safety. It could be a good opener to talk to a child about when it is appropriate to obey adults, especially in a situation when they might be lost or afraid.

There’s an underlying message here about assimilation and sublimation of identity. I am always careful with those themes, not only as a matter of personal opinion but as husband to and father of women of mixed-race. However, Stellaluna handles it with surprising nuance – the bat accepts her role in her adopted family, but easily code-shifts back to being a bat. Still, that might make this a more challenging read for other parents of non-white and mixed race kids, as well as adopted children.

That Stellaluna fields so many rich themes in an easy-to-discuss fashion in addition to being cleverly written and adorably illustrated makes my recommendation even heartier. This is one of the few books in our collection I will submit to reading multiple times in a single day.

Previous Post: « RuPaul’s Drag Race All Stars Power Rankings, S2E02 – “All Stars Snatch Game”
Next Post: on unsolicited compliments, and how little girls should respond to them »