We’ve been reading to EV since the first days of her life, but reading to a tiny squirming baby is a lot different than reading to a curious and opinionated three year old. 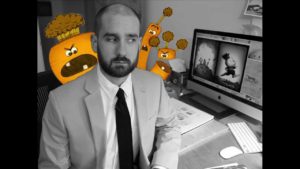 Peter Brown in a YouTube video for his book The Creepy Carrots.

Three year old EV is a little different. She has a long attention span and a voracious appetite for books, but she’s got some preferences to work around. It’s not so much that she dislikes any one book, but that she likes others a bit too much.

We don’t do any “put it on repeat!” behavior in this house (another post for another time), but if EV is crushing on a particular book it quickly turns into a twice-daily read for a few weeks. As the designated reader for at least another two years, when a new book hits the “Crushing EV” list that means my preferences come into play beyond my typical “is this a good message?” filter.

I don’t want anything with language too simple or silly, or prose too basic. I enjoy books with different character voices where I get to do a little acting or situations that leave some room for imagination so I can editorialize. And, strong graphic design and typesetting can’t hurt – after all, these are books I’ll be spending hours with each week!

Mr. Tiger Goes Wild is one book that I was delighted that EV added to her favorites, so much so that finding more by author Peter Brown was my first priority at the library. When we picked up The Curious Garden I expected it to be good, but I did not expect the two books to have such complimentary, synergistic themes.

This pair of beautiful children’s books by Peter King have a lot to say about civilization versus nature, and how the ideal state of the world is a balance of the two. Both books have a positive message and enjoyable prose, and each it rife with interesting topics for discussion.

Peter King’s illustrations are a delight. His characters are all vividly colored and have a slight blockiness to their outlines. They seem to be near siblings to Jon Klassen and even give a very slight hint of Adventure Time. 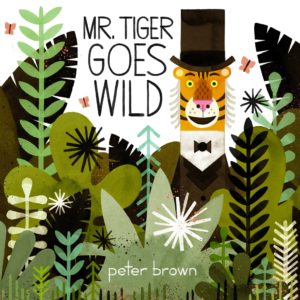 Mr. Tiger Goes Wild is the whimsical tale of a town filled with very proper animals who all dress like pilgrims and walk around on their hind legs. Mr. Tiger feels like something about his routine just isn’t right. After bounding around town on all fours and enjoying some very loud, improper roaring, he decides to take things to the next level and abandon his clothing. His neighbors, already perturbed by his running and climbing, decide this is a a bridge too far and ask that he leave town.

Mr. Tiger enjoys a return to the forest, but eventually misses his friends in town. He returns to offer a compromise on the puritanical dress code only to find that many of the town’s animals have adopted some of his more animalistic habits and are happier for it.

EV loves this book – from the moment of its introduction it has been one she is happy to read multiple times a day if given the chance. Me too, thanks to hilarious pages like the when where Mr. Tiger first has his wild idea. At first, she was more enamored with the variety of the animals in the town, the comic style word balloons that made it obvious who was speaking, and the cuteness of Mr. Tiger. As she has aged, she is more engaged with the plot, why Mr. Tiger wanted to be wild, and Mr. Tiger’s return to nature (and then again to society).

EV has repeatedly initiated discussions about why the tiger is even wearing clothes and if it would be okay for her to take off her clothes outside. If you don’t like your books with a side of thought-provocation, then this might be off-putting – but, we love those kinds of books in this house. I think the topic of what it means to be civilized (and what’s just puritanically-derived custom) is perfect for a little wild thing who is learning to tame their toddler urges and interact with the world around them.

Since we love Mr. Tiger so much, The Curious Garden was the first book I plucked from the shelf the day EV got her library card. Like Tiger, it has inspired intense love from both EV and we parental units, but it’s a very different sort of book with its own message about how the best elements of nature still need some cultivation to blossom. 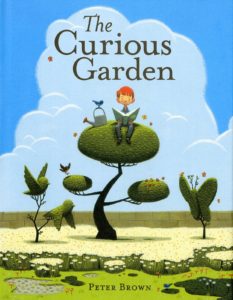 In The Curious Garden, Liam loves to explore his dreary post-industrial town full of decommissioned smoke stacks. He cannot resist the temptation of climbing a set of stairs to explore an unused viaduct that used to carry trains on its tracks. Between the rails, he discovers what might be the only hint of green and color in his entire town in some sad little wildflowers. Liam can’t bear to think of them alone on the tracks, so he learns to be their gardener.

Soon, the entire abandoned track is blossoming, giving Liam even more room to explore. The next spring, his garden is so well-cultivated that it blossoms outward, covering the entire city and creating more gardeners. Years later, Liam is still tending to his little viaduct with his family.

The Curious Garden is a more somber read than Tiger. Beyond Liam’s solitude during the story (there is no dialog), perhaps that’s due to the themes of pollution and urban decay. There are also a number of wordless pages showing the city’s transformation. Your reader might simply rush past the wordless pages – I make sure to have EV play some eye spy with the plants growing there and other small details of the city.

As with Mr. Tiger, Garden has a theme that resonates even though it may not be our ideal as adults. While greening the city is a positive thing, many of us spend time pulling weeds and pruning bushes, so this transformation of green taking over doesn’t hold the same kind of satisfaction as watching a tiger remove his constraining garments.

That’s part of what I love about Garden – it’s teaching our children about a beautiful green world many of us city-dwellers have never had the chance to occupy. The final image of the formerly dingy city is full of vibrant spaces – viaduct parks, green roofs, fields, and gardens. It’s not only attractive, but healthier and more sustainable for all the city’s residents.

While younger readers may be inspired to start their own garden, for slightly older kids, the challenge of this book will be to temper their sudden urge for unbidden urban exploration – especially considering a lot of freight train tracks can seem unused when they simply carry trains at odd hours. You may want to do some editorializing about how Liam asked permission from his parents or did research about the tracks if the message needs reinforcement for your reader. Also, if you have some reclaimed green spaces in your city, this book gives you a great opening to explore them!

Taken as a pair, King’s books represent a profound dialog about our relationship and occasional subversion of the natural world. While your little reader enjoys the illustrations and the amusing developments, you’ll find yourself ruminating about nature, your place in it, and if you should perhaps get a little bit closer.