You are here: Home / consume / reviews / Children’s Book Review: At the Same Moment Around the World, Linus The Vegetarian T. Rex, and more…

EV and I made our first visit to the library two weeks ago. I wasn’t sure how EV would warm to temporary additions to her library. I shouldn’t have been concerned – we’ve average at least two reads a day on all of the positively reviewed books.

EV had one a clear favorite in this bunch, which I also thoroughly enjoyed (aside from some squinting).

At the Same Moment, Around the World by Clotilde Perrin

EV was slow to warm to this book, which includes a look at a slice of life from each of 24 time zones around the globe. She quickly become obsessed when she realized each page featured a different kid and many small details to hunt.

I find the book delightful. It’s full of kids and teens doing everyday things, like helping to catch fish, rehearsing for a parade, and watching the world from a train. Each two-page spread features a full-bleed illustration that transitions between its two time zones. If you examine the outer edges of the page you’ll see that each image seamlessly continues over the edge of the page to the next – the book forms a continuous loop of art!

The text consists of just two sentences per pages. It is small and can be hard to read against many of the colorful painted backgrounds, at one point reversing out to white against a light background. The book should have added a screened, transparent box behind type and took it up two point sizes. Additional content includes an education spread on time zones (didn’t hold the toddler’s attention) and a fold out map of the world with all the characters connected to their cities (toddler is obsessed with this!).

After a few reads focusing on the words and the main action, EV and I started engaging with the background details of each location. There are many – enough to create multiple runs of “eye spy” through the book if your little reader gets obsessed with it. 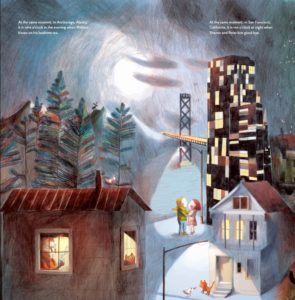 Perrin carefully balance her distribution of genders and activities across the different cultures, such that most of the times I felt like it was reinforces a stereotype it quickly reversed. However, the some cultural stereotypes persist: Iraq is the only non-First-World country to have a large metropolitan area depicted, while Europe and America don’t focus as much on agrarian lifestyles.

There are other books that do individual elements of this better – showing different places and cultures, telling the story of every day tasks – yet the combination of that with the concept of time zones is clever. That might make this a great library check-out before a kid’s first big trip that crosses time zones. If you’re considering adding this to your bookshelf, note the odd dimensions of this book – it is 13″ high by 7″ deep.

There were six other books from this week’s library, including an imaginative dinosaur tale and a whimsical book that I had to edit due to some tacit misogyny! 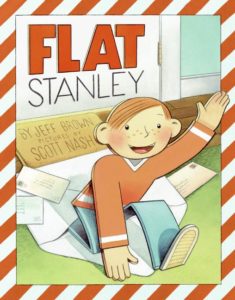 Gender Diversity: Male protagonist and all male supporting characters; mom has two lines
Ethnic Diversity: None
Challenging Language: “Hay is for horses” (I enjoyed that), darndest
Themes to Discuss: misogyny, teasing, science experiments in the home

This whimsical book about a boy who is made flat after being crushed by a bulletin board in his bedroom isn’t appropriate reading for kids with accompanying discussion. This is a 2006 re-illustration of the original, by Tomi Ungerer – the first in a Flat Stanley series. I’m disappointed the re-illustration didn’t include some minor edits.

First, Stanley protests about looking like a girl. There’s nothing about the context of the story that warrants this and it adds nothing – it simply reinforces that little boys don’t want to look like girls. I simply omitted it. Then, the thieves remark “I thought sheep girls were supposed to smile” and refer to Stanley as a “pretty little thing.” Sure, they’re the bad guys, but I didn’t like the tacit reinforcement of girls needing to smile to be worthy of paintings.

These are the minor assumptions about gender differences that seem harmless in but wind up encoded on kids of both genders from an early age. I don’t think they’re appropriate for a child who can’t understand the explanation of why they’re poor assumptions, and I wouldn’t want an early reader encountering them on their own.

If you get stuck in a waiting room where this offensive tome is the only option, you’ll need to explain that this book is just a fantasy – while your kids aren’t likely to mail themselves in an envelope or be flown like a kite, they might try to pump themselves up with a bike pump (mine immediately wanted to try it). 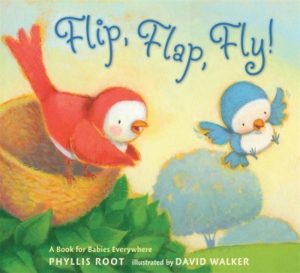 Gender Diversity: All mother/son pairings
Ethnic Diversity: Not applicable
Language to Avoid: None, but many made-up words
Challenging Themes: None

This book’s simple, rhyming language makes it a cute board book read for babies or a hardcover for early readers on their own, but it wasn’t a good for for reading to a toddler.

The book describes the exercise of a sequence of baby animals, each endeavoring to learn their singular verb (fly, swim, crawl, etc). The plain repeated language and nonsense rhyming words remind me a lot of Chicka Chicka, Boom Boom, so if you enjoy reading that sort of thing this could also be up your alley – sans the clever alphabet play.

The simple meter broken across pages and a lack of a narrative or significant educational content saw this quickly fall into the “return these first” pile of library books. While there’s nothing wrong with it, neither of us seemed to be especially interested (beyond EV’s tacit “aww, cute!” reaction to babies of any species). 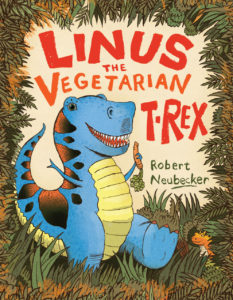 Linus is right on the verge of being the sort of frivolously cute book I wouldn’t give a second read based simply on its text and plot, but it has two positive themes that seem to resonate with that toddler – plus a third I always love.

The first is its young female protagonist, Ruth Ann, who loves the Museum of Natural History and knows everything about dinosaurs. EV also has a membership to a science museum and is obsessed with dinos, and this is the first time she has seen herself reflected in a book rather than reading those traits about a male character.

The second is that Ruth Ann doesn’t let her knowledge get in the way of her creativity. When she visits an exhibit whose facts she likely knows all about, she instead uses her imagination to transport herself on an adventure with a giant blue vegetarian T. Rex who eats all sorts of anachronistic fruits and veggies.

(The joke – which is set up with several page-turn punch lines – will be lost on a kid who doesn’t know that T. Rex’s are carnivorous, which Ruth Ann doesn’t say explicitly until much later.)

And third, Linus is perfectly happy with being a different kind of T. Rex and Ruth Ann comes to love him for it. A lot of books that try to reinforce this “differences are okay” theme either make the differences out to be scary or something to be contained so you can it in. Linus does neither.

The art work is cartoonish and cute, with smiling anthropomorphized dinosaurs. Ruth Ann can seem a bit flat in comparison to Linus, who is like a more charismatic Barney The Dinosaur. It’s hard not to deliver his dialog with gusto. Also, I appreciated a pair of feathered velociraptors, which speak to its 2013 publishing date.

Number One Sam by Greg Pizzoli 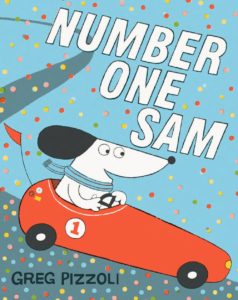 This 2014 early readers book was an EV choice from the shelf, and we enjoyed it. It’s a simply written story about a dog who loves to be #1 and what happens when he loses, both intentionally and unintentionally.

This book has a great message of not always needing to be the best, being happy for others’ successes, and how helping is more important than winning. Every time I’ve been through it I marvel at how quickly it pivots from a book that’s playing with language (“number one at being number one”) to a book with a resonant message. I’ve got a lot of good will for it, and would definitely recommend it to parents of competitive kids.

That all said, the writing is plain and doesn’t invite a lot of fun inflection for a parent as a reader. It’s a quick read and a fine library loan, but it’s probably best for early readers who can sound some things out and are more receptive to the positive message. That’s reinforced by Sam as a narrator who is mostly self-focused – no other characters get a line. 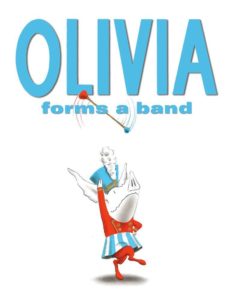 I don’t believe in reading toddlers books that model bratty behavior without emphasizing choices and consequences, nor in incoherent books that exist just for silly punchlines. Olivia plainly fails both my litmus tests.

This spunky little pig would like to form her own band to accompany a fireworks show. Unfortunately, Olivia’s schtick is behaving terribly save for brief breaks where her shrill mother (or the art itself) chastises her for her most inoffensive behavior, like being choosy about her socks or needing to go to the bathroom. The exchange where Olivia puts on make-up is the oddest one. Yes, Olivia is likely too young for her beautiful red lipstick, but mother’s anger doesn’t seem to fit the misbehavior. (And, isn’t that “glop” her lipstick?)

EV really liked this book since it involved a little girl playing instruments, but I was annoyed by something on almost every page. Past that, there’s just no point to this story – Olivia makes herself into an awesome one-piglet-band by brusquely stealing things from other family members and then abruptly discards her plans for no reason, leaving all of their possessions discarded on the floor. Yes, we get “And they were beautiful,” about the fireworks, but that’s hardly a payoff of why it was a good idea to leave the instruments at home. Basically, the entire plot is forgotten until it becomes a punchline about Olivia not cleaning up her toys on the last page.

I’ve grown less surprised when the characters who’ve merited series of books and other merchandise tend to be the most annoying or problematic, and Olivia is no exception.

Also, the page of a smiling Olivia wearing lipstick collaged to include real human teeth is terrifying. And, finally, a fold-out page of simple sheet music is hardly warranting the extra production – and it was dull to play ( in this household we play all legible sheet music that’s incidentally pictured in our books).

Previous Post: « RuPaul’s Drag Race All Stars Power Rankings, S2E03 – “HERstory Of The World”
Next Post: Crushing On: The Gay and Wondrous Life of Caleb Gallo »