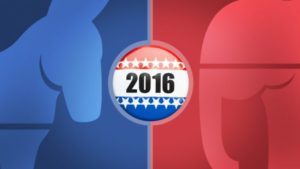 I’m live-blogging the debate tonight in the same format I have in the past – assigning values as we go.

On specific rebuttals, candidates compete for their own total of 3 points in individual rebuttals.

On crosstalk, I will award up to 5 points to either candidate I see fit.

Clinton: Pivots into an opening speech, invokes her granddaughter’s birthday. “Invest in you – invest in your future. Jobs in infrastructure, advanced manufacturing,” technology. Also wants to raise minimum wage, guarantee equal pay for women, introduce profit sharing, supporting people struggling to balance family and work. “Difficult choices you face and stresses you’re under,” hits family leave, sick days, asks the wealthy to pay their share. Says, “Donald, it’s good to be with you.” “Who can shoulder the immense, awesome responsibilities of the presidency?”

Points: 4 of 7. The typical big plan you hear from a president, but it’s credible.

Trump: “Our jobs are fleeing the country. They are going to Mexico and to many other countries. Look at what China is doing to our country – [?] our product and devaluing their currency … they’re using our country as a piggy bank to rebuild China and many other countries.” Mexico building some of the best plants, some of the “the most sophisticated plants.” “As far as childcare and so many other things, I think Hillary and I agree on that … but we have to stop our jobs from being stolen from us, our companies leaving the United States and” firing everyone. I’ll be “reducing taxes tremendously … for small and big businesses.”

Points: 3 of 7. Trump gave a terrific recap, but he seems focused on an old style of economy that’s focused on industry that we might not even have anymore.

Clinton rebuttal: “I think trade is an important issue, we’re 5% of the world’s population and we have to trade with the other 95%.” Immediately chases his tax plan, “trickle down economics all over again.” Calls it “Trumped up trickle down,” almost gets a reaction from Trump. Hits hard, “the more you help wealthy people … the better off people will be.”

Points: 3 of 3. Could not have been better or more effective to rebut Trump.

Trump, on creating 25 million jobs and “brining back the industries that have left this country.”

Trump rebuttal: “My father gave me a very small loan in 1975 and I built it into a company that is worth billions and billions of dollars” and some of the biggest? best? assets all over the world. “We have to renegotiate our trade deals.”

Points: 1 of 3. He already seems a little rattled and imbalanced. He tries to say that Clinton should have been “doing this for years” in terms of fixing bad trade deals, but it’s not connected to any kind of answer. Also, he’s got to blow his nose (or bump some cocaine, not sure.) Holt needs to interrupt him to try to get him on track. He’s rambling crazily now.

Clinton: Doubles down on “where we were 8 years ago” – slamming the Bush presidency, pinning cheering for the Housing Crisis on Trump (he interrupts, “That’s called business, by the way” – not a good look). Clinton, “we’ve come back from that abyss, and it hasn’t been easy. … The last thing we need to do is go back to the policies that failed us at the first place. Independent experts … have said his tax plan would blow up the debt … disadvantage middle class families. Trump interrupts again as Clinton continues to slam him and his plan (this time on climate change).

Points: 3 of 3. Makes Trump look like a liar, let’s him have repeated reason to interrupt her.

Trump: “We’re putting people out of work – our energy policies are a disaster. … You can’t do what you want to do with 20 trillion dollars in debt.” Hillary Clinton’s poker face is masterful. Between Two Ferns was clearly good rehearsal. Turns into crosstalk. Clinton invokes, “Well, my husband did a pretty good job.” Immediate loss of all points in this cross exchange. No one wants to vote for her based on Bill’s record.

Further crosstalk. Clinton again, totally destroyed by Trump, trying to interrupt him to root for Bill again. Clinton almost gets a head of steam going, says NAFTA was bad “in your opinion” and that Trump “lives in his own reality.” All bad looks for her.

I have to say, the screaming, interrupting Trump is not attractive in the slightest, but he’s doing it to goad her into her worst habits and she’s going for it.

Trump: Flat out says “the wealthy will create jobs” and makes it sound … credible? I mean, if you believe him at a base level then you would believe that – that the wealthy can act altruistically if you just reduce taxes and regulations.

Clinton: By the end of the debate, I’ll be blamed for everything. This was a taste of the good, fun kind of Clinton humor. Trump is interrupting her repeatedly in her own time. The downside of him getting wound up and delivering good oratory is he’s still fired up and cannot let Clinton speak. She pummels him hard, repeatedly, with numbers and statements like “Trump loophole” while he pretty much screams incoherently. When he finally quiets, he looks like he’s biting the inside of his cheeks as hard as he possibly can.

Trump briefly rebuts: “Typical politician, all talk, no action” “We’re in a big, fat, ugly bubble.” Here is Trump making sense again – talking about interest rates and how they will quickly alter the economy and the Fed being political.

Should Trump release his tax returns?

Trump: Says he’ll release his returns as soon as his routine audit is complete. Recites his income from the prior year. Says, “this is the kind of thinking our country needs.” Hammering the trade deficit. He’s not especially coherent on these points, but Clinton hasn’t found a good way to refute. “It’s almost become a way of life – I get audited by the IRS, other people don’t. … I will release my tax returns as soon as she releases her 33,000 emails she has deleted!”

I don’t even know how I can possible assign points to that word salad, so I won’t give any points to Clinton’s incredibly nuanced rebuttal about potential reasons to not release his tax returns – except… you can just reverse every word she said and replace “taxes” with “emails” and “IRS” with “FBI” and it would read pretty much the same.

On her emails, Clinton: “That was a mistake, and I take responsibility for that.”

I… can’t live blog this anymore. This isn’t a debate between two people who should be president, and I cannot possibly treat it as such.