You are here: Home / consume / comic books / From The Beginning: WildStorm Universe – Backlash #6-7 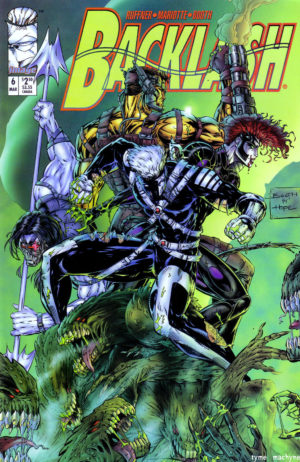 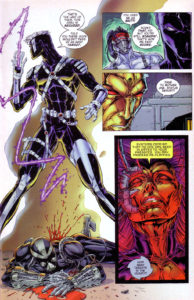 In Backlash #6 the VR device that Backlash and Taboo swiped proves great for eavesdropping on S’Ryn’s base, and Backlash calls in a favor to have Dane and Grail from Wetworks do the infiltrating with him. They seem to still be on good terms with Mother One (which probably places this prior to Wetworks #6).

Backlash succeeds in nabbing S’Ryn and blowing up his base, but his powers briefly ebb in the process. Dane and Grail also escape safely, though they briefly tangle with Pike and a Coda on the way out. An escaped Pike looks over the wreckage and ominously implies that Backlash might not know “the truth about himself.” Meanwhile, Cyberjack and Taboo whisk Diane away from her hospital (but not before Taboo daydreams about eviscerating her for fun). That trio, Backlash, and S’Ryn all meet back at Marlowe’s Halo Building in NYC after #18 (because Voodoo is up and about), which makes no sense whatsoever since the entire team immediately deploys to capture Hightower in #19.

Not only does Voodoo manage to heal Diane’s psyche, but she expels S’Ryn’s Daemonite from from his human host. The Daemonite considers possessing Backlash, but not before Backlash can possess him… sort of. Backlash actually turns to mist and rematerializes inside of S’Ryn, causing him to explode. His head and torso live on long enough to reveal Backlash has Kherubim blood in his veins, which Void surmised back in issue #4. 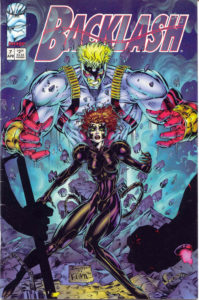 Backlash #7 begins with Slayton training with combat droids on loan from Marlowe in the woods behind Marlowe’s upstate New York cabin. I guess now that Backlash is a Kherubim he’s on Marlowe’s permanent good side? He’s tucked away at the remote location to test the limits of his powers and also to get Diane back into shape after her long coma. They flirt in a broadly sexual manner the entire time, and Backlash finally gets to finish proposing over dinner (he was interrupted back in Stormwatch #4). 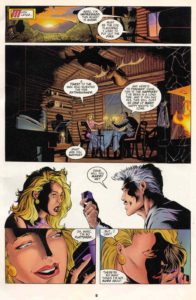 However, Diane can’t accept – she’s disturbed by all the laws he broke to save her, and she can tell there is something between him and Taboo. Backlash storms off, and Diane hangs up on a desperate call from Taboo so she can call in to Stormwatch for a pickup.

Taboo is on the run with West Virginia with multiple law enforcement agencies on her tail. A team of mercs catches up with her and she makes quick work of three of them, but a massive wall of a man named Brawl drops her in her tracks.

Then, in Australia, a character I totally don’t recognize who might be the WildStorm version of a ThunderCat is visiting the grave of his adoptive father, who broke him out of an IRA assassin program. Uh, sure. He’s seemingly on this road trip with Defile, which must be tons of fun. There’s the implication that he might be a stowaway Kindred raised away from their isle, as he’s definitely meant to hunt down Backlash.