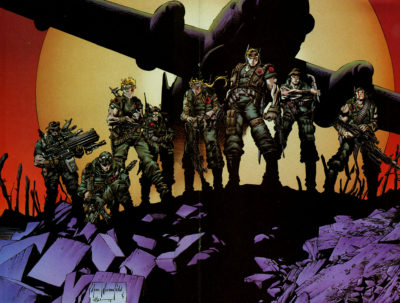 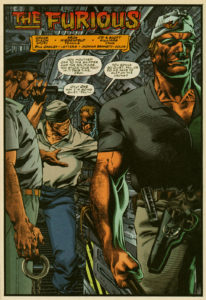 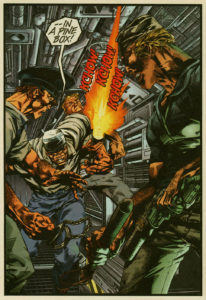 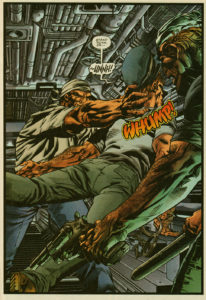 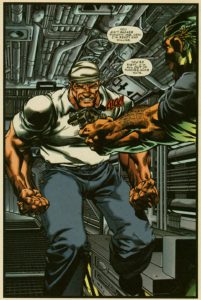 And now, onto the story! 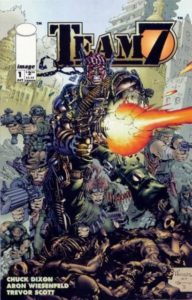 Team 7 #1 opens with the team descending into a war zone, guns blazing. They’re meant to be saving hostages, but find only stuffed dummies tied to chairs. They’re so deep into enemy territory that Lynch calls in carpet bombing right over their heads and they retreat to the depths of a sub-basement bunker to survive. They’re a volatile bunch, especially Cash and Cray, an outspoken pair in constant conflict with others and between themselves.

Who would send the world’s best team of mercenaries on such a deadly mission with bad intel? The man in charge is Director Craven, the same as today – only here he’s uncannily drawn to resemble our modern-day Lynch. He claims they were burned by a bad informant who has conveniently since been killed. Craven shows Lynch a silent video of the team’s next objective – investigating some form of torturous device in an African nation that sent a room full of prisoners into a feral rage.

The mission feels off right from the drop, when the team lands next to a lime pit filled with the remains of the dead. Under heavy fire, the team makes it into a heavily guarded complex – but it’s just a warehouse, not the high-tech lab that Craven’s video suggested. Lynch hears a subtle hissing sound, and realizes too late why Craven omitted the audio from his video – it’s so Lynch wouldn’t know they were being subjected to the save device until it was already too late! 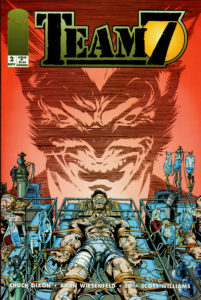 In Team 7 #2 Craven and his creepy old assistant Gabriel Newman land amidst the carnage left in Team 7’s wake to supervise the retrieval and transport of the team – all in comas in the wake of being exposed to “Gen-Factor” (which we first learned about in The Kindred).

Lynch awakens a week later in a hospital unit under observation of Alicia (wow, she’s been around as long as the rest of them!). Craven quickly steps in and pins the team’s fate on a second round of bad intel, exactly as he did the first time. Just down the hall, Berckmann is bleeding from every orifice in a tiled room and MacNamara explodes with rage against his captors – literally. He vaporizes several guards and medics with a blast of energy before he can lay a hand on one of their guns to kill himself.

And then there were 9.

Gabriel has some form of psychic sensitivity and wants Craven to excuse him from contact with Team 7, whose proximity cause him “psychic agony.” Craven insists that Gabriel is the only one who can tell if the program is a success. Not like level nine, Gabriel quickly retorts, though Craven quickly denies that the level exists (later, Gabriel walks by the supposedly non-existent level and something calls out to his mind).

Craven decides to brief the team in person, but his typical slick B.S. routine doesn’t fly with Cash, who insists Craven is lying as he unconsciously probes Craven’s mind for answers. Gabriel quickly shuts down the probe, leaving Cash thinking it was his imagination.

It’s not just Cash who is exhibiting signs of unusual psychic abilities – it’s everyone except Cray (which Craven implies is intentional). Chang can casually field strip a revolver and reassemble it in mid-air.

Despite their burgeoning abilities and questionable mental state, the team is deployed again to a country in the East of the African continent. They blow their way to their target, but Johnson goes rogue, breaking into the President’s compound ahead of the rest of the team and forcing the illegitimate ruler and his advisors to kill themselves. 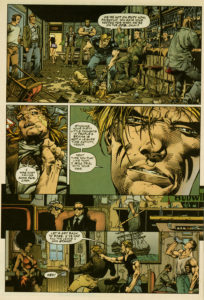 Lynch and Cash catch the end of this display, and Cash guns down Johnson with no hesitation. He seems fully attuned to how much danger their powers pose and he wants to leave no room for potential villains. Lynch threatens to kill Cash but won’t go through with it – so the secret remains with the two of them.

And then there were 8. 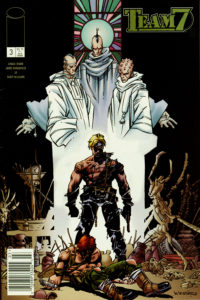 Team 7 #3 finds the team exfiltrating by helicopter, another bad tactical call that finds them under heavy fire until Dane causes all of the enemy shells to explode inside their weapons. Back in the states, Craven uses Gabriel to probe Lynch for what happened with Johnson, but he’s already too strong for Gabriel to break through. Rather than alarming Craven, this seems to embolden him. It’s time for a “final test.”

That’s probably a good thing, as the team can barely contain their collective rage during their downtime. Fairchild almost uses his ability to force a woman to kiss him at a run down bar until Cash – the team’s own internal policeman – violently intervenes. While they’re not deployed, Alicia breaks the news to Cray – without any exhibited powers, he’s off of active duty.

And then there were 7.

The team is deployed on a fourth questionable mission. They hike through the desert only to find (in a reference to Deathblow’s opening arc) they’ve been sent to a decrepit monastery rather than the nuclear materials rendering site they were sent to disable. You have to wonder how they’re all so ignorant to Craven so actively attempting to get them killed (or worse), and it turns out Cash the god cop isn’t. He confronts Lynch, and they have a powers vs. powers blowout that shatters the remains of the ancient structure. 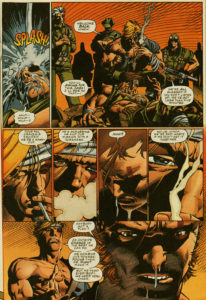 Cash wins and checks in with his air carrier support, who relay a message from Craven to stay put. However, Cray (who is riding along the carrier as ops) catches Craven on a hot mic asking to initiate “spoilsport” and also surmises his teammates have been sent headfirst into a trap.

It’s too late – as he’s taken into custody the ship has already fired a cruise missile at the monastery. 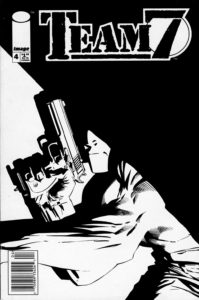 In one spectacularly drawn sequence, Cray stages a one-man mutiny on the ship and fights his way back to the control room to radio a warning to Team 7. Then he holds the ship hostage as a bargaining chip with Craven until he’s sure his teammates have escaped to safety.

In the other, the team languishes, exposed in the desert, wondering how they can stop Craven from wiping them off the map once Cray tips them off. Cash realizes they cannot outrun the missile’s payload, so their only chance is to combine their powers Kumbaya-style and hope they can deflect the blast.

They do just that, and far away as Russia those sensitive to massive scale super powers can feel the shock wave of their actions. The series ends with Cray in military prison, with his only means of escape an unsavory bargain with Craven, and the team in the wind in Nicaragua.