You are here: Home / consume / Crushing On / Music Monday: “Running Up That Hill” – Kate Bush

The entire internet is talking about Kate Bush today.

I love it! (If you’re wondering why, it has to do with yesterday’s post. If you’re ready for spoilers, Variety has a great write-up and interview about it.) 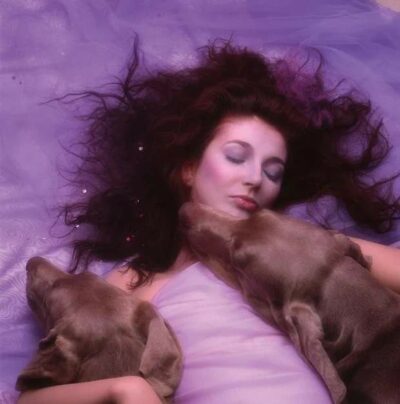 I came to Kate Bush relatively late in my life of music consumption. As a teen, my main lady piano rocker who communes with the ethereal world was Tori Amos.

I’d encounter older music fans who felt Tori was derivative of Kate Bush, so of course as a major Ears With Feet (that’s what Tori fans were called, in her heyday) I completed eschewed Ms. Bush for nearly a decade, until I picked up her LP Aerials at Tower Records in 2005.

That record was certainly Amos-esque, so I felt I finally understood the comparison. Imagine my surprise when in 2018 I finally dug into the rest of Kate Bush’s catalog to discover how much more she is than “lady piano rocker” (just as Tori is, as well).

I’m sure I had heard “Running Up That Hill” many times prior to that (including from Tori’s own cover of it, medleyed with her own “God”). It hit me in a completely different way when I finally I listened to it in the context of opening of Hounds of Love

The insistent galloping of the drums. The strange synthesizer sighs swirling around my head, darting from headphone to headphone.

And, that iconic chorus:

Say, if I only could, oh

When I first heard “Running Up That Hill”, it made me think of Sisyphus. His is the eternal struggle of pushing the same boulder up the same hill every day, only for it to roll back down again. He is the undying patron of lost causes and impossible struggles.

Would you willingly exchange places with him, even for a day? Could you survive?

Or, do you wish you could put someone else in your place to understand your own unending struggle – whether that is with chronic pain, or mental health, or your past experiences, or your identity, or anything else? Bush asks in the first verse, “Do you want to feel how it feels?”

I’ve since learned that Kate Bush wrote “Running Up That Hill” in part as a comment on a woman trying to share her experience with a man. If only he could walk in her shoes for a day, would it fundamentally alter their ability to communicate? What if he could feel her feelings, feel the burden of what she carried every day, rather than just hearing her try to articulate it.

Maybe my conception of the song isn’t that far off from Kate Bush’s intention. The question is: What is the Sisyphean struggle, in her version? Is it this woman’s work? Or, the work of trying to communicate that to a man so that he understands?

Or is that the same struggle?

This is the real way that Kate Bush is not so unlike Tori Amos. It’s not the piano keys or the soprano vocals. Both of their song catalogs are deeply personal, deeply feminist – aware of and empowered by their bodies and their femininity, their anima. They’re also metaphorical, mythological – full of interwoven threads of canon that hint of an awareness of the ethereal aspects of the world that hover just beyond the edges of our vision.

(I actually think there is a supernaturally-aware woman keyboardist in every generation of rock. I’d trace backwards from Kate Bush to Stevie Nicks and Laura Nyro, and forward from Tori Amos to Evanescence and either Lady Gaga or Florence + The Machine. But, that’s another post entirely.)

That is why “Running Up That Hill” hits so hard, both on its own and in the context of Hounds of Love. It’s why it can evoke Sisyphus as easily as feminism. It’s why it works both for scenes of connecting with your own identity as well as in action-filled moments of visceral horror.