Even before I had the internet I was always interested in connecting to people who I could understand on some intrinsic level.

In my pre-internet age, one of my favorite comics was Sam Kieth’s The Maxx. Many issues of The Maxx had a pen pals page tucked into the back. The idea of it thrilled me – some equal yet opposite alterna-comic fan flung far across the country could trade significant thoughts with a distant speck of me.

I whined and begged my mother for permission to write to some pen pals or, even better, to send in my information to be listed (because, surely each pen pal was reaping hundreds if not thousands of letters from eager writers such as myself).

I was flatly rejected. Repeatedly. Because, as far as my mother was concerned, it was the goal of the entire population of America to seduce me into acquiescing to a quiet, tidy kidnapping. Who knew what kind of lunatic was lying in wait for impressionable young comic fans such as myself to engage them in witty adolescent banter, only to suss out the likeliest kidnappees and stealthily infiltrate their homes in the night.

I shortly and unsuccessfully agitated for a P.O. Box, and that was that.

(Why didn’t I just send in the damn letter with telling her? Who knows. That is how good of a kid i was.)

When I first started Crushing Krisis one of my favorite things was to not only find and link to a new blog, but to get into a longterm habit of reciprocal linking – carrying on a sort of turn-based dialog in a series of blog posts meant not just for each other, but for our entire audience(s). In a way it was like a comic-book crossover.

Sadly, in most cases only my side of the chat still exists – six years of blogging yields quite an attrition rate. Of my virtual pen pals even the most venerable and permanent-seeming blogs I exchanged links with are gone. All but one.

Wockerjabby was a strange creature – six years ago just a clean layout emblazoned with a purple dragon, talking about college and exercise and veganism and astrophysics. Rabi, pronounced just like “Robby” (cotton on?) was… a girl? A girl named Rabi living just a few miles from my apartment? An awesome, intelligent, health-conscious, blogging girl name Rabi going to college around the corner from my favorite malll?

I was hooked from minute-one. And, just a few hours later, Rabi noticed my link and wrote me a nice email. And (nearly causing me to have a heart-attack in excitement) linked back.

Afterwards i started a (somewhat embarrassing, in retrospect) linking campaign professing my blog-love, and Rabi continued to reciprocate, carrying on merry conversations via email all the while.

If the story plateaued there – two bloggers trading links for six years – it wouldn’t be too remarkable.

We continued through Blogathonning and late night IM conversations discussing “Peter’s-Head Romantic Gravitational Units,” and a lengthy walk through night-time Philly, and somehow wound up flying together and then road-tripping together to Boston for concerts, followed by multiple iterations of walking the breadth of NYC and Philadelphia, eventually coming-of-age and enjoying martinis in both locations.

All of that from one link, six years ago yesterday. Not only a best internet friend, but a best friend.

Ever since Rabi’s link has always appeared on my link list. And, six years later, CK is still on hers.

It’s hard – still hard, even with blogs and MySpace – to thwart the natural tendency of our social circles towards homogeneity. Your friends will always have something in common with you, because if you have nothing in common the spark of friendship never catches, and a year later you’re left wondering why someone is still on your friends list. Because of the limits of the physical world, usually many of our friends wind up having the same things in common with us.

The allure of The Maxx pen pals and, later, the internet, is the offer of hundreds of different tangential contacts – small intersections of interest. The long tail of meeting people, the joy of which is following that connection to find even more connections.

In Rabi I have found the unique overlap of blogging, of loving music, of eating strange vegetarian foods, of remaining dedicated – even obsessed – with staying vibrant and real.

Probably way cooler than anyone i could have met from The Maxx.

(ps: Rabi, your Trio got usurped because i don’t know how to play two of the songs yet. Consider this your Trio IOU to be redeemed when i have more than a day to learn three songs.)

Have you ever wondered why you look so funny in pictures?

It is apparently a misconception that thirty frames per second is as fast a speed as the human eye can appreciate. Tests have proven that our eyes can discern the increase of quality between footage shown at 30fps and 60fps, and past double that at 129fps; an average would seem to be from twenty-five to fifty. Still, there is definitely an upward limit of how many individual subdivisions of a second our eyes can discern before something appears to be in a wholly fluid state of motion. Furthermore, our ability to enjoy movies (24fps), television shows (30fps), and computer games (90fps+) is aided and abetted by other functions of our human machinery … specifically our (somewhat selective) abilty to perceive motion blur.

A typical point & click camera has an approximate shutter speed of a sixtieth of a second if you’re using a flash, which i do on almost all occasions. Shutter speed denotes how quickly the shutter opens and closes when it does all of its camera magic to get an image onto your film. To crib from my last link a bit, this means that something moving 60 miles per hour would probably be a blur in my own flash photography; the object would be moving 17.6 inches in a sixtieth of a second – plenty fast enough to be blurred in a photograph.

My camera catches a glimpse of something which occurs in an amount of time as proportionally small compared to a second as a second is compared to an entire minute, which is something the human eye usually refrains from observing unless it’s paying very specific attention. Totally forgetting for a moment about angles and lighting and contrast and all of that, a camera is probably more likely to capture a likeness of you that you don’t recognize than it is to reaffirm what you saw in the mirror this morning. The click of a shutter can capture our brightest smiles just as easily as it can catch that strange inbetween moment before the smile has fully formed or that slow downturn of lips after a false photo-smile has been prematurely disposed. Add to that the lighting, and what angle the shot is from, and what color the wallpaper is … it’s almost a wonder that we recognize ourselves at all.

The photo newly appearing to the right of this block of text is how i really look; rubber-stamped and approved as an faithful likeness of myself. On the way to and from Boston i took seventy-five pictures; only a few of them actually caught the images i thought i was seeing at the time, and i don’t think Elise & I look especially like ourselves in any of them. Nonetheless, here are 42 of them, so that you can judge for yourself. 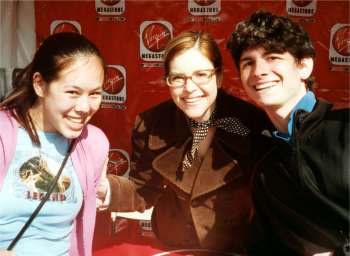 Okay, so, here’s the really hard question: who’s the cutest?

Wow, where to start… Elise and I are leaving now to go sit in front of the Electric Factory for about eight hours, hopefully meeting Garbage somewhere in between sitting for hours and then standing for hours once i get inside the show. And, as if that’s not exciting enough, we’re then headed back to Drexel to pick up Kat & Rabi and then hit the road to head up towards Boston, where we’ll be seeing Garbage (again) and Lisa Loeb tomorrow. And, then, we’re driving back.

I’ll be paper -logging the entire time, and i might squeeze in a few entries (although i don’t suppose that’s the sort of thing you can do from rest stops). But, if i’m silent, just know that i’m with three of my favourite people seeing my favourite band in my other favourite city. Have a great weekend.