I’m not much for wearing costumes, but I do have a year-round love of the slightly macabre that has bled into some of our book choices for EV. Actually, when it comes to this trio I can’t even take credit for choosing them – E hunted down both of these offbeat books.

However, I can say that they’ve become great favorites of mine and constant requests from EV. That’s not just for their scare factor, but because they’re both apocryphal folk tales that include important lessons about bravery and independence.

The Dark, written by Lemony Snicket and illustrated by Jon Klassen 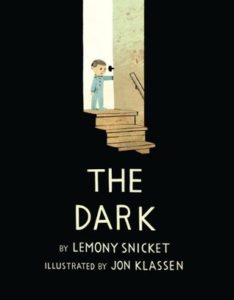 Gender Diversity: Male protagonist w/agender darkness
Ethnic Diversity: None; white protagonist
Challenging Language: None!
Themes to Discuss: darkness; being scared of the dark; exploring by yourself (positives and negatives)

This book was an early favorite of EV’s from just after her first birthday, and we read it so often that “Hi, Dark!” became two of her first five words.

The Dark is the story of Laszlo, a young boy who lives in a sprawling, creaky old house and who is afraid of the dark. He visits the dark in the doorway of the basement each day, saying, “Hi, dark,” thinking that perhaps if he visited it in his room it wouldn’t come to visit him in his own in the night. Otherwise, Laszlo tries to avoid the dark whenever he can, staying away from shadowy corners and quickly whisking himself to bed in the evenings and letting a nightlight illuminate his room while he sleeps. One night when his lightbulb burns out he has to make friends with the darkness, and it surprises him by being not nearly as scary as he thought it was.

Let me be clear – this book is potentially scary for little readers. Especially if you introduce it to an slightly older toddler who already has some mistrust of darkness, it’s going to positively terrify them that the dark might starting beckoning them in an actual voice and telling them to open drawers. Artist Jon Klassen, whose own sense of dark humor is on display in his Hat trilogy, illustrates the house as its own creepy character thanks to his angular art. He leaves plenty of dark spaces where things can swirl in the shadows. If you live in that sort of a dwelling, the potential for scariness only increases. 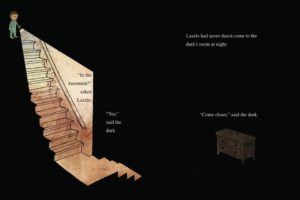 However, starting EV on the book so early had completely the opposite effect, because the book itself is about how the dark is no more or less malicious than any other definition of space in your world. The dark leads Laszlo past every shadowy spot in the house, and they’re all just rooms when she shines his flashlight on them.

Just ahead of the climax, author Lemony Snicket (of the Unfortunate Events series) delivers the powerful moral – that the dark exists in our world to create contrast, just like a creaky roof has kept the rain out for years and huge, cold windows let us see outside without letting the outside in. Everything in the world has its place, including the dark, and none of it is inherently frightening.

As a result of that message and many hundreds of readings of this book, EV would say, “Hi, dark!” every night when we turned out the light at bedtime. She has never needed a night light or showed any hesitation about charging into the dark hallway upstairs or upsettedness with open closet doors.

Pair that with the book’s simple, easy-to-read language that’s still fun for caregivers to narrate, and this is a book with legs. We don’t read it as much now as we did two years ago, but it’s never completely fallen out of our greatest hits list. I suspect it will remain there until EV grows sick of reading it herself. 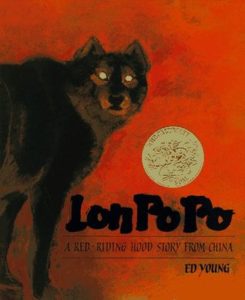 Lon Po Po is a Chinese fable that is part Red-Riding Hood and part Three Little Pigs, but scarier and more empowering than either tale.

It’s a creepy book full of lush, full-page painted illustrations and relatively dense text. It says a lot about E and I (and our oddball taste in books) that it has become our go-to gift for kids who need to read more, especially little white boys who might not have books where girls or kids of color get to be the heroes.

Lon Po Po starts as the reverse of Red Riding Hood – Shang, Tao, and Paotze stay behind while their mother visits grandmother’s house for her birthday. A watchful wolf notices that the three succulent little girls have been left unguarded, and cons his way into their house and bed pretending to be their grandmother, having missed her daughter on the path. Clever Shang catches on to his charade even as her sisters snuggle closer, and manages to convince the wolf the leave the house to enjoy the tender nuts of a gingko tree. Since the wolf cannot climb the tree himself, the girls hoist him in a basket but repeatedly feign fumbling and dropping him until he is killed by the fall.

I mentioned our tastes run slightly towards the macabre, right? 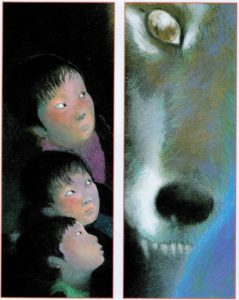 This isn’t going to be a great fit for all families. The kids are in considerably more peril than is presented in the typical sanitized fairy tale. The wolf is legitimately terrifying at points – some of the illustrations even freak me out. And, finally, there’s the little matter of the girls lying to wolf about the ginkgo nuts and then murdering him.

However, to me none of that is as terrifying as a world of inoffensive books about little white boys who solve everything or little girls whose hardest choice is what to wear to ballet class – both of which we’ve had bought for us by well-meaning people.

The wolf’s death is not graphic, making it less terrifying than aspects of Peter and the Wolf, and opens up discussing the idea of allegory. That pairs well with Shang’s relaying the myth of the tender gingko nut to the naive wolf.

This was another book that EV could not get enough of around the one year mark. Despite it being written in perfect English, there’s definitely a peculiar rhythm to its translated text. That kept me engaged through many early reads until it became one of my all-time favorites. There’s the chance to do fun voices for the wolf and the girls, and the text gives plenty of opportunities for emphasis and hamming it up.

Plus, it features a clever young Chinese girl that outwits an evil wolf! It’s one of the first books we had that featured a protagonist that was both a reflection of EV’s race and an aspiration for her self-reliance.

(My wolf voice is Cookie Monster imitating the Wicked Witch of the West. E finds it deeply unsettling.)

As with The Dark, I think this is a book you either have to start early before kids might think it’s scary or late enough that you can explain the context to them. But, there’s nothing inherently bad or offensive about this story – it’s the kind of challenge young listeners deserve as their tastes develop.