There, now you’re really going to trust my review!

One Earth man specially selected by alien to wield the power of green light to defend the universe I can take. Hell, I even dig that multiple men have borne the ring over the years.

It’s when you add to that all the various other Green Lanterns, and the home world, and the power battery, and the other colored Lanterns – and then make that one of the central mythologies of the DC Universe – that my interest wanes.

All of those credulity-stretching elements make Green Lantern just another employee – a foot solider in a galactic brigade with the same standard issue weapon as all his comrades. Heck, sometimes other Green Lanterns can even operate in the same sector! Even when Marvel has expanded their most popular lines of comics, they’ve never trivialized an original hero concept quite as much as that.

DC went all-in on Lanterns in their reboot, not knowing at the time they set the slate that the Ryan Reynolds summer blockbuster would tank. But, flop or not, this is the obvious title that new fans would be flocking to. Is it up to the task? 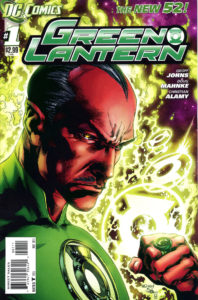 In a Line: “You’ve been off-planet too long, you’re beyond out-of-touch with everyday life – and people!”

#140char Review: Green Lantern #1 aimed at anyone BUT a new reader. It’s confusing. No denying Hal Jordon is magnetic to read; pity it’s >half about Sinestro

This debut issue could not be any more unfriendly to a new reader or non-DC collector reading all 52 books. And, friendliness aside, it’s not very good.

I’m not entirely sure what to say about it, because it was clearly not aimed at me. The plot feels like it picks up from some prior action that remains unnamed. We follow a seemingly destitute and clueless Hal Jordan (even though I don’t think he’s the latter) as he gets evicted and botches a date, and a seemingly newly-introduced and highly moral Sinestro (even though I’m pretty sure he’s neither) as he zips around in space, seemingly planning something awesome and not at all sinister.

That’s it. You have now read Green Lantern #1.

This book lacks just about all there is to lack in the plot and script department. Some caption boxes or thought bubbles would have been kind to orient the reader, or even to add a little texture to an absurdly fast read. There is no explanation of how the ring works, anywhere. There is no mention of the fact that last week we saw Guy Gardner as Earth’s GL in the present and Hal as a member of the Justice League five years in the past. We meet a council of blue-headed dwarves who apparently act as the DMV for the apparently noble green power rings, but they are asses and kill one of their own for disagreeing with them. And what is a Star Sapphire ring?

Uneven art does the issue no favors. Sinestro is both red and pink throughout. Backgrounds of tight shots are vague and empty, as in one shot of Hal and Carol at dinner with a blank wall behind them when it’s been established that one doesn’t exist in any direction. One non-red-robed blue-headed dwarf guy appears out of nowhere (why is his robe different?) only to be zapped a panel later? We see the detailed emptiness of the apartment Hal leaps into (pictured higher than his own window) only to be confronted by a half dozen people in it a page later (when it is clearly below his window).

We get zero context of why Sinestro was imprisoned, except that he turned dictator on his own planet (which was maybe a good thing?), only to then visit his planet and see a Sinestro Corps (?) of Yellow Lanterns (?) enslaving other pink/red people (?). Sinestro easily dispatches a yellow-ringed scout, even though I’m pretty sure yellow is what the green ring is weak to.

The one thing the issue did bother to establish is that the ring chooses the wearer, and it implies that there is one ring bearer per sector. The final page cliffhanger neatly refutes both points.

While this intercutting issue may have been a thrill for fans who know the Green Lantern mythology, it’s a toss-away for new adult readers and those with a vague understanding of GL’s background. It barely makes a lick of sense, and though Hal is sympathetic the only likeable character is Carol Fenris. It is a decent issue for younger readers, with its simplistic “plot,” no bad language, and limited violence.