From The Beginning: The Sandman

Tonight’s discussion wraps up the first arc of The Sandman (1989) with issues #5-8, which include three issues of Dream trying to out-maneuver the psychopathic Dr. Destiny to regain control of the Ruby, and the all-time classic introduction of Death.

In this run, Sandman quick delves from suspense in issue #5 down to the depths of horror in issue #6 before widening its scope in issues #7 and 8 – first to the expanse of Dream’s kingdom, and then to the very concept of death and existence.

Read on for my thoughts on each of these issues, or listen to our full discussion above. FanGirl and I have had an amazing time discussing Sandman’s first arc these past few weeks. We’re going to break from Sandman to refocus on Black Panther for the month of February, but we’ll happily return to Sandman if you demand it! END_OF_DOCUMENT_TOKEN_TO_BE_REPLACED

Tonight’s discussion is on The Sandman (1989) issues #2-4, which follow Dream as he returns to his kingdom of dreams and sets out on a quest to rediscover two of his three crucial tools – his pouch of sand and his helm.

What people often forget in talking about Sandman as a modern masterpiece is that it started out as very much a horror comic. It was also not so specifically disconnected from the DC Universe – we peek into Arkham in issue #2, hang out with Constantine in #3, and meet Etrigan in #4. 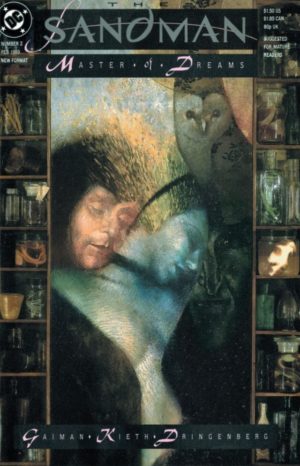 The Sandman (1989) #2 is Gaiman building a world, and dispensing a lot of information along the way, though some of it we will not recognize until much later. Sandman discovers his Cain and Abel, his librarian, and his decrepit castle – all of his dream time falling apart without him to hold it together.

Dream resolves to regain his three aspects and consults the trio of fates for them in a memorable sequence packed with literary references. His pouch of sand currently resides with Constantine, which he views as easier to acquire than his jewel (with the League) or his helmet (with a demon). Kieth’s art is a bit lumpy here, though the later recolor does it many favors. It’s our first time seeing Morpheus unbound, and he bears an uncanny resemblance to his creator.

The Sandman (1989) #3 is a low point of early Sandman for me – bringing in the caustic John Constantine and showing us Dream through his eyes. It feels much more like a Hellblazer issue than a Sandman issue.

Also, Kieth and Dringenberg’s art here goes a bit sour, just too inconsistent and droopy across a tale told primarily with a specific, human character (though there are some great panels, like the reveal of Constantine’s former lover).

I think it is in The Sandman (1989) #4 that Sandman became a classic. This issue is firmly rooted in Christian mythology, but also features an active, clever Dream increasing in his powers. It’s also quite boldly drawn by Kieth and Dridenberg, with the notable trio of demons – Beezlebub, a human with a fly’s head, Azazeal, a sort of Beholder, and Lucifer Morningstar, who is apparently a Space Oddity eta David Bowie.

Dream’s journey to the underworld is dire with a dash of humor beneath as Etrigan takes him through the suicide grove and past his own lost love, and later as Sandman engages in the most famous sort of wizard’s duel, that we all know from Sword In the Stone.

Tonight’s discussion focuses not only on Neil Gaiman’s The Sandman (1989) issue #1, but who Gaiman was as an author at the time. (Spoilers: he wasn’t very well-known!)

The Sandman (1988) #1 is not a perfect comic, but it’s an excellent one. The issue tracks Dream from his imprisonment in 1916 through his reemergence in 1988.

He does very little in those years, but the world changes around him even as some people sleep the entire time away and others never have a true dream. While Dream is imprisoned and they dream, his tools are stolen and dispersed around the world and his original captor passes away.

Gaiman’s script here is impossibly tight, filled with little details in every inch of narration. Sam Kieth’s art is memorable but a bit haggard at points – this is early in his career, still a few years before defining work on Ghost Rider or Maxx.

Some of Kieth’s long-faced, dropping facial work detracts a bit from the otherwise stellar issue – it’s probably not what you expected from Sandman based on the covers, later interiors, or Overture.

Today’s episode of Crushing Comics will be coming to you 12 hours later than usual, and it will be something very different than what I’ve been doing since the show debuted in November.

Tonight, I’ll be joined by my friend the illustrious FanGirl on a live broadcast where we will discuss and dissect Neil Gaiman’s classic series The Sandman, starting from the first issue! 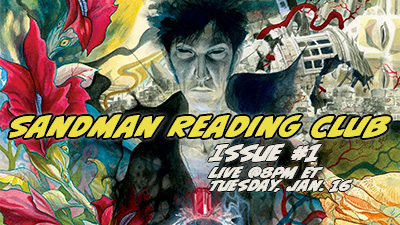