Rob Liefeld is a much-loathed comic artist who inexplicably still sells tens of thousands of books every time his meager talents grace an ongoing title.

After bumming around as a DC fill in artist in the mid-80s, Liefeld debuted on DC’s 1988 Hawk and Dove limited series before jumping ship to Marvel. He eventually landed on New Mutants, where he had a defining run in his transformation of the book into X-Force.

For all the hate Liefeld draws from any comic fan with good taste, his concept of the New Mutants growing militant and splitting from the X-Men was radical at the time, and still relevant (and referenced) (and re-used) today. That his two signature characters for Marvel – Cable and Deadpool – have each turned into consistent cash cows is a testament to his ability to tap into the collective unconscious to find something cool.

That is why DC’s assignment of him to Hawk & Dove rings so falsely. Any “because you demanded it” claim about returning him to his first beloved book is spurious and hollow. No one demanded this, and Liefeld’s bent towards muscles and hyper-violence would better suit a book in DC’s new Dark or Edge lines than a lame duck pair of heroes like these.

Of course, all those opinions were formed before reading the issue. Let’s see what it had in store for me. 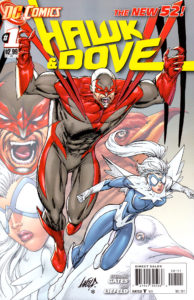 In a Line: “Dove, did we just lose cabin pressure!?”

140char Review: Hawk & Dove #1 borders on bad. For a DC newbie like me the C-list hero duo needs more of a compelling hook than Liefeld to keep me invested.

The plot here is straightforward enough. An evil “science terrorist” who is “a big hit on the internet” is striking fear into the nation, starting by crashing a plane of zombies into Washington DC.

Since the DC universe heroes are all wrapped up in their own fictional worlds, none of them especially care about the destruction of their nation’s capital, so it’s left to the barely capable resident team of Hawk and Dove to deal with the threat.

That’s what I get from this entire issue: “barely capable.” We get some narration to explain the duo’s powers – the embodiments of war and peace – but they seem so marginal that they should maybe be a rescue team on ski slopes rather than saving our nation from undead threats.

Then we get to watch the cocksure Hawk, actually a mimbo college dropout, get brow-beaten by his completely sensible father. This scene is like being blugeoned with a exposition bat that has flashback nails hammered into it. It does a great job of minimizing and villifying a title character by making him a strawman for his vastly more intelligent dad. I hope the dad’s always-right-ness is a big plot point, or else the scene is downright dumb.

I think the most laugh-out-loud moment for me was a zombie getting so angry at the constantly complaining Hawk that he broke out of his glass coffin and attacked in a fit of zombie rage.

Gates takes every chance to hammer Hawk’s bromantic pining for his former Dove, a dearly departed brother. What’s handled more deftly is the neglected Dove, who goes on a flying date with her unusual beau Deadman (who?) and hints that her coming upon the powers of peace wasn’t as random as Hawk thinks.

Then she dive-bombs a car screaming “Kaaiw!”

Credit where due, Liefeld bucks his typical trend of undefined backgrounds and wierdly tapered physiology. It’s a decent issue of art, aside from how he draws men’s costumed heads like basketballs with mouths.

That’s not to say the issue is without his typical goofs,like a random out of context shot of Dove out of costume, her inquisitive eyebrow arching on top of her bangs. She’s one of his generically romanticized women throughout, with her constantly parted lips seemingly unable to close. With her weirdly flat goggles she comes off as a lovely, feminine Spider-Man.

The final panel makes absolutely zero sense, as the way Liefeld draws the big reveal comes off as a coloring error.

Hawk and Dove is like a nostalgia title without the nostalgia, the absolute nadir of what DC has to offer, and why Marvel fans sneer at DC for being trivial.

What does the book have to offer? A generic pair of unsympathetic superheroes with a bland and inexplicable mythological origin. A generic science villain, literally labeled as “science terrorist,” with a generic plot to terrorize Washington by evoking 9/11 but with zombies.

And Rob Liefeld art. All class.

If that’s enough to get you to buy a comic book, please enjoy this to the utmost, and know that our taste in comics is vastly divergent.