Of a number of Marvel authors who pulled half-decade-or-longer runs on their titles in the 80s and 90s, Larry Hama’s run on Wolverine tends to be one that gets overlooked. Maybe that is because Hama wrote such a far-ranging, diverse take on Wolverine that saw him as both superhero and civilian, savage and strategic, and solo and surrounded by friends and allies.

While these initial years aren’t necessarily the best of that run, they might be the best looking thanks to increasingly flashy art from Marc Silvestri leading up to his departure to launch his own Cyberforce for Image Comics. 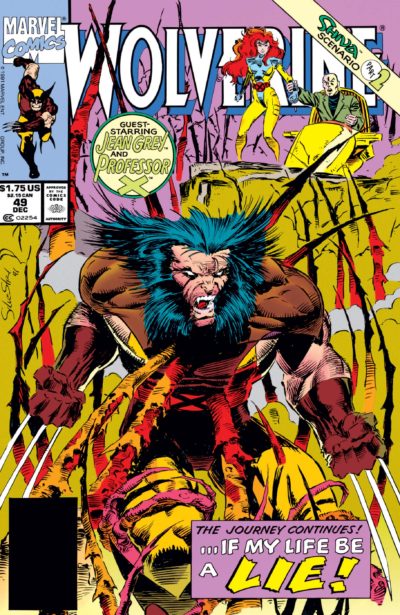 Wolverine Vol. 3 AKA Wolverine by Hama & Silvestri is tied as he #38 Most-Wanted Marvel Omnibus of 2017 on Tigereyes’s Secret Ballot. Visit the Marvel Masterworks Message Board to view the original posting of results by Tigereyes and visit Guide to Wolverine for details on how to collect every Wolverine issue, ever.

Probable Contents: Wolverine (1988) #31-57, along with at least the three OGNs, which stood in for annuals in this period – Wolverine: The Jungle Adventure, Wolverine: Bloodlust, and Wolverine: Rahne of Terra.

Since those issues have been recently recollected in paperback (and are just a modestly-sized book when combined), this volume could also include some or all of other contemporaneous Wolverine material including stories from Marvel Comics Presents #62-71, 85-92, & 97-100, Marvel Fanfare #54-55, and Marvel Collector’s Edition; plus any or all of Fantastic Four (1961) #347-349, Wolverine/Punisher #1-3, Spider-Man (1990) #8-12, and the original graphic novels Wolverine: Bloody Choices and Hearts of Darkness.

Creators: Issues of the main Wolverine series were written by Larry Hama with a single fill-in by Peter David.

The run was penciled by Marc Silvestri (with fill-ins by Larry Stroman and Jerry DeCaire and an arc by Andy Kubert) with Silvestri inked by Dan Green. The run was colored by Glynis Oliver, Mark Chiarello, and Steve Buccellato.

Can you read it right now? Yes! This omnibus will primarily be a collection of three paperbacks – Wolverine by Hama & Silvestri Vol. 1 and Vol. 2 and Weapon X Unbound. Unfortunately, only six issues of this run are on Marvel Unlimited at the moment.

There have always been two kinds of Wolverine runs – ones where he works adjacent to the X-Men being a superhero, and others where he’s entirely off on his own.

This initial two-year burst of Larry Hama’s lengthy run as writer is unusual because it contains both. The stories feel a little insubstantial today after 25 more years of Wolverine adventures and revelations, but some of the beats of these stories set the tone for Wolverine (and the shattered memories of his past) for years to come. END_OF_DOCUMENT_TOKEN_TO_BE_REPLACED