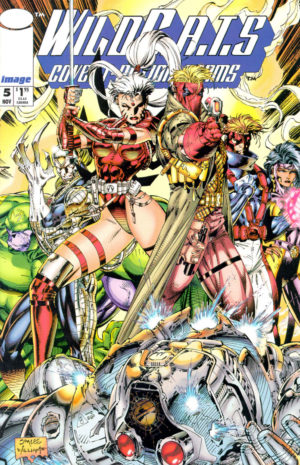 On the WildStorm side, over half a year had elapsed since the release of WildCATs #4, which was supposed to be the back half of WildCATs #3, which came out another three months prior.

Sure, Lee and company had filled the void with Trilogy and Special #1, but a big part of the draw of WildCATs was Lee himself and he had been absent from both affairs. That was surely a motivator to continue the numbering with #5 rather than risk confusion of a third WildCATs #1 issue solicited in the same six months.

(Although, in his introduction Lee says the continued numbering was mostly for “psychological reasons” of not having to do another #1 issue – if only Marvel 2016 would re-read that memo!)

Silvestri had his own schedule struggle with Top Cow’s Cyberforce. The initial four-issue mini-series took ten months to complete – a year if you tack on the subsequent #0 issue. Maybe starting a new series could also be good for psychological reasons – Cyberforce would maintain a roughly bi-monthly schedule for the remainder of Silvestri’s run on pencils.

But, enough about calendars – what about the comics?

I was in my comic-buying prime when Killer Instinct hit the stands, and there was nothing that looked anywhere near as good coming from any publisher. That’s not all down to Lee and Silvestri, with Scott Williams on inks for both. I give a huge amount of credit to colorist Joe Chiodo and his team of separators.

These colors are over 20 years old and I’d still say they’re as good as high-gloss superhero comics get. From the metallic reds on Zealot’s boots to the greenery in Velocity’s training session to the pink energy discharge in Spartan and Heatwave’s faceoff, they all pop off the page without the sickly skin-tone gradients of modern books. He makes the comics look like a million bucks.

Killer Instinct’s story is slightly less sparkling. The concept of a shared past between claw-handed Warblade and Ripclaw has legs, as does their damaged love triangle with the conniving psychic Misery. The mistaken identity plus some psychic misdirection that brings the teams into conflict is tried and true comics manipulation to get heroes to fight each other. 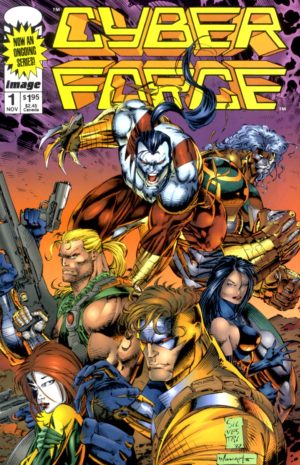 The crossover has a firm set-up across two prelude issues and its initial pair of WildCATs #6 and Cyberforce #2, but then the final two issues are a muddle of unevenly-paced fighting. Misery never develops as a character and just gets shriller and more conflicted, and Warblade’s super power seems to be more about coming back from a good thrashing than having sharp, pointy fingers.

Lee and Choi seem to have a better handle on their team at the start of this outing than they did before, including playing up smaller personal moments amidst the carnage. The prelude to the crossover in issue #5 is by far their best issue yet, while #6 sinks back to the typical kinetic action sans relationships and #7 barely hangs together. It’s incredible to think Choi was scripting such a sure title on Stormwatch while swinging so ham-handedly here.

With Voodoo taken off the field early on and Grifter and Zealot fading into the background, there’s not much team for Choi to write. Spartan is still a boy scout, Maul still has a single line about getting bigger that he delivers repeatedly, and Warblade takes center stage.

Warblade gains a bit of depth from the exercise, but you probably won’t come away feeling differently about him than you did at the start. There is such a thing as leaning on Wolverine too much (there’s one memo Marvel actually read), and giving Warblade and Ripclaw a shared SpecOps backstory when we’re getting the same thing for Grifter and Deathblow is a little much.

Silvestri (with co-scripter brother Eric) nails the double duty of a debut issue that’s also a crossover prelude. I’ll admit, I think there’s a certain tackiness to crossing over so early in the life of the title, but marketing is marketing. Despite the tale being framed with a personal story about Ripclaw that serves the crossover, we get introductions and context for everyone else on the team save for Impact. With a strong mini-series behind them, the Silvestris…

that looks so weird as plural, I think we’re going to go with the singular…

…The Silvestri have room to introduce everyone without dropping us into action.

The Silvestri also effortlessly handle a thankless flashback issue in #2 by intertwining Misery’s history with the team’s own defection from CyberData. It’s crafted in such a way that you could have missed WildCATs and the story would still make sense coming from #1. While none of their characters wind up with much time in the spotlight, they all get things to do that are well-matched to their motivations.

The inconsistencies of a speedy wrap-up in #3 can be forgiven, especially since they come with so many interesting little moments, like Velocity’s struggle with taking a life.

Want the play-by-play? Keep reading for a summary of these two teams going head to head. Here’s the schedule for the rest of this month’s WildStorm re-read – tomorrow we’ll read Stormwatch #6-8, which occurs simultaneous to this story.

Need the issues? This is the rare early WildStorm story that’s been collected in full, in a 2004 DC-issued TPB! Good luck finding it – on Amazon it goes for too-high prices, but it goes for cover on eBay. Or, you can pick up single issues – try eBay (Cyberforce & WildCATs) or Amazon (Cyberforce #1, 2, 3 & WildCATs #5, 6, 7, alt WildCATs #5, 6, 7). If you’re picking up singles of Cyberforce, be careful not to buy the preceding limited series by mistake!