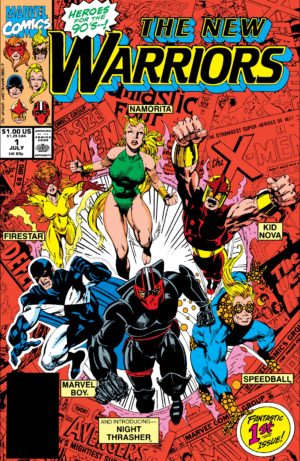 New Warriors was an early-90s creation of Marvel, who was witnessing the cresting popularity of New Mutants and realizing they never truly had their own analog to Teen Titans despite having plenty of young heroes to staff such a team. Tom DeFalco, then the writer/editor of Thor, decided it was a hole that needed filling and cobbled together a team to do just that in Thor #411-412 in 1989.

Aside from the recently neglected Richard Rider as Nova, none of the other characters could be described a notable … or even memorable. The most high-profile was probably Firestar, created for the 1981 cartoon Spider-Man and His Amazing Friends that was still seen widely in syndication, but introduced into comics just a year prior by Chris Claremont in the pages of Uncanny X-Men.

Speedball was was a human superball created by DeFalco for a Spider-Man annual and expanded by Roger Stern and the imitable Steve Ditko in his own maxi-series. Namorita was a longtime Sub-Mariner supporting character at a time when Namor was making a major comeback thanks to John Byrne.

Marvel Boy was a largely forgotten creation of the 1970s, a youngster introduced in The Defenders to explain away the future Guardians of the Galaxy leader. His big story was being abused for being a mutant.

To that mix, DeFalco added his own creation, Night Thrasher, as their leader. This made sense, since on their own none of them really showed the kind of initiative it would take to assemble a super-team. Night Thrasher was a sort of Batman-esque hero who assembled a team to fight crime – which makes their initiation facing off against Terrax and then Juggernaut seem a bit outsized.

The team lasted through 75 issues in its initial run, guided two-thirds of the way by Fabian Nicieza. The scripter of both X-Force and New Warriors, Nicieza was known for wringing terrific human drama out of his young superheroes. New Warriors worked for the same reason all of Marvel’s best team titles have – not because it was part of a franchise like Avengers or X-Men, but because the team really became a family along the way. 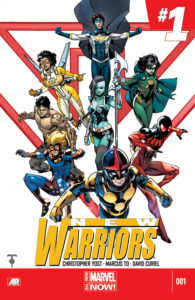 Unfortunately, “assembled to fight crime (but not really ever doing that” and “team as family” combine to make successful reboots a tough prospect. Multiple iterations of New Warriors try the “we stumbled onto a fight” approach and barely live out a year, while an “assembled by Night Thrasher” version lasted for two. The team is probably best known to modern readers for being the cause of Civil War (seriously)! The best return to form was from Christopher Yost in 2014, which found Justice and Speedball in mentor roles across a new team of young heroes that mirrored the original line-up. Unfortunately, it didn’t catch fire and lasted only the requisite year.

Given it’s unremarkable pedigree, why is a New Warriors Collecting Guide so important to Crushing Comics?

It’s the reboots. New Warriors is one of only remaining Marvel series previously uncovered by Crushing Comics that was both long-running and rebooted multiple times. With it now catalogued, there’s scant few Marvel titles that have run for longer than two years and through more than three incarnations I’ve yet to recap – and none with this many issues to their names.

Since New Warriors itself only constitutes 129 issues I took an extra step for this guide. Not only does it cover how to collect each of those issues, but it presents a unified reading order for every appearance of each of the founding members of The New Warriors (except for Nova, who has his own guide, so I added perennial teammates Rage and Silhouette.) Now you can follow the team through events like Infinity War and through times when they were splintered, as in the wake of Civil War.

Just how collected are those 129 issues of New Warriors? END_OF_DOCUMENT_TOKEN_TO_BE_REPLACED

This guide covers every series titled New Warriors, plus acts as a complete reading order for all of the major New Warriors characters: Night Thrasher, Namorita (AKA Kymaera), Firestar, Marvel Boy / Justice, Speedball (AKA Penance), Rage, and Silhouette. Nova is covered in his own guide. END_OF_DOCUMENT_TOKEN_TO_BE_REPLACED

A week into this countdown and accompanying annotation and we’ve finally reached the Top 20 Most-Wanted Marvel Omnibuses from the 2016 Secret Ballot by Tigereyes. I covered #25-21 in the last installment.

This installment includes two books of fan-favorite material, a long shot second volume to an orphaned first, the long-ignored origin of a hero who has two films to his name, and the highest-ranking vote from my own ballot! There’s a solid chance I would buy all five of these books.

If you have any extra information to add about the probable runs or opinions to share about the comics therein, please leave a comment! Even when it comes to X-Men, I don’t know (or remember!) everything about these books – and you might.

Do you own an oversized tome of your favorite character’s comic books? My Marvel Omnibus & Oversized Hardcover Guide is the most comprehensive tool on the web for tracking Marvel’s hugest releases – it features details on every oversize book, including a rundown of contents and if the volume is still readily available for purchase. END_OF_DOCUMENT_TOKEN_TO_BE_REPLACED