Last week on Drag Race, Katya crushed Pearl and Kennedy and went home anyway, ending the show. This week’s episode is just an overlong epilogue, like in Return of the King.

All four girls are clearly crushed about Katya’s exit, and Kennedy is maybe limping from her energetic lip sync? Ginger cries about it in her interview, while Kennedy takes all of half a second to congratulate Violet on her win before “NEXTing” her. Bold move coming from someone on the precipice of dismissal about two minutes prior. Pearl defends Violet, “Kennedy Davenport, your Hello Kitty was a Hell No, Kitty,” to which Kennedy responds, “This is not a sewing competition.”

Any time any of the girls utter the phrase, “this is not an XYZ competition,” you know they are high on their own fumes and headed for dismissal. It’s an everything competition – sewing, dancing, acting, being funny, being beautiful. It is clearly labelled as all of those things. The only time I have seen something on the show where it was straight up not that kind of competition is when the girls had to play basketball in All Stars, and they all thought that was hilarious.

Violet, appropriately, comes for Kennedy and Ginger and their hesitance to sew, and Ginger says, “I’m not a seamstress, I don’t know how to sew, but no other bitch on this show has been able to sing like me or act like me.”

Did she miss the season with Jinx? Or the one with Courtney and Adore? Or the one with Latrice and Willam? The past three seasons have been lousy with amazing singers and actors. Did she see Darienne’s spectacular meltdown in the acting finale? Hell, even Sharon and Phi Phi turned out to be good singers when they were paired against each other. I can concede that Ginger ranks in the top group of actors on the show of all time alongside Jinx, but it’s not like she’s the obvious theatrical all-time champion. It’s just more huffing her own fumes. END_OF_DOCUMENT_TOKEN_TO_BE_REPLACED

Previously on RuPaul’s Drag Race: we had another busted runway concept and the somewhat unfair dismissal of Trixie.

Ginger is appropriately both sad about Trixie and congratulatory about Katya and Violet, but then brings up the elephant in the room – now that Miss Fame is gone, Violet is the only girl who has yet to lip sync!

Ginger claims she “just wants to see it,” but it’s hard not to react as if someone is saying they want to see you sent home. Violet fires back, “Ginger, how does it feel to have a weakness? I feel like you’ve been really strong this entire competition – but I felt that I really got to see this week.”

Ginger says she does all her crying after they head home from the work room, and then comes back with her game face on – which Pearl and Kennedy agree to. Nice show of solidarity and strategy there. Ginger does a lot of whining in the work room, but she doesn’t let us see her truly upset.

This was the best intro chat of the season. I think we’re going to see some great interactions in this final five that we probably wouldn’t have had if some of my other favorites like Trixie and Max made it this far. Plus, much as with last season, there are really no under-accomplishing villains – even Pearl on the weaker side has fought for her spot. END_OF_DOCUMENT_TOKEN_TO_BE_REPLACED

Last week on drag race: the queens had to do their best Divine-inspired performances for John Waters, and Fame just wasn’t the right kind of terrible – which meant Trixie is still in the competition and the ranks got shuffled.

The girls are all giggles as they head back into the workroom fresh from the runway and Miss Fame’s elimination. Violet seems to have grown some genuine, Real Girl TM emotions and will miss Miss Fame, and Katya’s eyes tell the same story. Violet unintentionally calls back to the best Untucked of last season, interviewing, “Fame probably felt really attacked.”

Well, we all know how that can go, right Laganja?

Violet also feels how close her brush with the bottom was as the only remaining non-lip-syncing contestant – which maybe leads Katya to declare war on her? It’d be smart; Violet is the Top-3-bound lady who Katya is most likely to knock off head-to-head.

The rest of the queens seem to be over the elimination (and Miss Fame, in general), which isn’t a big surprise. Despite not being a villain in the slightest, Fame had a lot to say and never quite put her talent where her mouth was. Pearl, particularly, takes exception with Fame calling her out in the “Who should go?” quiz in front of the judges panel. She claims that the ire will only inspire her to greater heights.

The ladies return to their stations to discover Miss Fame left them all brief individual notes, because she is that thoughtful. Everyone is rude about it (Kennedy slightly less so, maybe because her note was so glowing, calling her a “class act”), because outta sight outta mind! They don’t want to be reminded of the girl they just left behind the day before. END_OF_DOCUMENT_TOKEN_TO_BE_REPLACED

Previously on Drag Race: Max fell impressively from grace while Ginger and Kennedy locked up their top spots with a shared Snatch Game win.

The girls return to the room tired and seemingly bummed about Max, but neither emotion can top their ennui about the idea of a dismissed queen returning. Ginger wants Jasmine back (NO), which Fame quickly shoots down, proposing Kandy Ho. (Katya: “She can’t lip sync four times.”)

Katya interviews: “How can I say this delicately? I DON’T WANT ANYONE ELSE TO COME BACK. Nobody wants another bitch to come back! Nice to know you. You’re beautiful. Stay home.”

The girls enter the room expecting to be greeted by a returned queen or, preferably, a large gift box that they could set aflame. No one has positive feelings about the situation. Ginger suggests they all go on strike until the queen is removed and begins singing a protest song, which Violet finds hilarious.

RuPaul’s video message is a confusing mix of references to Wizard of Oz, bus-throwing, and hitchhiking – but it’s clear that the returned queen is meant to mess with everyone’s plans. Fame turns into a Katya-like cartoon character as she has an imaginary fist-fight with Ru.

Ru enters. “Are you decent? Because we’ve got company!” Everyone groans until Latrice MFigg Royale enters in her Tuckahoe County Prison uniform! The queens are more excited for Latrice than they’ve been for any actual star so far this season, because: LATRICE. END_OF_DOCUMENT_TOKEN_TO_BE_REPLACED 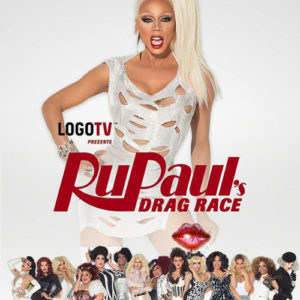 Previously on Drag Race: More acting challenges managed to do in Kandy Ho rather than Jaidynn or Fame.

No one seems terribly distraught about Kandy leaving, though even Katya as the challenge winner looks utterly exhausted. Jaidynn swears up and down she will not be lip syncing again, while Max concedes she’ll do one non-gray look and then head right back to her wheelhouse. Violet fires back, “Bitch, if they gave me specifics I would fucking do it.”

And, she’s right – they love Max and want to see one little thing. Just do the damn thing, Max. Kennedy agrees, in interview, in her shady way. Violet has some shade to throw back! “I’m over Kennedy missing the mark with these looks. She doesn’t look dead. She doesn’t look like a woman!” Pearl adds, “Kennedy looks like whaaaaat?” Back to Violet, “She looks like Tony The Tiger on crack.”

While they speak, Violet stands around looking drop dead gorgeous, neglecting to let out her waist despite ample opportunity. That’s a long day to spend cinched!

Katya: “It’s a new day, it’s down to eight girls. My game plan going forward is to kill a few of the girls to make it to the top.”

Katya can never be eliminated because I don’t know what I would do without her interview segments. She’s approaching Alyssa levels of interview insanity. END_OF_DOCUMENT_TOKEN_TO_BE_REPLACED