I have this theory about how Philadelphia is immune to disaster.

Stick with me for a minute.

No seismic activity. Relatively far away from potential tidal waves and protected from hurricanes. We’re not known for forest fires or mudslides, and despite our utter flatness occasional floods are minor. It doesn’t get too oppressively hot and the biggest challenge in our snow storms is waiting for the city to send plows. We’re relatively drought- and famine-proof, as modernized cities go, and NYC and DC are preferable targets for terrorists and rogue nuclear missiles.

Really, the closest we come to city-wide disaster is one of our sports teams winning a championship. Otherwise, short of OCD Godzilla bursting free from my chest to tramp around Center City, it’s a pretty safe place to live.

So, of course we move out of the center of the city to the fringes and within the first week there’s a tornado on our block.

That is only vaguely an exaggeration. It wasn’t officially a tornado, and it was actually on pretty much every block adjacent to our new one while leaving us untouched.

I witnessed a portion of the storm from my office window, and it looked sufficiently deadly – I saw it blowing things clear off the gated roof of an adjacent building before my view was reduced to a foggy blackout. However, when I left, Center City looked no worse for the wear. 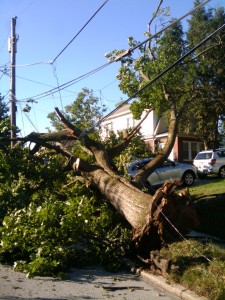 A huge tree on the next block, completely uprooted.

My new neighborhood was a different story. My bus stopped a mile short of our house in traffic snarled by dark traffic lights.

I disembarked and began a muggy hike back to my home. About a mile out from our house I started to see down tree branches. Then it was downed tree limbs, taking some power lines with them.

By the time I was a block away it was entire trees – trunk, roots, and all, upended ass over end to be splayed rudely across well-groomed lawns. Entire blocks of entire trees, the entire landscape denuded by mother nature.

To say I was nervous when I approached our house would be an understatement. I was obsessing over the huge tri-trunked tree that shades our patio, and how any of its trio of arms could go crashing through the roof to destroy my collection of guitars and recording equipment, now located in one conveniently destructible place.

My heart sank when I turned onto my street a block below our house, only to find it completely blocked off by the arboreal carnage. 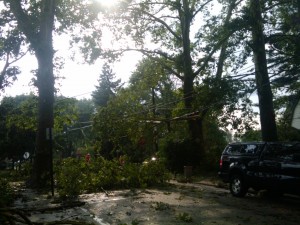 A barricade of branches and power lines.

Having lived in the absence of disaster for nearly three decades, to me the sight was fantastical – as if my block had experienced some sort of wizarding dual, the debris glinting with hints of magic in the afternoon sun.

I navigated around it with great care, emerging on the other side to regard a pristine, untouched block stretching beyond the mess.

I raced the remaining distance to my house but, like the rest of our block, it was unmolested – no downed trees, no holes in our windows from golf-ball-sized hail. The only evidence of a storm my neighbor described as sounding “like a freight train passing by” was a dusting of shredded leaves on our lawn and our power, out.

We dodged a bullet – a house on the next block had its gutters shredded by downed trees, while a few streets over a massive branch decimated the windows of an SUV. A co-worker lost all of the power lines to his house to trees.

Us, we just lost our innocence – no longer protected from disaster by Philly’s impregnable grid of row homes, and now inclined to worry about the state of our house after every storm.

The last few days in Philadelphia have started and ended covered in mist. No, not fog, but mist – alive, creeping ever downward until its fingers brush against the asphalt and then sliding out in every direction.

If i liked Hamlet better i might recite something.

Instead i have marveled in my city, so much of it shrouded from view, a place where everything is usually so familiar made novel and mysterious. Each morning the windows behind my cube reveal nothing but white, the buildings just across the street rendered invisible by the opacity of the air that surrounds them. As I leave, the yellow clock of city hall welcomes me to the night, floating in the air like a low, full moon.

Every time I think that I have been here in one place for too long the city finds some way to excite me.

I once theorized that the commonality of an experience makes it seem less real, as if the more people we’re aware of sharing it with the less intense it becomes.

Since weather is a universally experienced phenomenon, maybe we’re always talking about it to make sure it’s really real?

December 1st in Philadelphia was balmy – is balmy still. It’s a beautiful 71 degrees outside, with a warm breeze whipping up the streets as though we’re in for a tropical storm. The prognosticators at the Weather Channel claim we’ll dip nearly 40 degrees overnight.

The air seemed to insist that i walk home rather than take the bus so I could soak in the strange summery atmosphere. Because, we take delight in unreal weather – the hottest hots, and the coldest colds, the most rain or snow – so that we can brag about feeling it later.

“It was as warm as the Fourth of July on the first of December!” we exclaim, continuing, “of course, you would have no idea what that feels like.”

I want to drag my sleeping bag out into our tiny, cement back yard and sleep under stars, taking time-lapse photography and making extensive notes as Philadelphia makes its slow descent into winter, watching as my city fades from peculiar unique reality to a perfunctory seasonal fiction.

See what happens? I get too much facial hair and then I don’t blog for a month because I’m too busy sneaking around everywhere incognito.

Yesterday I missed work not because I was too sick to go in, but because I had a headache. That’s the sort of ridiculous SEL reason I usually mock my middle-aged co-workers about but, let me assure you, this was a seriously bad noise-hurts, light-hurts, moving-hurts, breathing-hurts headache. Initially I thought that I could take my typical 4x suggested dose of Ibprofin and merrily skip to work a mere hour late. Boy was I wrong.

(I should point out that I have to take 4x the suggested dose because the suggested dose really doesn’t register at all to me. I could just as easily eat one m&m to try to solve my aches and pains. It could also have to do with the fact that I spent my entire childhood surrounded by women who would take, like 1600mg of Motrin and a glass of wine for cramps, which might also explain why I always found Karen Walker to be so lovably familiar.)

Today was blustery and spring-like, and I headed out for work. I’m certainly not using two SEL days for a headache, was my thinking. Again, boy was I wrong. (Sense a trend?) I could not focus on the screen, could not carry a work-related conversation for longer than two minutes, and was generally a Motrin-gobbling miserable excuse for a human being.

So, that’s life in my world, at the moment – headache that makes me reconsider existence, leading to major grumpiness.

I found myself rather transfixed by the streaming water and its leaves, urgently spinning down past the bus stop to the tiny curbside river that ushered them down the street, to the corner and it’s sewer drain. Oh leaves, I thought, you spend all that time fluttering in the wind and now you’ve been charmed by those rushing waters, seeming so out of place on an awful gray street corner, never knowing you probably won’t see the sky again.

Some days I like being on my tree, but some days I feel as though I’d gladly fall into any rainy stream that would take me.