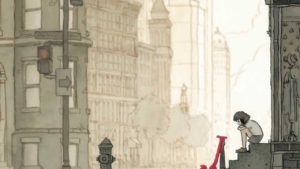 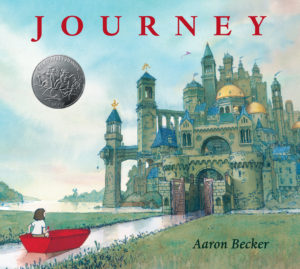 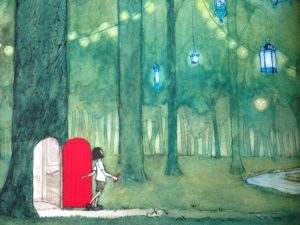 Journey would already be a surefire recommendation if it stood alone, but Aaron Becker extended the story into two additional books – Quest and Return – that are somehow even more captivating than Journey itself! 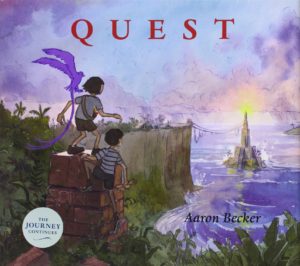 Quest finds the girl and boy accosted in a real world park by a king dressed in yellow, who presses an empty bandolier and a rainbow map before being pulled back through a door to the fantasy world by the guards from the first book. The map depicts four other colors of chalk and the places they can be found. The girl and boy re-enter the world and give the guards a merry chase through the land as they collect the full rainbow of chalk and free the king.

Return begins similarly to Journey – the girl decides to travel to her secret world when her father doesn’t play with her. This time, her father follows her to her room and discovers the open door and the fantastical world on the other side. He finds the girl, boy, and king meeting together, but they’re interrupted with the guards and a machine that can vacuum up their colorful creations – and their chalk! A chase ensues, in which the girl’s father sees all the ingenious ways she’s learned how to use the chalk. However, they have to work together to figure out how to protect the girl’s red chalk from capture and free the king and the boy from the grips of the guards.

There is so much to love in both books, but I’ll simply highlight my favorite element of each.

I love that Quest features an equally capable girl and boy on a wild, fantastical adventure. The added bonus is that the absence of dialog means you can read the pair’s cooperation in whatever manner suits your own little one.

The book gives no indications to their relationship aside from their cooperation.

My main telling has the boy as much more tentative and unsure than the girl to emphasize how strong encouragement makes her a good leader and friend. However, there are other times I put them on more equal footing, or have them bicker amusingly. Sometimes the girl is cautious, while others she is headstrong and needs to be reeled back in by the boy.

Each person I’ve watched read it with EV gives the pair their own balance. The only thing you cannot really exclude is that the girl is clearly the protagonist of the series.

Return is The Empire Strikes Back of the trilogy, because the introduction of the father to the story includes several potentially mind-blowing revelations that fundamentally change the story depending on how much you fixate on the details of the book.

I don’t want to “spoil” your read by giving you all of our house theories, but here are a few things to notice (which should also give you a good idea of how you can engage 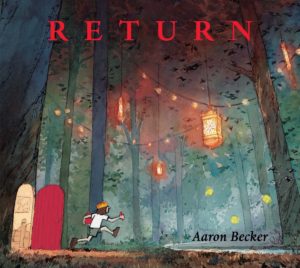 your little one in the illustations of all three books).

If you read between the lines in those questions, you can see that there is an intriguing meta-narrative about the father that might change the meaning of the prior books depending on your interpretation. This is just one example of how the books open themselves up to growing in the retelling.

When I evaluate if a purchase was worthwhile, I do so on a matrix of dollars invested vs. time enjoyed vs. intensity of enjoyment. If I apply that matrix to the Journey books they are a relatively flat shape of nearly infinity length and width – meaning, they weren’t that expensive but there is no end to the time and amount of enjoyment EV gets from them. She walks around the house with them clutched tightly to her little chest, and will sit for an hour retelling the stories to her stuffed animals and toys.

My sole critique of Journey is that Becker missed an easy opportunity to diversify his cast in making the little boy anything other than white. We don’t meet any of his relatives (OR DO WE?), so his whiteness doesn’t create consistency with any other element of the book. Having him be a kid of color who makes fast friends with the girl and joins in her adventure would only add to the wordless power of these books in displaying friendship, loyalty, and cooperation.

The Journey Trilogy is breathtaking modern classic of fantasy from Aaron Becker that can captivate kids from age 2 to 102. All it takes to enjoy them is an imagination and a willingness to get lost in the beautiful details of his fantasy world. If your toddler isn’t quite enough for it yet, she’ll get there.