You are here: Home / consume / comic books / From The Beginning: Reading The Wildstorm Universe

That makes this the perfect time to re-read the original WildStorm Universe! I’ll be doing that every day this month for my first ever “From The Beginning” comic read-along event – here’s the schedule, if you’d like to join in!

Not sure what WildStorm is or why this is such a great time to re-read it? I’ve got the scoop for you right here in my first ever edited video project for CK (plus, below in text).

WildStorm was Jim Lee’s imprint amongst the Image founders and WildC.A.T.s and StormWatch were his pair of flagship titles. WildC.A.T.s began in August 1992, literally in the same month as Jim Lee exited his universally acclaimed run on X-Men. 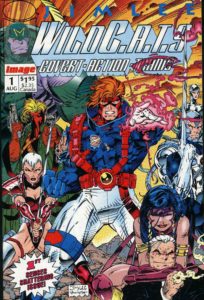 Lee was one of six Image founders. The other 1992 launches were:

While I read a few books from each launch, it was Lee’s that stuck – probably because they were a therapeutic alternative to X-Men.

As luck would have it, news of the Warren Ellis relaunch coincided with me grabbing the last few books I need to do a complete WildStorm Reading Order binding project that includes literally every in-universe book they released from 1992 to the reboot of their continuity in 2006 (plus some TopCow, with whom WildStorm would frequently intersect).

I had been despairing about when I’d have the time or inclination to read all of those books to prep them for binding, but the announcement gave me a perfect excuse! Reading the first three years of WildStorm will be a great refresher on Lee’s original characters and concepts, plus it will give me the chance to get my comic binding maps in order.