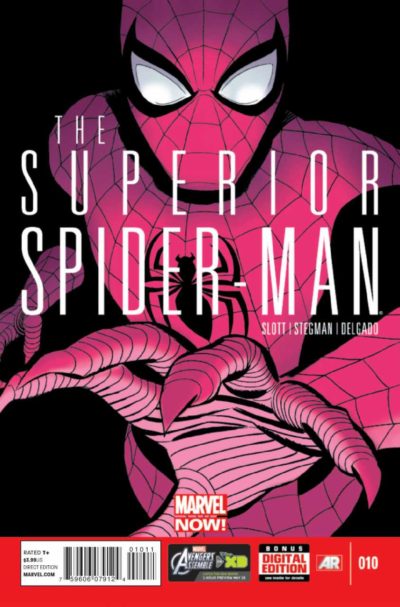 To explain the why and how of that will involve some major spoilers. 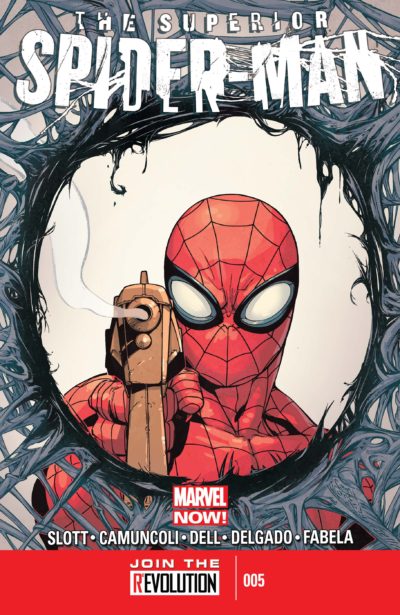 As Amazing Spider-Man approached issue #700, writer Dan Slott brought a long-simmering plot to the fore. Doctor Octopus lie dying in in prison, but before he was captured he deployed an infestation of Octobots that he could control mentally. Octopus use one lone remaining golden Octobot to swap consciousnesses with Peter Parker!

Now Doc Ock was living the heroic life in Spider-Man’s body while the heroic Peter Parker now found himself trapped the decrepit, imprisoned body of Doctor Octopus. Parker makes a valiant effort to break out and do some super-science to reverse the brain swap, but in Amazing Spider-Man #700 he comes up just short.

Doc Ock’s body dies, apparently with Parker’s psyche dying along with it – leaving Doctor Octopus behind to live the dual lives of Peter Parker and Spider-Man!

This Spider-Ock – SpOck for short – wasn’t hell-bent on villainy. Instead, his main goal was to drive this young, handsome, super-powered Peter Parker body to the height of its potential both as a man and as a hero. He declares he will become The Superior Spider-Man. No more bouncing from job to job or playing second-fiddle to other, lesser scientists. No more being the put-upon, beaten-up hero distracted by every mugging and D-list costumed bank-robber.

That was the status quo into which the Superior Spider-Man launched in late 2012, ahead of the Marvel Now relaunch by a few months.

It was a wicked delight. Part of the delight is that you really didn’t have to be keeping up with Spider-Man to appreciate the story. Even if you only knew Spider-Man from films and cartoons, you could appreciate that SpOck really was better at being Peter Parker than Parker himself had been.

That made it hard to root against him, especially because he really wasn’t doing anything all that bad. Sure, he was a bit hyper-violent, and he made a bit of a mess of Peter’s personal relationships. He was also keeping criminals off the streets, finally finishing his doctorate, taking good care of Aunt May, and maintaining a real, adult relationship (with a great new character, Anna Maria Marconi).

Slott and his frequent collaborator Christos Gage write a thrilling page-turner from start to end that has no absolutely no filler to speak of. The art rotation of Camuncoli, Stegman, and Ramos are strong. 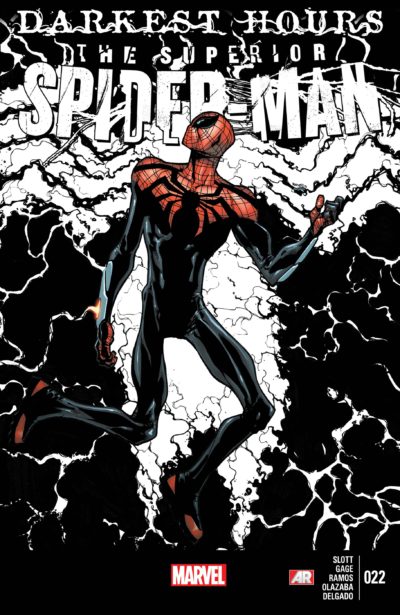 I’m generally not a fan of Ramos’s exaggerated bodies, but here he distends Spider-Man with purpose – distorting his frame into something more and more inhuman as SpOck’s plans spiral out of control.

By the time a glimmer of a hope emerges that the real Peter Parker might finally retake control of his own body, I guarantee you’ll be torn about wanting to see that happen. Even when using his villainous smarts for the common good, SpOck is still driven by his selfishness – and that becomes his undoing.

As it turns out, part of why Peter Parker’s life is always so frustratingly askew is because he always puts his altruism first, and that’s not always compatible with winning.

Still, maybe the real Parker could learn something about thinking bigger from his body’s temporary custodian.

With the three hardcovers that contain this run hitting the three-year mark in 2018, they might be old enough to warrant heading back to press with this run – which surely deserves evergreen status as much as anything else Marvel has done from 2013 forward.

No matter how Marvel chooses to attack collecting Slott’s extensive Spider-Man run, there’s no getting around this being a single, self-contained volume. That means there’s zero risk to them collecting it prior to the preceding “Big Time” run and the following Spider-Verse run-up and Worldwide.

Would I recommend buying it? 100% yes! This is a fantastic story that’s accessible to any reader.