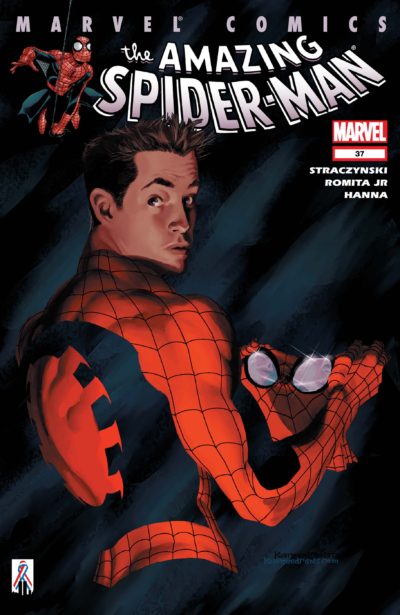 Doesn’t sound like a high, right? Well, the high was from Ultimate Spider-Man, the mega-hit launched by Brian Bendis at the end of 2000 that recast a teen Peter Parker into the modern day. 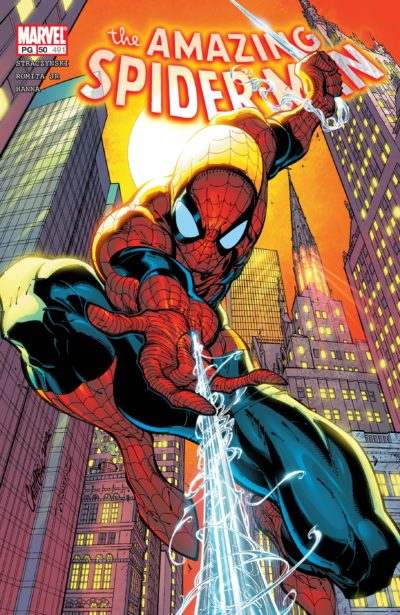 With JMS taking over Amazing eight months into that experiment (and likely hired just as its buzz was starting to be realized), he rightly zigged where Ultimate zagged – he leaned hard into an adult Parker, his rocky marriage, and the lengthy legacy of his Spider powers.

I’m not going to outright trash anyone’s votes, because everyone loves their favorite comics for their own good reasons, but I’m going to level with you right now: this run is close to my bottom choice among Spider-books for omnibus treatment.

First, the run is solely drawn by John Romita, Jr. through issue #508. Modern JRJR artwork is … “not beloved” is a kind way to put it.

Despite bearing some of my favorite Spider-man covers, the interiors of these issues aren’t going to benefit from super-sizing in an omnibus. Some are indefensibly bad. Like, kid in your high school math class doodling in the margins of his notebook bad. Proportions all whacked. No sense of motion.

Sorry, was that not kind?

He introduces mystical motivations for radioactive spiders, animal totems, old dudes who also have Spider-powers, and cross-dimensional vampires – and that doesn’t even touch the back half of this run, where Green Goblin gets Gwen Stacey pregnant and she gives birth to hyper-fast aging twins before dying, and which ends in the dissolution of  Peter & Mary Jane’s marriage by the devil himself.

No, I did not make any of that up. Oh, and he had Doctor Doom cry over an act of terrorism.

In all honesty, it’s not all bad. The aforementioned old dude, Ezekiel, is the rare father-figure that really works well in a Spider-Man story – we get him in small, continuous doses, and he’s the one holding information back from Peter Parker, rather than the other way around. Because of how he holds back information, the information seems more interesting than it is purely as plot.

(If you loved everything about Spider-Verse, then you can think of this as “Prelude to Spider-Verse.”) 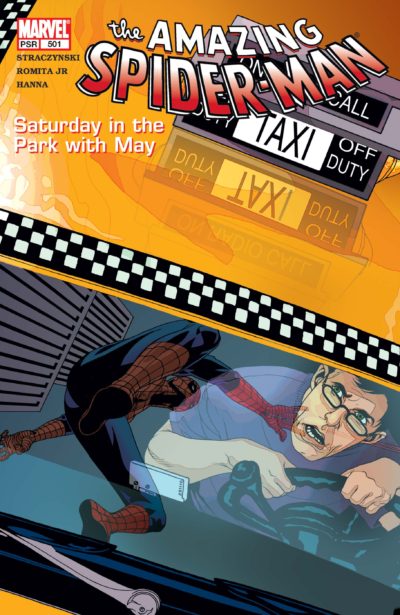 Getting Spider-Man away from the Bugle to be a high school science teacher is a brilliant move, letting him be a role-model in a way that had fallen out-of-favor and connecting him to smaller stories. And, this is the most adult I think we ever get to see Peter and MJ’s relationship. Not just that it has its moments of sexiness, but that Mary Jane is a full-developed character with agency that sometimes leads her to disagree with Peter.

Plus, this was a Peter Parker with nuance. I’m not quite sure how to explain it, but JMS inhabited his Parker with a decidedly human inner-monologue that was more than just quips. JMS’s Spider-Man felt like a real, grounded human being as much as Bendis’s twin take on the teenage Parker felt modern and current.

On the whole I guess I have to admit that JMS’s Spider-Man isn’t all bad. While some of the stories still make me cringe, it’s more cohesive than what came directly before, and it was essential in setting up all that followed.

I think if this was going to happen it would have been to accompany Spider-Verse. Brand New Day (on the poll at #51) is the surer bet for a modern Spider-Man run broken into multiple omnibus volumes.

Would I recommend buying it? Can you guess my answer?

In all honesty, I can see the allure of wrapping this run into an omnibus because it’s by a consistent creative team, but there are many, many Spider-runs more deserving of oversized treatment both for their quality and their notoriety.