I’m back with a guide for Patrons of Crushing Krisis that has been thwarting my efforts to complete it for over two years! Well, I’m happy to report that today I have finally defeated… The Definitive Legion of Super-Heroes Guide! 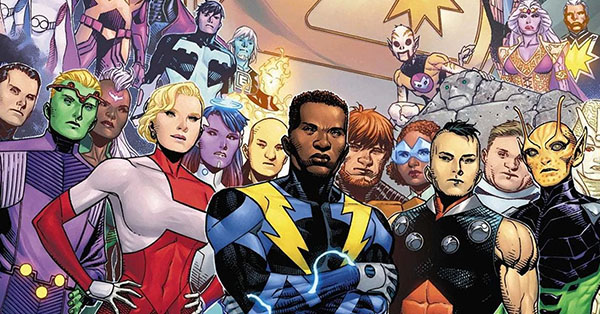 [Note: This guide is now live for ALL readers of Crushing Krisis thanks to the support of my Patrons!] 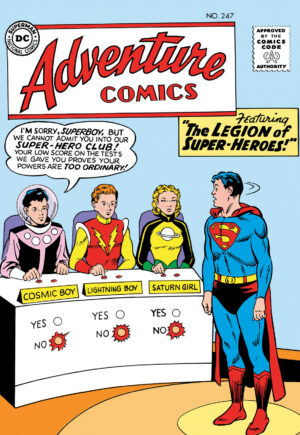 I quickly realized I was in over my head. I might be an X-Men X-Pert, but when it comes to the 30th and 31st Centuries of DC Comics continuity I am a complete neophyte. I quickly pinged several Legion mega-fans, who gave me wonderful advice. In fact, in one instance I actually hired one of them to help me with an outline of the many different eras of LOSH because I was so overwhelmed!

Through each of those changes, I kept pecking away at the Legion guide in my spare moments. Was it really as complicated as I was making it out to be? Actually, it seemed like every time I worked on it, it just got more complicated and even longer!

Finally, over the past two months I began to wrangle it into a discernible shape. And, having spent many hours and thousands of words on The Legion of Super-Heroes, I am now going to summarize the entire franchise for you as simply as someone who has only read about 20 LOSH comics can…

The Legion of Super-Heroes is like an intergalactic superhero youth congress slash community police force of the 30th Century. They’re like Captain Planet mashed up with the Green Lantern Corps, but with the massive cast and soap opera drama of the entire X-Men franchise all rolled into one or two books at a time.

In the original, Pre-Crisis DC Universe, three heroes from the 30th century Legion travelled back to the past to meet their personal hero, Superboy (who at the time was literally kid Clark Kent). Then, they violated the prime directive in a major way by bringing kid Clark back to their future, where he joined the Legion.

After Crisis on Infinite Earths, that origin became awkward to reconcile with John Byrne’s post-Crisis Superman reboot. To help distract everyone, DC killed the Legion’s Superboy and then fast-forwarded the plot to “Five Years Later” in 1989.

By the time Zero Hour rolled around in 1994, DC editors realized that the accumulated continuity of LOSH plus aging everyone up made their franchise increasingly dark and decreasingly popular. With the excuse that the present day ripples in continuity created by Zero Hour became a tidal-wave by the time they hit the 30th Century, DC kicked off “Reboot Continuity” in the middle of their two ongoing LOSH series. This new status quo somewhat resembled the teenaged LOSH of the mid-80s, but with Conner Kent’s Superboy as a member rather than literal Clark-as-Superboy (who no longer existed as such).

Sales were dropping by the mid 00’s despite a beloved multi-title run from Abnett & Lanning.  DC decided to wipe the slate completely clean and restart LOSH as if no Legion comics had existed previously. This was “Threeboot Continuity.” It was originally meant to keep to itself in the 30th Century, but within a year it added present-day Supergirl to the cast.

When Final Crisis arrived 2008-2009, DC wanted to get back to the original LOSH continuity (probably because their heavy-hitter writers were the right age to remember it fondly). But, no one wanted to continue the more-adult “Five Years Later” version. Instead, they had all three versions of the Legion meet up during the event, and afterward they continued to “Preboot Continuity.” Basically, it filled in the gap before “Five Years Later” (not that many modern fans who hadn’t been buying comics in 1985 even remembered that). This continued into New 52, at which point the franchise finally sputtered out in 2013 after over 40 years of nearly-continuous publication.

The Legion all but disappeared from DC continuity, aside from appearances in Convergence and occasional Easter Eggs.

Then, during the Rebirth Era, Brian Michael Bendis literally re-wrote the original Legion of Super-Heroes origin story where heroes of the 30th century Legion travelled back to the past to meet their hero, Superboy. Only, this version of Superboy is Clark Kent’s son Jon.

And now you understand the sordid publication history of the Legion of Super-Heroes about as well as I do!

Diving into LOSH as a new reader is incredibly intimidating. There’s so many characters and so much continuity, and prior to the past few years very little of the critical 80s and 90s material was available physically or digitally.

Thanks to Bendis revitalizing the franchise, we now have a bevy of Legion omnibuses and hardcovers to fill in critical 80s and 90s material that made the book so revered. And, it feels as though we finally have enough hindsight on each of the three major past eras of Legion of Super-Heroes to appreciate their positive qualities without having to choose a favorite.