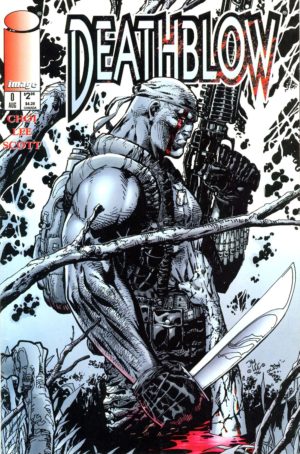 Deathblow was the third book in Jim Lee’s trio of WildStorm launch titles, introducing his own analog to The Punisher – one of his famous runs as a penciller at Marvel in the late 80s.

(The character was first introduced in a brief tale in the anthology Darker Image, although that story doesn’t track directly to the beginning of the series and would  be completed in a #0 issue.)

Deathblow would later coalesce into a remarkably gripping story, but at its introduction the book was a mere footnote to WildStorm’s pair of flagship teams. That’s due to a staggered publishing schedule and four short, disconnected issues that don’t feel like they had Lee and scripter Brandon Choi’s full focus.

That’s puzzling, as Deathblow begins with the most traditional opening arc of all three of the initial WildStorm titles. We get time to linger on our anti-hero and his relationships before being plunged into action. Why isn’t it satisfying?

At this early stage of their independence, Lee and Choi didn’t know how to deliver information while keeping a story in motion. As a result, the first three chapters of the story feel like prologue, while the brief action sequence and bizarre twist in the fourth hardly pays off all the set-up.

While the story was a muddle, Deathblow remains notable as a rare example of Jim Lee inking himself. The style is striking. It retains all of the dynamics of Lee’s typical work, but drapes them in shadows and negative space. It’s a much more dark, rough-hewn look than his typically sharp pencils. It almost suggests Frank Miller or Jae Lee’s inky style. Jim Lee also plays with silhouettes and reversing out foreground details in a single color from the backdrop.

The unusual style is emphasized by a desaturated color palette of grays and greens. Most characters are colored as pale white ghosts or sickly yellow specters. Any hints of red are reserved for the lines under Deathblow’s eyes, religious imagery, and bursts of occasional violence. It’s a bold, memorable choice, but the early days of digital color don’t do it full justice. The high contrast looks smudged where colors meet, and inexact gradients swallow up Lee’s penwork.

Tim Sale takes over finishes duty over Lee’s layouts in the third issue. Sale isn’t as detail-obsessed as Lee, and as he settles into his simpler style the art begins to gel more with the early digital colors. This would coalesce into a beautiful, minimalist look that would last through issue #12, though Lee would continue providing misleading hyper-detailed covers

There’s little to recommend this early run, which reads like the worst of everything Image was accused of in its early days. Even if the between-issue delays are invisible to us now, the stories are short, incoherent, and try to push as many “cool” and” x-treme!” buttons as they can in their brief page count.

Want the play-by-play? I’ll get into the nitty-gritty of Dark Image, Deathblow #1-4, and #0 below. Here’s the schedule for the rest of this month’s WildStorm re-read – tomorrow I tackle WildC.A.T.s Special #1 and WildC.A.T.s Trilogy #1-3.