It’s my second random unwrapping of a brick of book from my hardcovers shelf, and today’s selection is a doozy – it’s Marvel’s Infinity Gauntlet!

Watch as I recap the cosmic history of Jim Starlin and Silver Surfer, plus debate on if I’m going to remove the book from its plastic wrap.

Episode 3 features The Infinity Gauntlet Omnibus (Amazon / eBay) as covered by the Guide to Thanos and the Marvel Events Guide.

For an even more in depth look at this awesome book, check out this classic video from friend-of-CK Ryley Moore AKA “The Omnibus Collector.” 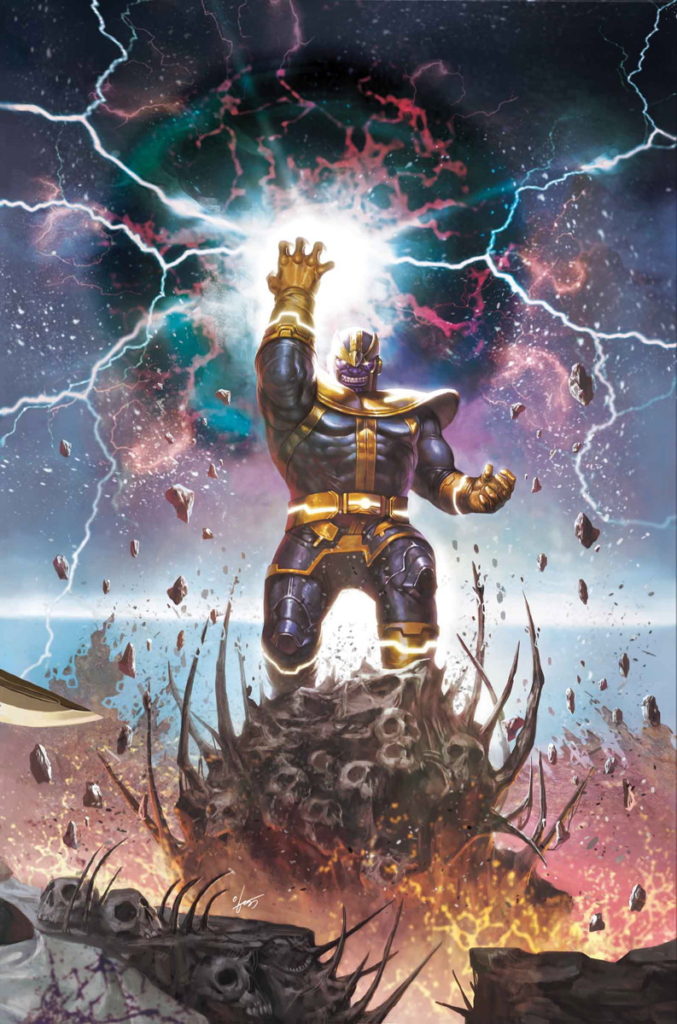 This guide isn’t only unique in focusing on a villain – it provides context for every one of Thanos’s significant comic appearances, so you can build your own ideal collection of Marvel’s Mad Titan.

Thanos made his cinematic debut in the post-credits scene in 2012’s The Avengers. From the explosion of fan fervor you’d never know that the multi-chinned purple villain had fewer than 200 in-continuity comic book appearances to his name at the time and had only once appeared in a monthly Avengers ongoing, over 35 years prior.

Originally a one-off 70s Iron Man villain, Thanos’s original notoriety came from his adoption by Jim Starlin, the creator behind the psychedelic space sagas of Captain Marvel and Adam Warlock. Thanos was the arch-nemesis of them both, but when Starlin’s initial run with Marvel wound down Thanos was shuttered along with Warlock and some of his supporting characters, revived only to usher Captain Marvel from this mortal coil in the classic Death of Captain Marvel graphic novel.

It was Starlin who again revived Thanos in the 90s during his run on Silver Surfer, this time as the only villain epic enough to assemble the entirety of Marvel’s heroes to fight him. Infinity Gauntlet was Marvel’s first linewide event with a featured mini-series plus tons of tie-ins that was centered on a singular foe. It was so successful that it spawned a pair of sequels in the following years.

After 1993, Thanos was finally unleashed on the Marvel Universe at large, but he was still used sparingly. Aside from an atypical run as a villain for Ka-Zar, Thanos stayed far away from the scrum of most of Marvel’s earthbound heroes for another 20 years! In that time he anchored another mini-series event, his own ongoing title, and was one of the main antagonists in Annihilation – the cosmic event that kicked off the line of stories that birthed Guardians of the Galaxy.

It wasn’t until Thanos’s cinematic debut that he entered the mainstream of Marvel, harassing the entire planet of heroes in Infinity while the Avengers were far afield in space. The result brought Thanos closer to the heart of Marvel’s storytelling than ever, with Jonathan Hickman using him as a central character in the run-up to Secret Wars.

Here’s the breakdown of all of Thanos’s major, most-essential appearances – each one is covered in the guide! END_OF_DOCUMENT_TOKEN_TO_BE_REPLACED

Want to learn more about the Marvel Omnibus editions that already exist and the issues they cover? My Marvel Omnibus & Oversized Hardcover Guide is the most comprehensive tool on the web for tracking Marvel’s hugest releases – it features every book, plus release dates, contents, and even breakdowns of $/page and what movies the books were released to support. END_OF_DOCUMENT_TOKEN_TO_BE_REPLACED 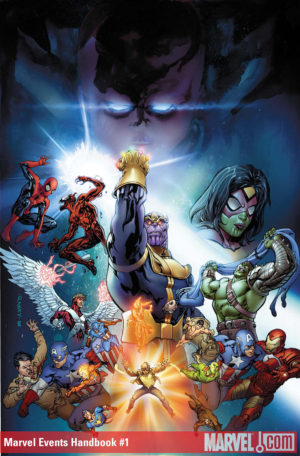 Click the links below to leap down the page to the corresponding section. I have omitted most line-specific crossovers with only one or two cross-line spinoffs, such as X-Men’s Mutant Massacre and Fall of the Hulks. END_OF_DOCUMENT_TOKEN_TO_BE_REPLACED